MessageToEagle.com – Two very remarkable islands – Kosrae and Pohnpei (“upon a stone altar”) – can be found in the Caroline Islands, a widely scattered archipelago located in the western Pacific Ocean, to the north of New Guinea and more than 1,500 miles to the east of the Philippines.

These two places are full of mysteries, particularly because of bizarre remains of ancient architecture, in form of very old megalithic cities, of which origin no one is able to guess.” 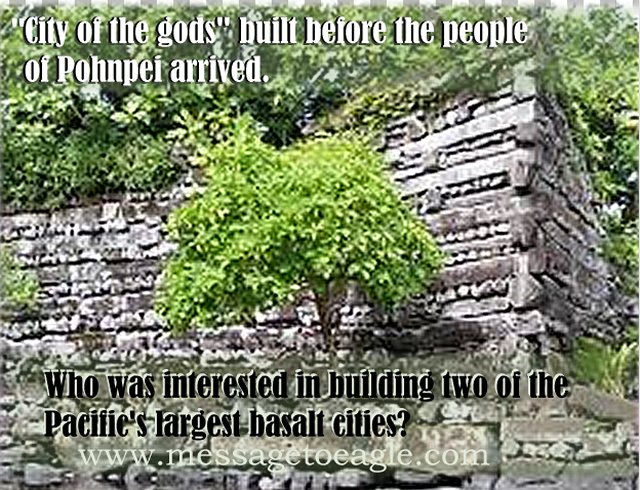 Those, who do not invalidate the myths and legends of the ancients, can ponder over some interesting legends and myths. One of them says that “magic powers” were used to transport the logs from a far-away location, by making them fly and yet another legend supports the latter, saying about a mighty “magician” who made the logs fly towards Nan Madol, where the city was constructed and a firebreathing dragon became its symbol.
Who was interested in building two of the Pacific’s largest basalt cities? 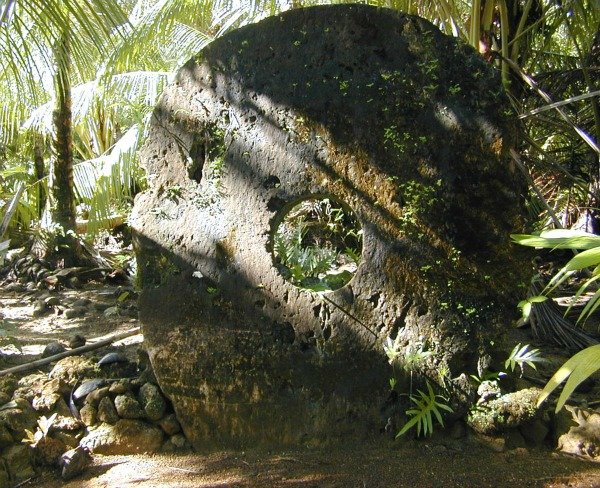 How were the huge, very heavy basalt columns and logs quarried and transported? In what manner were the walls constructed so high?

Who built the megalithic complexes, when and why were they built on both islands, at all?

Legends say that giants once lived on Ponape and archeological diggings have discovered human bones belonging to people much taller than the natives of the region. They had at their disposal the physical means to carry the heavy basalt logs and built walls as high as 50 feet and as thick as 17 feet.

The inhabitants of both islands have absolutely no idea about their origin because the ruins were already in place at the time of the arrival of the early settlers. 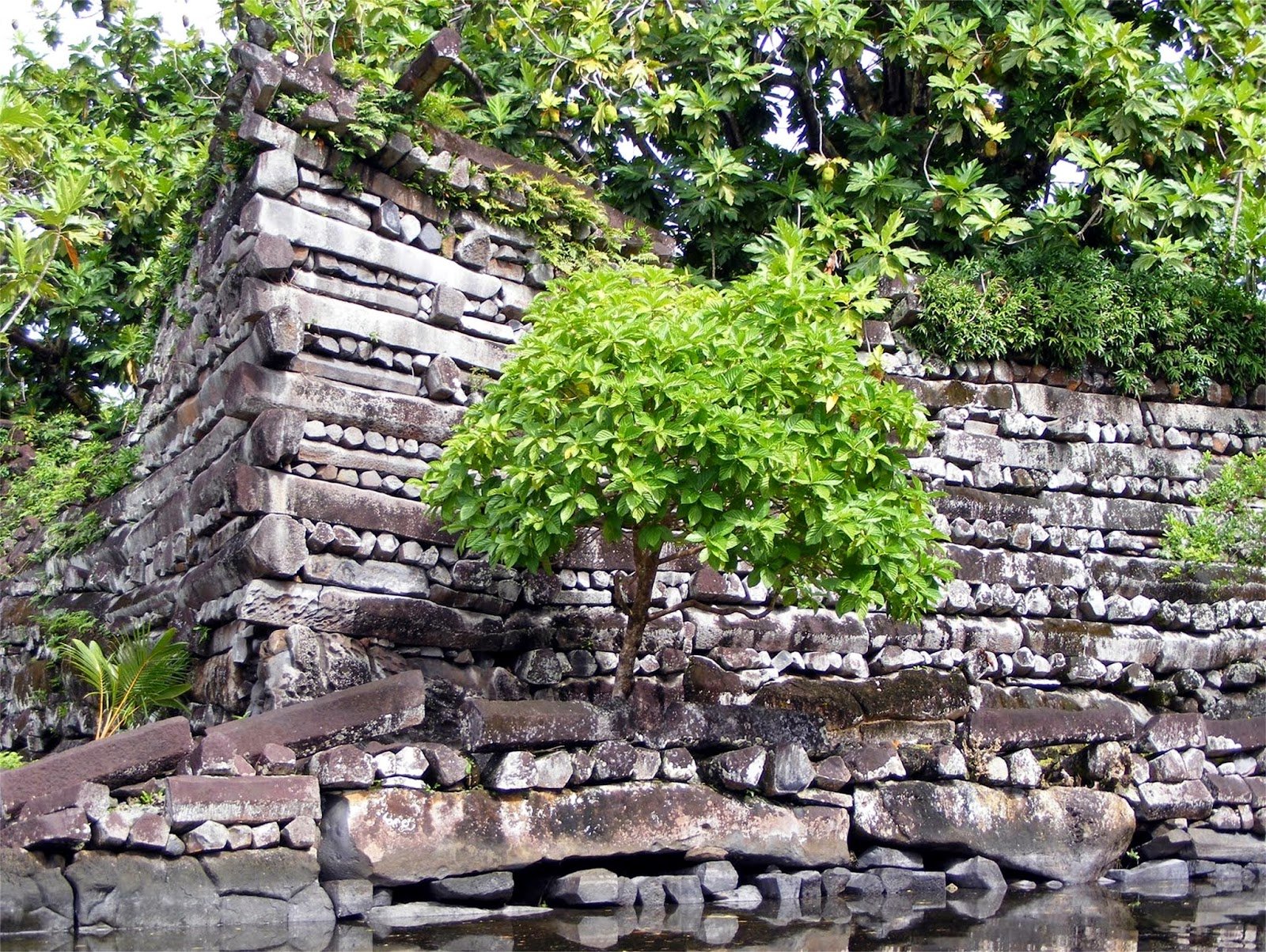 Immense columns of prismatic basalt rock, quarried from various locations around the island, formed high-walled rectangular enclosures for the coral rubble used as fill for the islets’ floor.

The ruins on the island of Kosrae are known among the white people as the “city of kings, and among the natives as “Insaru”. They were built of huge hexagonal stone blocks and many of them have a mass between 30 to 60 tons, and according to a professional opinion of civil engineers and architects, the hexagonal blocks must be cut with mathematical exactness in all their dimensions. Some of these huge blocks, even today, show traces of a very accurate machining process.

A survey conducted on the Lelu Stone Ruins of Kosrae since 1978, showed west of the hill was artificial — a 0.6-1.0 metre deep fill of coral and basalt stone, with man-made extensions of the island, which bravely resist tropical cyclones of the Pacific Ocean.

Today, the ruined city on Kosrae has been reclaimed by the jungle and it is not visited so frequently as neighboring Nan Madol on Ponape. Nan Madol is a strange place, built into the ocean (!) which means that it is not located on the dry land of Ponape Island.

The origin of the basalt building stones used to construct Nan Madol is old. Basalt was most probably transported from only one far-away location on the opposite side of the island to the coral reef. But how? 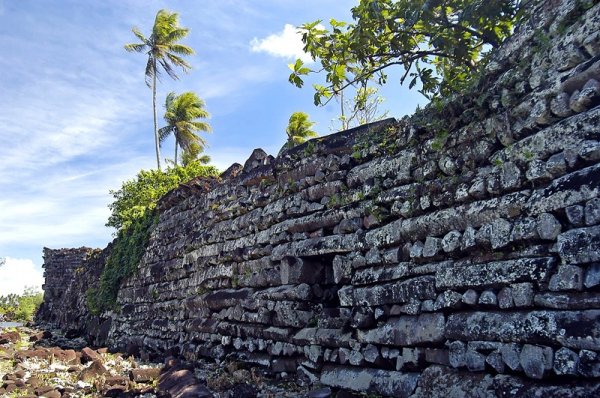 No traces of prehistoric machines were found. Archaeologists speculated that the builders used rafts. However, all attempts to use rafts to transport heavy construction material – failed because heavy, iron rich hard rock immediately sank due to its weight.

“Immense columns of prismatic basalt rock, quarried from various locations around the island, formed high-walled rectangular enclosures for the coral rubble used as fill for the islets’ floor. Built over an extended period of time, Nan Madol eventually came to consist of ninety-two artificial islets that covered an area of 200 acres.. The most spectacular of the complex’s structures, reached a height of 25 feet…” (D.L. Hanlon)

It is estimated that at least 250 million tons of basalt logs are needed to construct a city, the size of Nan Madol and relatively long distance that separates Ponape island from the larger land masses makes the history of the ruins fascinating.

At the peak of the last glacial maximum, Ponape Island was situated over a thousand kilometers to the north from the eastern edge of the Peninsula and the chain of islands, which today, partly form the Solomon Archipelago.

But the truth is that nobody knows when the megalithic complex was built and this is one of the biggest mysteries of archeology.

All that’s left of the earlier prehistoric city was named by the natives as “Nan Madol” and means “spaces between”. The name may refer to an extended system of channels but it can mean something completely different. According to some opinions, Nan Madol could have been some religious and ceremonial center, but… was it?

“No site in Oceania surpasses the dramatic beauty of ancient Nan Madol… situated on the coast of Pohnpei, the elite administrative and ceremonial center grew, flourished and declined during the centuries preceding Western contact…” (W. N. Morgan)

It is a magnificent complex of ninety-two artificial islets interconnected by a network of waterways and according to Dr. Ayres, Professor of Anthropology at the University of Oregon and a researcher at Nan Madol, with extensive experience in Pacific archaeology, “to withstand time and the sea, the artificial platforms were built in a staggeringly laborious process.”