MessageToEagle.com – Humans’ fascination with robots stretches far back in time. The ancient Chinese manufactured a number of sophisticated robots, and we encounter similar robots in ancient Greece and other parts of the world.

The Automate Therapaenis (automatic maid), a 3rd c. BC technological Greek invention is mentioned by Philo Byzantios, also known as Philo Mechanicus, a Greek inventor, engineer and writer on mechanics.

A section of Philo’s Pneumatics which so far has been regarded as a later Arabic interpolation, includes the first description of a water mill in history.

Among his inventions we also find the oldest known application of a chain drive in a repeating crossbow. He was also the first to describe a gimbal: an eight-sided ink pot with an opening on each side could be turnt so that any face is on top, dip in a pen and ink it-yet the ink never runs out through the holes of the side.
The replica of the automatic maid is now on display at the Museum of Ancient Greek Technology, in Katakolo Ileias, the Peloponnese, Greece. The Automate Therapaenis is considered by some scientists to be the world’s first robot, but it’s not. There are ancient robots that are older.

Nevertheless, it is undoubtedly an intriguing ancient invention.
The maid was actually a life-sized doll holding an oenochoe (wine-jug) with its one hand, having the other hand free and extended to receive a drinking vessel. 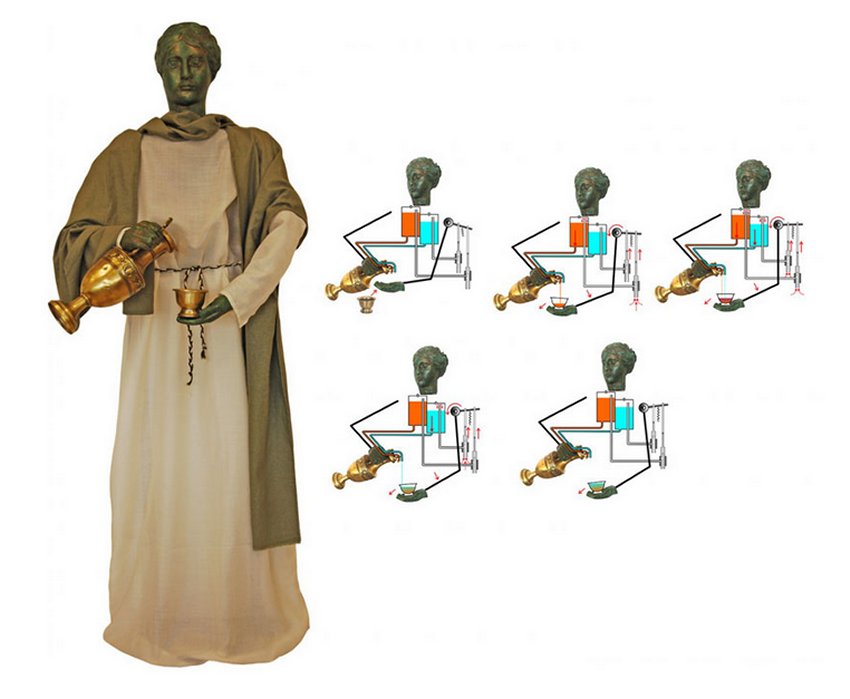 The doll had a mechanism transferring wine and water from two pots interred in its body, to the jug she was holding, through tubes passing along her hand.

Another set of tubes, going through her free hand and her body too, were there to enable pouring liquids by providing air.

When somebody was placing a drinking vessel on her free hand, the wine (first) and the water (second) would come automatically from the wine-jug and they would stop once the drinking vessel was lifted.

Ancient Quest For Mechanical Life: Humanoid Robots Of Our Ancestors

Gods And Their Advanced Technologies: Talos A Greek Robot Created By The God Of The Forge

Kostas Kotsanas, creator of the exhibition at the Museum of Ancient Greek Technology notes that the bolts and nuts, gears and rules, pulleys and belts, sprockets and roller chains, pistons and cylinders, springs, hydraulic controllers and valves, programming devices and auto-pilots (all parts of the engine of a modern car) are just some of the inventions of the ancient Hellenes which were the foundations of their complex technology.
“These unique legacies continue to constitute today the building blocks of our modern technology, the development of which would be doubtful without the free and undemanding adoption of this ancient know-how. Humanity simply needed to mature another millennium in order to ‘recover’ this remarkable forgotten technology.

The exploration of this age, when no claim to ownership of peak technology was made, demonstrates how much more (than we think) modern western technological civilization owes to the Greeks.”

The exhibition is on view at the Museum Herakleidon from the 1st of August through January 10th 2016.