MessageToEagle.com – When and where did we start playing football?

There are a number of references to traditional, ancient, or prehistoric ball games, played by indigenous peoples in many different parts of the world. The history of football stretches far back in time.  According to FIFA the competitive game cuju is the earliest form of football for which there is scientific evidence

Cuju is an ancient Chinese ball game, Cantonese “chuk-ko”. It is a competitive game that involves kicking a ball through an opening into a net. The first mention of cuju in a historical text is in the Warring States era Zhan Guo Ce, in the section describing the state of Qi. It is also described in Sima Qian’s Records of the Grand Historian (under Su Qin’s biography), written during the Han Dynasty. A competitive form of cuju was used as fitness training for military cavaliers, while other forms were played for entertainment in wealthy cities like Linzi.

During the Han Dynasty (206 BC-AD 220), the popularity of cuju spread from the army to the royal courts and upper classes. It is said that the Han emperor Wu Di enjoyed the sport. At the same time, cuju games were standardized and rules were established. Cuju matches were often held inside the imperial palace.

Modern football has its origins in the streets of medieval England. Neighboring towns would play each other in games where a heaving mass of players would struggle to drag a pig’s bladder by any means possible to markers at either end of town. Football became so violent in England it was banned by the king for more than 300 years. 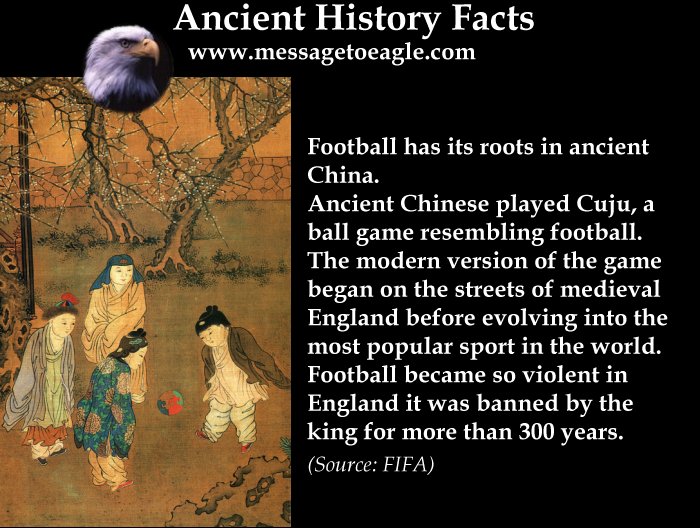