MessageToEagle.com – Centuries ago, Timbuktu – sometimes called the city of 333 saints – was most famous as a center of scholarship.

The city was once home to nearly 100,000 ancient manuscripts, some dating back to the 12th century, preserved in family homes and private libraries.

From the early 14th to late 16th centuries Timbuktu was famous for its wealth. It grew rich, between the gold mines to the south and the salt mines in the Sahara.
In the 14th century two-thirds of the world’s gold came from west Africa, a large proportion of it passing through Timbuktu, where it was transferred from the river to trans-Saharan caravans, from canoe to camel.
However, Timbuktu is first of all related to books, ancient manuscripts, priceless intellectual heritage representing literary remnants from Timbuktu’s flourishing fifteenth century. 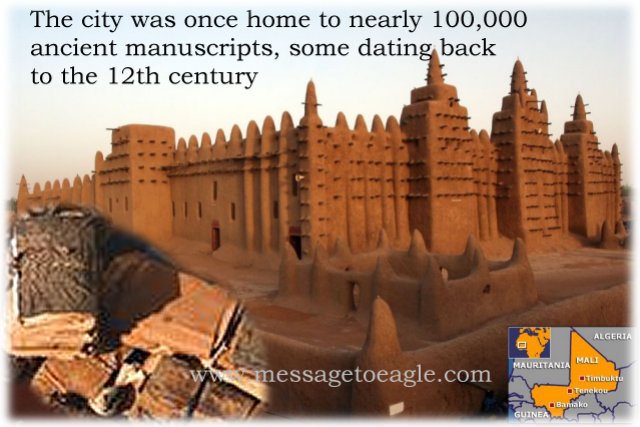 Timbuktu was a thriving center of learning, and manuscripts were highly prized: a historical Renaissance-era traveler Leo Africanus (c. 1494 – c. 1554), who visited in 1510, found books sold for more money than any other merchandise in the city’s market.
In Timbuktu’s golden age, sophisticated travelers would arrive with books known to be rare. Manuscript collecting in Timbuktu was popular during this period, and books reached Timbuktu from many different places by caravan from Fez, Cairo, Tripoli and Córdoba.

What the scholars couldn’t buy, their students would copy by hand at the universities. Other documents were written in Timbuktu.
The vast libraries that resulted included every subject: astronomy and medicine, law, theology, grammar and proverbs.

There were biographical dictionaries, diaries, letters between rulers and subjects; legal opinions on slavery, coinage, marriage and divorce; the lives of Muslims, Jews and Christians; there were histories and poetry. 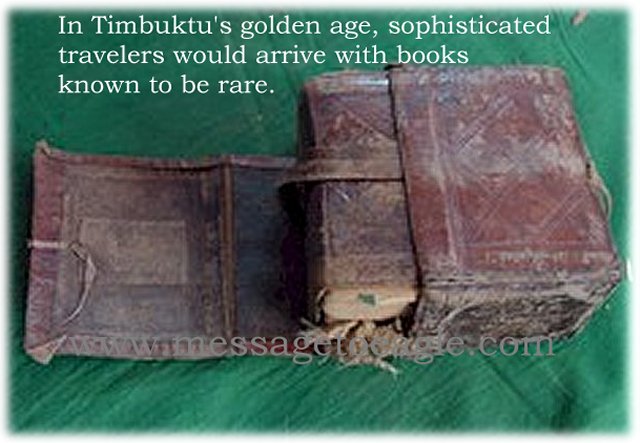 Then, the city’s decline came but hidden in cellars or buried, hid between the mosque’s mud walls and safeguarded by their patrons, many of the manuscripts survived.

At the end of January 2013, it was reported that rebel forces destroyed many of the manuscripts before leaving the city. However there was no malicious destruction of any library or collection as most of the manuscripts were safely hidden away.

Through the efforts of the so-called “desert librarians” who are extremely committed to their culture of learning, sharing and first of all protecting, Timbuktu’s intellectual legacy or at least part of it, is safe.
In his book “To Timbuktu for a Haircut: A Journey Through West Africa”, Rick Antonson writes:

“There are 700,000 manuscripts in Timbuktu. Their discovery has been called “The greatest archeological find since the Dead Sea scrolls.” Included in the cache are Moorish books with bug-riddled bindings, Islamic pamphlets covered with sand, ninth-century treatises baked by time, and scholarly pages a phase away from dust…”
“Ignorance impeded their preservation over the centuries, and continued lack of awareness facilitated their slow disappearance – the loss of history’s book one page at a time. Were they housed together, collected in temperature-controlled rooms, and catalogued from Arabic to Tuareg to Zahara, these manuscripts would be esteemed one of the world’s bibliographic miracles. They are considered less a treasure only because of their scattered and deteriorating condition…”
Many of the manuscripts are still missing. They most probably still exist but it is difficult to find them.

“Seeing those manuscripts today causes dismay. Often they lie in the homes of those who cannot read, and who perhaps do not know of the treasures they possess. Or the documents are crammed into the forgotten corners of mud buildings. Individual manuscript pages have been sold to travelers for food, thus disappearing from their family, from Timbuktu, from the public domain…”
The manuscripts of Timbuktu are a living testimony of the highly advanced and refined civilization in Sub-Saharan Africa. 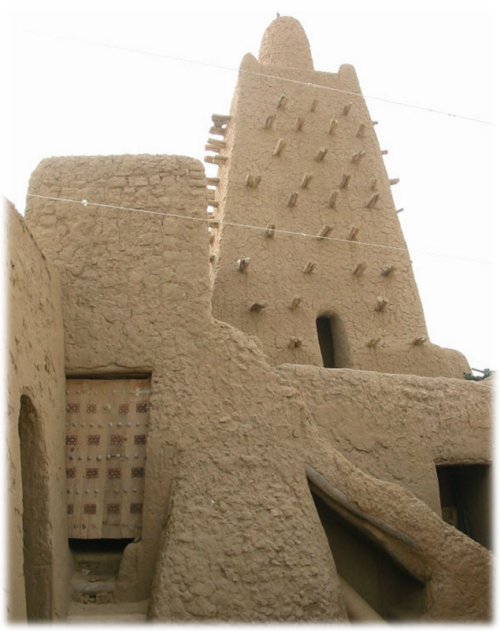 Ancient texts were accumulated from generation to generation, and represents a vast knowledge of the 14th and 15th centuries: court works, texts on the harms of tobacco, descriptions of medicines and remedies; manuscripts on law, language, religion, and mathematics, with a variety of comments in the margins from the scientists of Cordoba, Baghdad or Djenne.
Even before the European Renaissance, Timbuktu flourished as the greatest academic and commercial center in Africa. Great empires such as Ghana, Mali, and Songhai were proofs of the talents, creativity, and ingenuity of the African people. The University of Timbuktu produced both Black African scholars and leaders of the highest rank, character, and nobility. Once, Timbuktu was home to jurists, priests, scribes and many other intellectuals and prospered both intellectually and commercially. 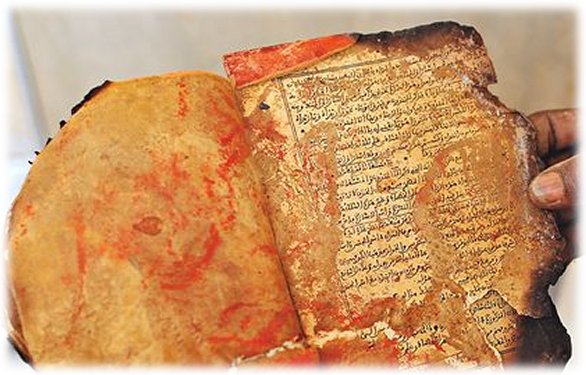 Almost mythical city of Timbuktu known as the “City of 333 Saints”, dates as far back as the fifth century. Almost everything was buried for centuries under the sands, there is still much to recover.

Fight for old precious manuscripts, books and intellectual heritage of Timbuktu must continue. 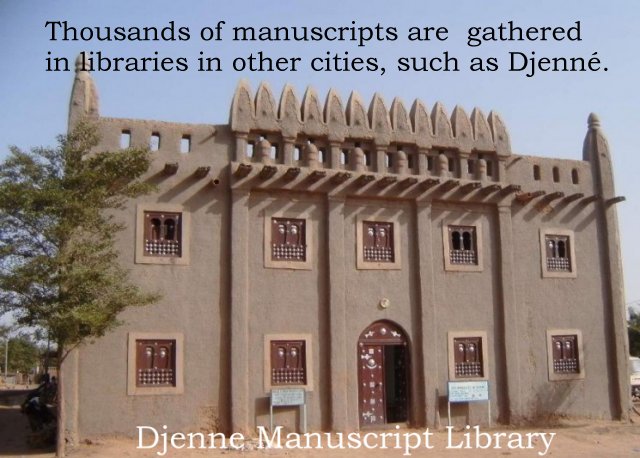 “On 28 January 2013, Timbuktu fell to French and Malian soldiers. The departing rebels set fires in several buildings, including the new Ahmed Baba library. By the time the fire was brought under control, the floor was scattered with the charred remains of manuscripts,” reported The Guardian.

According to researcher Mohamed Diagayeté, more than 95% of Timbuktu’s manuscripts were by then secretly placed in Bamako; 4,203 manuscripts belonging to the Ahmed Baba Institute were lost, either burnt or stolen.

“In the context of 400,000 the number is small, but far from insignificant. No one knows exactly what those manuscripts contained. “I think people were very affected by the loss,” says Diagayeté, “because every manuscript is different. Some manuscripts don’t have copies, and if they are gone, they are gone for ever,” Diagayeté said. 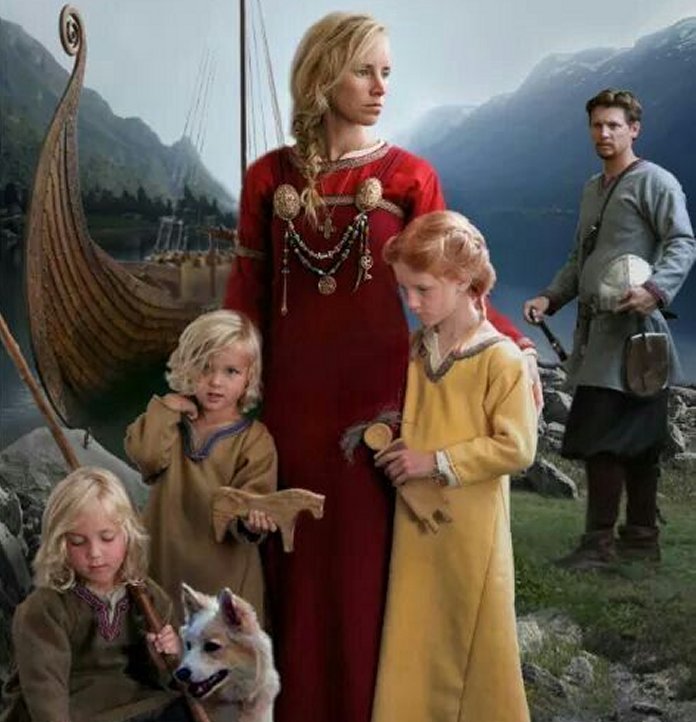