Eddie Gonzales Jr. – MessageToEagle.com – Large amounts of oxygen in the atmosphere of one of the oldest and most elementally depleted stars known-a “primitive star” scientists call J0815+4729 have been detected by astronomers from the University of California San Diego, the Instituto de Astrofísica de Canarias (IAC), and the University of Cambridge. 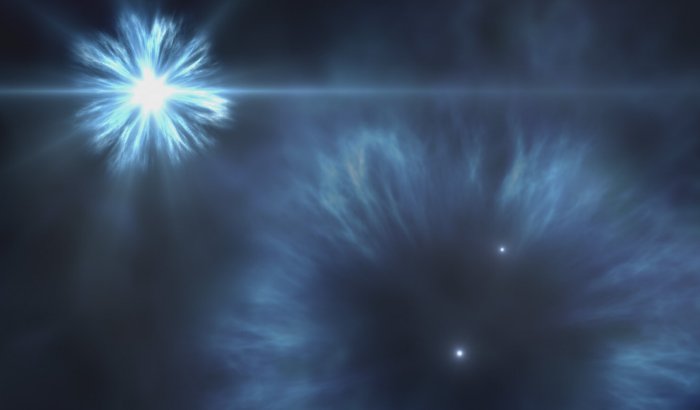 Artistic image of the supernova explosions of the first massive stars that formed in the milky way. The star j0815+4729 was formed from the material ejected by these first supernovae. Credit: Gabriel Pérez, SMM (IAC)

The third most important element in the universe after hydrogen and helium is oxygen. It’s vital for all forms of life on Earth, as it serves as a chemical basis of respiration and a building block of carbohydrates, as well as the main element in the Earth’s crust.

Oxygen did not exist in the early universe; it emerged much later – about 2.4 billion years ago. To trace the early production of oxygen and other elements requires studying the oldest stars still in existence. J0815+4729 is one such star; it resides over 5,000 away toward the constellation Lynx and was observed by the team using Keck Observatory’s High-Resolution Echelle Spectrometer (HIRES) on the 10m Keck I telescope.

“Stars like J0815+4729 are referred to as halo stars,” explained UC San Diego Professor of Physics Adam Burgasser, a co-author of the study said in a press release.

“This is due to their roughly spherical distribution around the Milky Way, as opposed to the more familiar flat disk of younger stars that include the sun.”

J0815+4729 star was first identified in data obtained with the Sloan Digital Sky Survey (SDSS), then characterized by the IAC team in 2017 using the Grand Canary Telescope in La Palma, Spain. Halo stars like J0815+4729 are truly ancient stars, allowing astronomers a peek into element production early in the history of the universe.

“The primitive composition of the star indicates that it was formed during the first hundreds of millions of years after the Big Bang, possibly from the material expelled from the first supernovae of the Milky Way,” said Jonay González Hernández, an IAC Ramón y Cajal postdoctoral researcher and lead author of the study.

The observations revealed a very unusual chemical composition. While it has relatively large amounts of carbon, nitrogen, and oxygen-approximately 10, 8, and 3 percent of the abundances measured in the Sun-other elements like calcium and iron have abundances around one-millionth that of the Sun.

“Only a few such stars are known in the halo of our galaxy, but none have such an enormous amount of carbon, nitrogen, and oxygen compared to their iron content,” said David Aguado, a postdoctoral researcher at the University of Cambridge and co-author of the study.