MessageToEagle.com – Binary stars are well-known and even trinary systems may be common but most of them are crowded together and thus, difficult to find and study.

Additionally, it has long been considered they are inhospitable to planets. 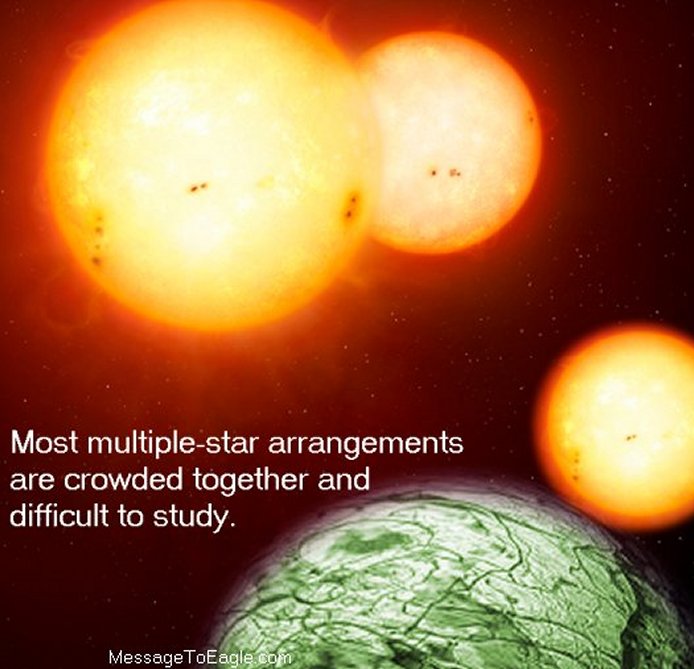 “With three suns, the sky view must be out of this world,” said Maciej Konacki, a NASA-funded Polish astronomer at the California Institute of Technology, Pasadena when he discovered a truly alien world where the sun sets over the horizon, followed by a second sun and then a third.

This extraordinary discovery took place more than 6 years ago. A total of 725 such planets have been identified as of January 14, 2012 and the seeking out worlds orbiting distant stars continues.

“Here I report the detection of an unusual hot Jupiter orbiting the primary star of a triple stellar system, HD 188753. The planet has an orbital period of 3.35 days and a minimum mass of 1.14 times that of Jupiter;” Dr. Konacki wrote in Nature, the prestigious international journal for science in 2005.

The new planet, called HD 188753 Ab, was at that time, the first known to reside in a classic triple-star system. The masses of the three stars in HD 188753 system range from two-thirds to about the same mass as our Sun. The planet is slightly more massive than Jupiter. Computer simulations conducted by scientists suggest that planets in multi-star systems may look exotic and host exotic forms of life as well.

According to the astronomer and discoverer, the sky view from such exotic planet, with an occasional triple sunset, would certainly be spectacular.

“Multiple-star systems have not been popular planet-hunting grounds,” said Konacki. “Before now, we had no clues about whether planets could form in such gravitationally complex systems.” 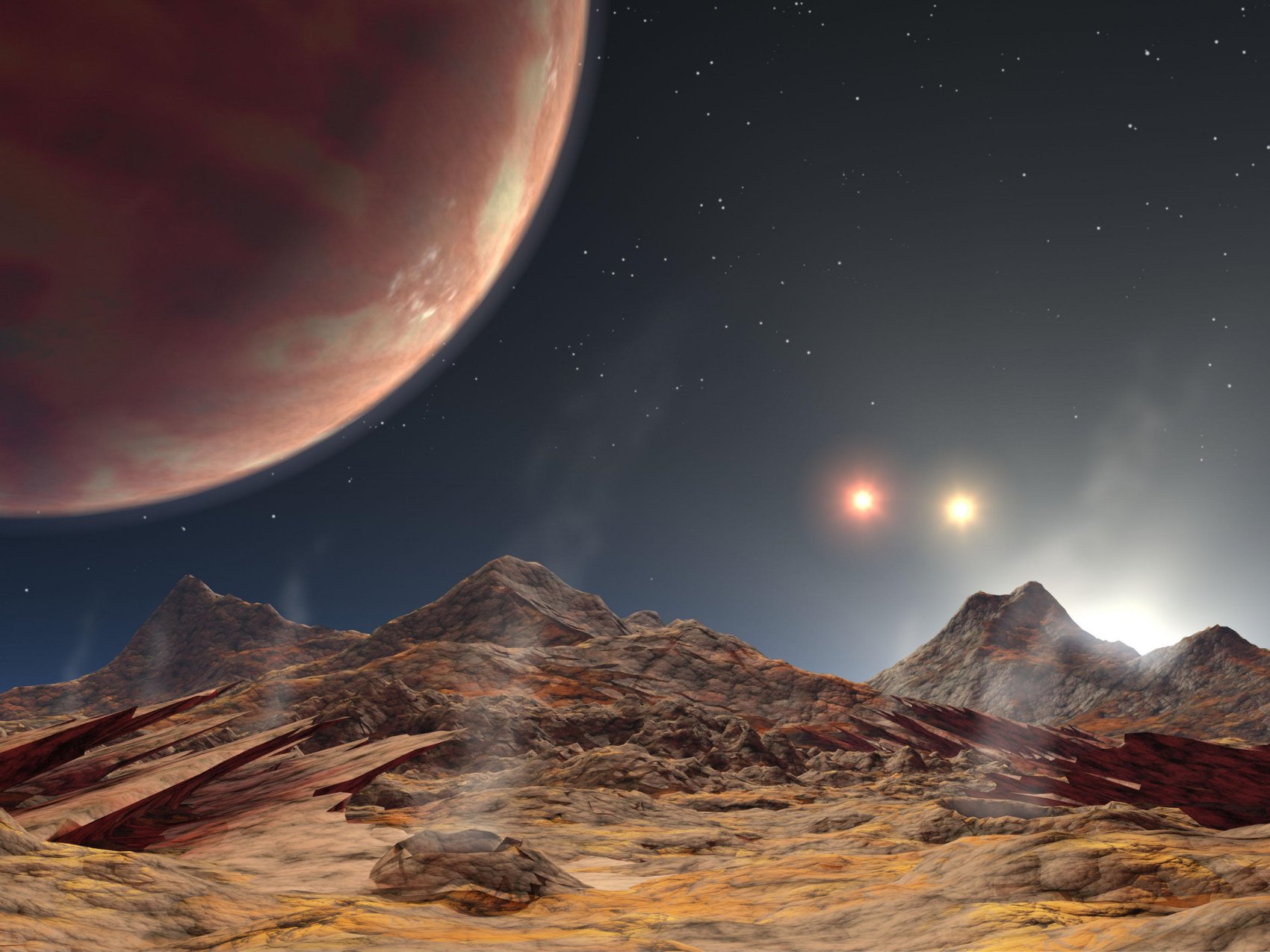 The new planet belongs to a common class of extrasolar planets called “hot Jupiters,” which are gas giants orbiting with periods of 3?9 days around Sun-like stars. They are believed to form in a disk of gas and condensed matter at or beyond ~2.7 astronomical units (au?the Sun?Earth distance) from their parent star.

Although it looks like fiction, this artist’s vision of sunset on an alien world is based on fact — the recent discovery of a hot, jupiter-sized planet orbiting in triple star system HD 188753. Only 149 light-years away in the constellation Cygnus, HD 188753’s massive planet was detected by astronomer Maciej Konacki after analyzing detailed spectroscopic data from the Keck Observatory.

The large planet itself is depicted at the upper left in this imagined view from the well-illuminated surface of a hypothetical rocky moon. From this perspective, the closest, hottest and most massive star in the triple system, a star only a little hotter than the Sun, has set below distant peaks.

The two other suns nearing the horizon are both cooler and farther from the large planet. While other hot, jupiter-like planets are known to orbit nearby stars, the “crowded” multiple star nature of this system challenges current theories of planet formation. Illustration Credit: courtesy JPL-Caltech, NASA

At such distances, there exists a sufficient amount of solid material to produce a core capable of capturing enough gas to form a giant planet. Subsequently, they migrate inward to their present close orbits.

In this case, the planet whips every 3.3 days around a star that is circled every 25.7 years by a pirouetting pair of stars locked in a 156-day orbit.

Systems with multiple stars are widespread throughout the universe, accounting for more than half of all stars. For example, our Sun’s closest star, Alpha Centauri, is a member of a trio.

Based on recent discoveries, astronomers estimate that within 500 pc of the Sun, there are about 1200 planetary systems that, like HD 188753, have orbital parameters definitely unfavorable for forming giant planets, because the current outer orbit of the triple is too tight for a Jupiter-like planet to have formed elsewhere and migrated to its current location.

However, the fact remains that such a planet ex?sts and it will certainly puzzle astronomers for a while until they can explain how this planetary system formed.

This discovery is without doubt very interesting but has not been officially confirmed. It does however not exclude a possibility that this planet exists in a triple star system HD 18875.