Question: Where have the world’s highest tides been recorded?

Answer: The Bay of Fundy has the highest tides in the world.

The Bay of Fundy is a bay on the Atlantic coast of North America, on the northeast end of the Gulf of Maine between the Canadian provinces of New Brunswick and Nova Scotia, with a small portion touching the U.S. state of Maine.

The height of the tide difference ranges from 3.5 meters (11ft) along the southwest shore of Nova Scotia and steadily increases as the flood waters travel up the 280 km (174 miles) of shoreline to the head of the Bay where, in the Minas Basin, the height of the tide can reach an incredible 16 meters (53ft).

Twice everyday the Bay of Fundy fills and empties of a billion tones of water during each tide cycle and that is more than the flow of all the world’s freshwater rivers combined. The force created by these mighty waters is equal to 8000 locomotives or 25 million horses at the Minas Channel.

In the World’s Highest Tides Ecozone, you can view two high and two low tides each 24-hour period. The time between a high tide and a low tide is, on average, six hours and 13 minutes.

Tides are considered the heartbeat of our planet’s oceans. They are the periodic rise and fall of the earth’s bodies of open water, and are a result of the gravitational pull of the moon and sun on the earth, as well as the perpetual spinning rotation of the earth itself. 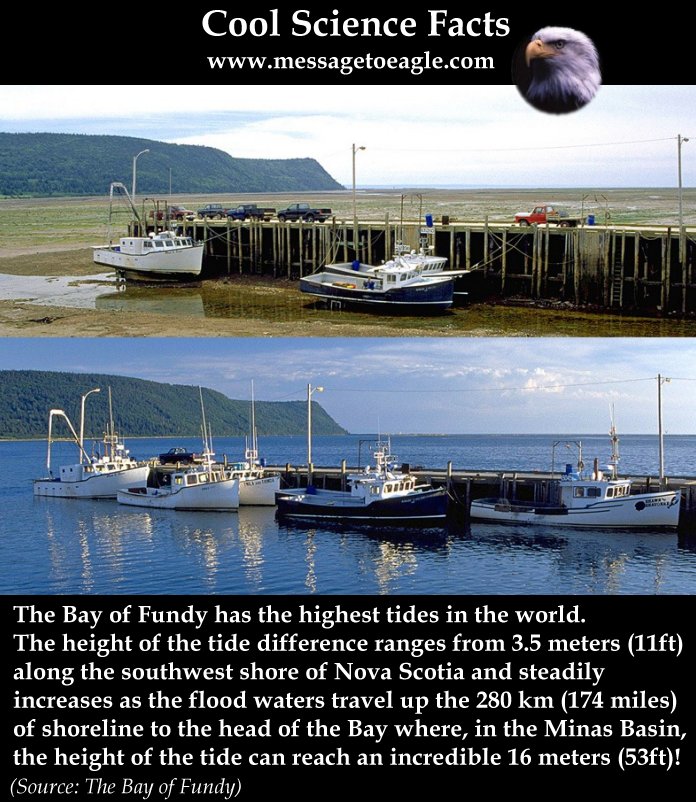