MessageToEagle.com – Only found in Bohol, Philippines, the Chocolate Hills are one of the world’s natural wonders and a unique sight for this region of the country.

There are 1,776 perfectly cone-shaped hills that look like made of chocolate. They are spread over an area of more than 50 square kilometers and their height is approximately from 100 to 160 feet, though the highest hill is almost 400 feet high.

Bohol is about 700 kilometers directly south of Manila, the capital city of the Philippines.

The Chocolate Hills consist of grass-covered limestone that turns brown during the dry season on the island.

They are believed to be like small pyramids that emit frequency, which has connection with the stars and planets and the cosmic energies of the universe.

Other legends say the story of two fighting giants who hurled rocks, boulders, and sand at each other. The fighting lasted for days, and exhausted the two giants.

In their exhaustion, they forgot about their fight and became friends, but when they left, they forgot to clean up the mess they had made during their battle and so… the Chocolate Hills remained forever. 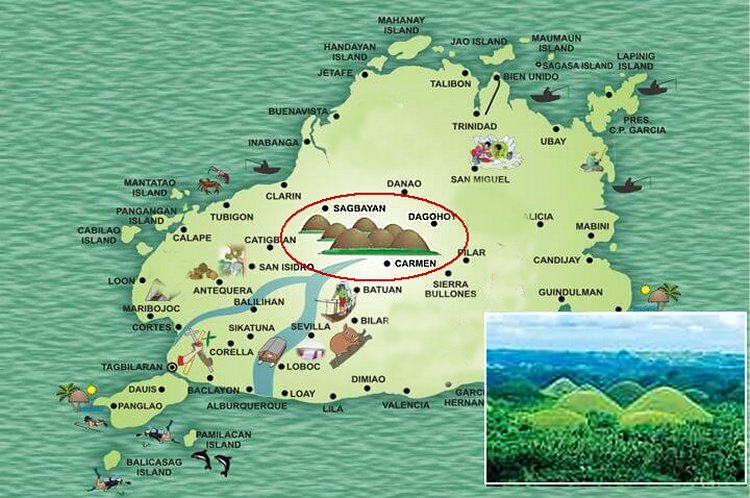 These are just stories and we don’t need to believe in them.

However, the truth is, we cannot exactly explain the origin of the Chocolate Hills and how they formed.

They consist of limestone and their present form could be a result of the ongoing millions of year-old depletion of this mineral by the rains. However, they differ fundamentally from other forms of this type, because they do not have any system of caves and underground passages, usually encountered in similar limestone areas.

Other theories propose diverse geological explanations ranging from oceanic volcano activity to limestone weathering. A recent theory is that an ancient volcano self-destructed and chunks of it were dispersed over the region.

These strange almost symmetrical structures rise up tightly next to each other, like stacks of hay in a meadow.