Question: What is the connection between comet Swift-Tuttle and the Perseid meteor shower?

Answer: Comet Swift-Tuttle, whose debris creates the Perseids, is the largest object known to make repeated passes near Earth. While the comet poses no threat to the planet for the foreseeable future, it is a very large object. Its nucleus of 6 miles (9.7 kilometers) in diameter is about the same size as the one that crashed into Earth about 66 million years ago and killed the dinosaurs.

The Perseids meteor shower happens every August. Swift-Tuttle was discovered independently by two astronomers, Lewis Swift and Horace Tuttle, in 1862. When it last made a pass by Earth in 1992, it was too faint to be seen with the naked eye. The next pass, in 2126, could make it a naked-eye comet similar in brightness to the 1997 Hale-Bopp comet — providing that predictions are correct.

See also: Vredefort Crater Is The Largest And Oldest Impact Crater On Earth

A prediction from a few years ago said that Swift-Tuttle could collide with Earth during its next pass, but examining the record of past comets showed that its orbit is far more stable than that. Swift-Tuttle poses no danger to Earth for the foreseeable future, although in a millennium it is expected to pass within a million miles (1.7 million kilometers) of the planet. 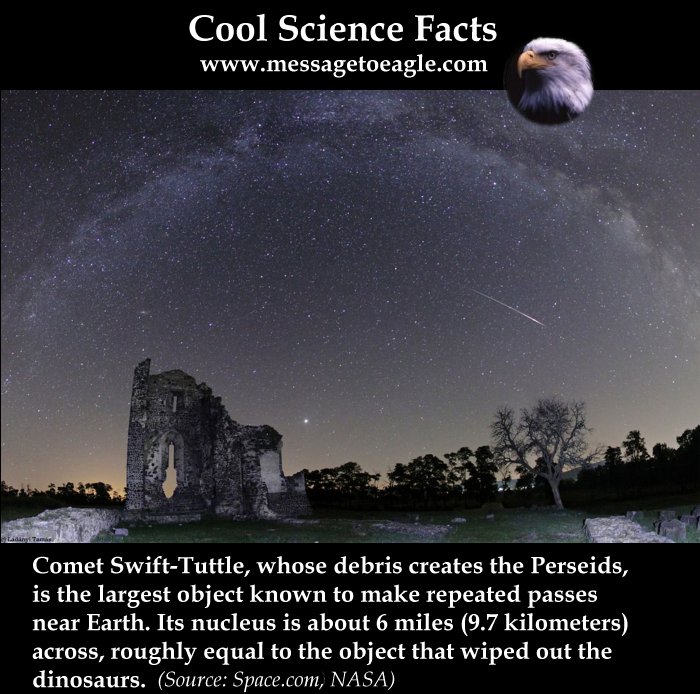