MessageToEagle.com – Ceres – the only dwarf planet in the inner solar system is a dynamic body that continues to evolve and change, according to observations made by NASA’s Dawn mission.

Recently exposed deposits found by NASA’s Dawn mission indicate changes in Ceres’ surface and the image of the dwarf planet Ceres changes all the time. 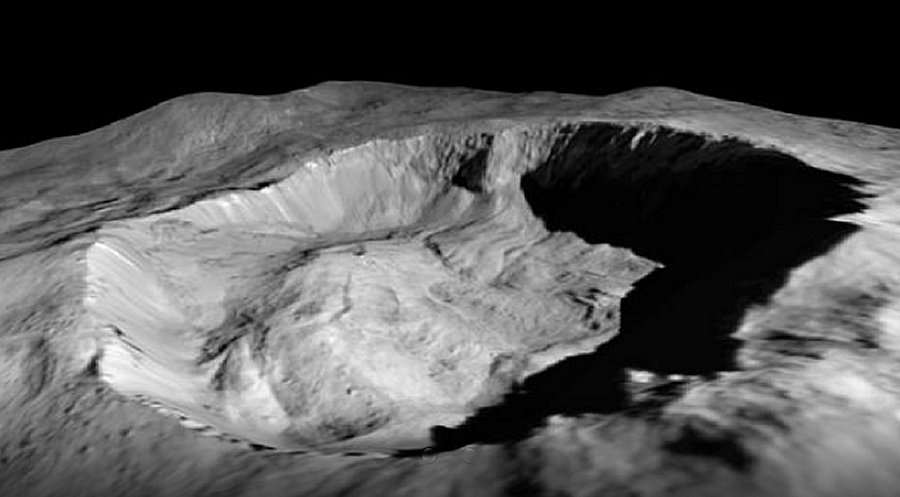 This view from NASA’s Dawn mission shows where ice has been detected in the northern wall of Ceres’ Juling Crater, which is in almost permanent shadow. Image credit: NASA/JPL-Caltech/UCLA/MPS/DLR/IDA/ASI/INAF

“This is the first direct detection of change on the surface of Ceres,” said Andrea Raponi of the Institute of Astrophysics and Planetary Science in Rome, who led the study.

The team found changes in the amount of ice exposed on the dwarf planet.

Earlier observations found water ice in a dozen sites on Ceres and the abundance of ice on the northern wall of Juling Crater, a crater 12 miles (20 kilometers) in diameter. 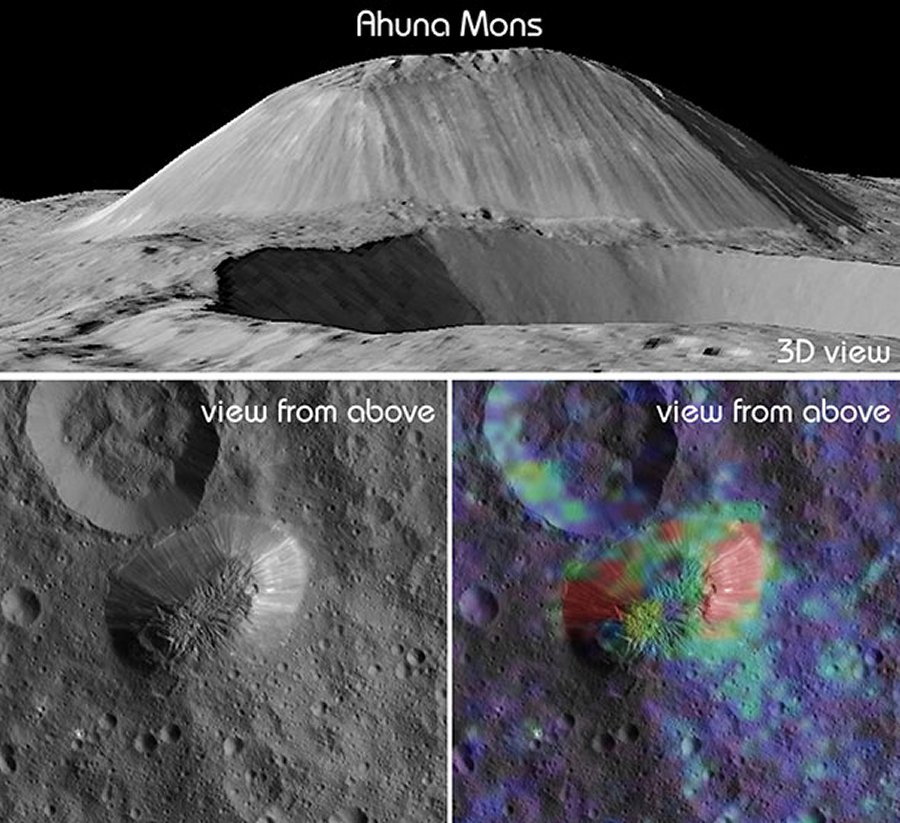 This view from NASA’s Dawn mission shows Ceres’ tallest mountain, Ahuna Mons, 2.5 miles (4 kilometers) high and 11 miles (17 kilometers) wide. This is one of the few sites on Ceres at which a significant amount of sodium carbonate has been found, shown in green and red colors in the lower right image. Credit: NASA/JPL-Caltech/UCLA/MPS/DLR/IDA/ASI/INAF

“The combination of Ceres moving closer to the sun in its orbit, along with seasonal change, triggers the release of water vapor from the subsurface, which then condenses on the cold crater wall,” Raponi said.

“This causes an increase in the amount of exposed ice. The warming might also cause landslides on the crater walls that expose fresh ice patches.”

This study, led by Giacomo Carrozzo of the Institute of Astrophysics and Planetary Science, identified 12 sites rich in sodium carbonates and examined in detail several areas of a few square miles that show where water is present as part of the carbonate structure.

Water ice is not stable on the surface of Ceres over long time periods unless it is hidden in shadows, as in the case of Juling. Similarly, hydrated carbonate would dehydrate, although over a longer timescale of a few million years.

“This implies that the sites rich in hydrated carbonates have been exposed due to recent activity on the surface,” Carrozzo said.

The great diversity of material, ice and carbonates, exposed via impacts, landslides and cryovolcanism suggests Ceres’ crust is not uniform in composition.