MessageToEagle.com – The universe is changing and stars are changing as well, even if they appear static and predictable every night.

Wolf-Rayet stars remain a fascinating subject of research for astronomers even if the first of them were discovered more than 140 years ago.

In the summer of 1867, two French astronomers Charles Wolf (1827–1918) and Georges Rayet and Georges Rayet (1839–1906) observed for the first time three strange objects during a visual spectroscopic study of stars in the constellation Cygnus at the Observatoire de Paris, France.

These three stars known as “Wolf-Rayet Stars” were indeed very strange in the same way as the others in this group. They are evolved, massive stars, which are losing mass rapidly due to very strong stellar wind, with speedsup to 2000 km/s.

The sun has a comparatively chilly surface temperature of just 5,500 degrees Celsius (9,932 Fahrenheit).

Their spectra show a great variety of combinations of continuous spectrum and bright bands. 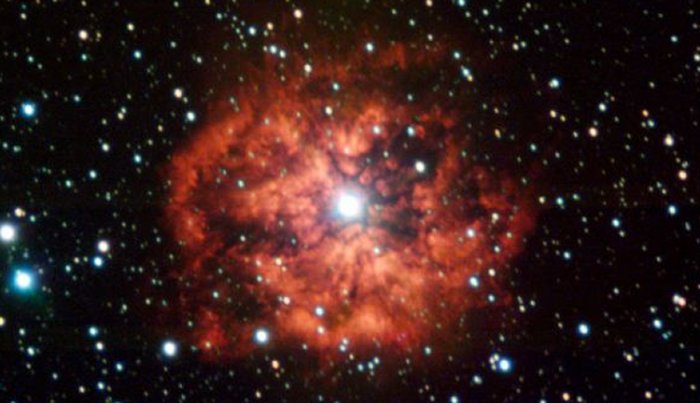 M1-67 is the youngest wind-nebula around a Wolf-Rayet star, called WR124, in our Galaxy. Credit: ESO

It is believed that the continuous spectrum in such a star comes from the more condensed central part, or core, and that the bright-line light proceeds from a hot atmosphere extending far out from the core.

Due to their strong emission lines, they can be identified in nearby galaxies and now hundreds of Wolf-Rayet stars have been catalogued in our Milky Way Galaxy.

Thanks to deep photometric and spectroscopic surveys of the Galactic plane, the number of catalogued Wolf-Rayet Stars are growing with each year.

Many of them have been discovered in M33, a nearby Galaxy.

The Wolf-Rayet phase, which lasts less than 500 000 years, is in fact the “Swan song” of the most massive stars, shortly preceding their explosion as supernova. 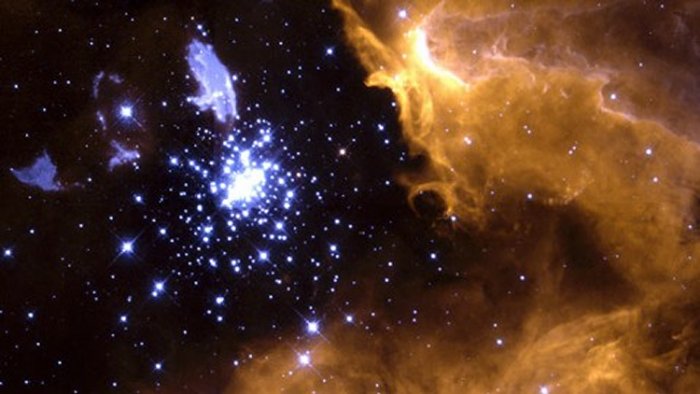 The galactic nebula NGC 3603, seen by the Hubble telescope, with a cluster of variable Wolf-Rayet stars at its center. NASA/STScI

Most stars eject a very small part of their atmosphere in their surroundings: this phenomenon is called a “stellar wind”. The wind of Wolf-Rayet stars is billions of times stronger than the Sun’s.

For comparison, at this pace the Sun would be completely devoid of gas in less than 50 000 years!

Astronomers believe this variability is caused by a disc of dust which lies almost edge-on when viewed from Earth, which periodically obscures the star.

These are named after (and share many observational characteristics with) Wolf–Rayet stars, which are much larger.

Why the similarity? Both Wolf–Rayet and Wolf–Rayet type stars are hot and bright because their helium cores are exposed: the former because of the strong stellar winds characteristic of these stars; the latter because the outer layers of the stars have been puffed away as the star runs low on fuel.

The evolutionary status of the Wolf–Rayet stars is still not fully understood.