A. Sutherland – MessageToEagle.com – The Celts are a mysterious people who played a very important role in the history of ancient Europe.

In this article, we take an in-depth look at the people of Central and Northern Europe and examine facts and history about the Celts.

The Celts were a people living in large parts of Europe during the Bronze Age and Iron Age.

They dominated over the majority of the extremely diverse population groups that are known to have inhabited certain regions at that time in Europe.

Celtic roots are found in the Rhine and the Danube, where their ancestors settled around 2000 BC in what is now western Austria, Bavaria, and Switzerland; it has been confirmed by archaeological discoveries in the town of La Tene (Switzerland).

But to exactly trace the lineage of the Celts back to antiquity is very difficult because of a lack of written history of Europe in distant past.

The Celts exerted a strong influence on other European inhabitants, which is still visible, particularly in the culture of Wales, Ireland and Scotland.

Culture of these intriguing people had many faces; depending on where they lived, they led a different life occupied with agriculture, trade, sailing, fishing or were engaged in handicrafts.

The Celts did not build cities but lived in small villages or strongholds called “oppidum”. They could use a potter’s wheel and used the vehicles equipped with wheels, including the war chariot.

Celtic society was organized into three groups: farmers and craftsmen, warriors and priests. Most appreciated were priests, the bards creating poetry, and the druids, who were both the keepers of knowledge about religion, nature, and history, as well as teachers, communicating their knowledge further and enjoying considerable authority. They were also chief advisers and solved conflicts and disputes. 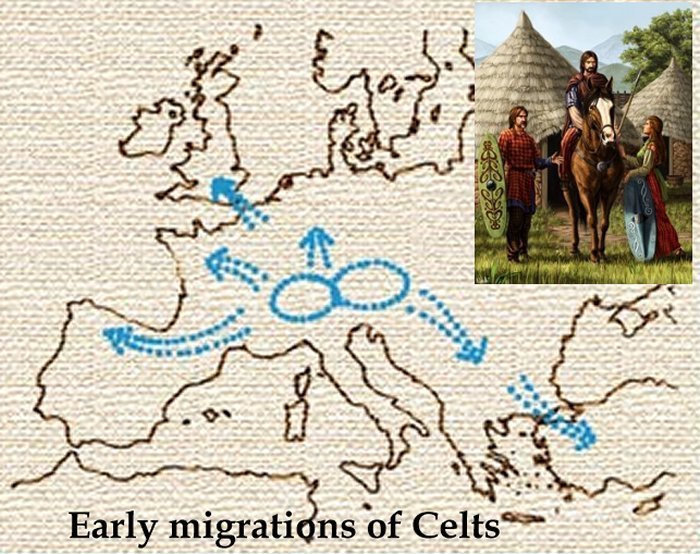 The typical family consisted of two generations, parents and children , or more broadly – the older and younger members of the family. Related to each other clans formed a tribe. The Celts had a custom of placing children in the homes of other members of the tribe for their early training and education.

Farmers worked with farming, combining planting and husbandry. A farmer kept some livestock, which could include cows, sheep, pigs, goats and, possibly, some chickens, while he was also busy with planting wheat, barley, oats, rye and peas.

Women In The Celtic Society

The women in the society of the Celts were respected and independent. They could be wives, priestesses or warriors. In the history of the British Celts, there are mentioned several queens of considerable influence, such as Boudicca and Cartimandua, Roman British Queen of Brigantes Celts.

Among the Celts marriage took on different forms; one of such form was a marriage lasting for a specified period of time; there was also the possibility of divorce, initiated by both the man and the woman.

Religion And Art Of The Celts

Oldest Celtic beliefs were linked to the cult of forces of nature, fertility and the power of the Moon. Widely revered so-called matrons, three female deities presented with attributes symbolizing fertility and abundance. An important figure in the Celtic pantheon was Epona, goddess of fertility and protector of horses, ponies, mules and donkeys.

She is often depicted with one or more horses and Epona is either riding side-saddle on a mare or is between two ponies or horses. Popular within the Celtic world, she was worshiped particularly in the east of Gaul and the Rhineland, but known also across the European continent from Britain to the Balkans.

Other Celtic beliefs developed later, in the Bronze Age, and these were more strongly associated with the cult of the solar system, and the gods, whose cult was associated with such figures as Dagda, Lugh, Cernunnos.

Romanization of Celtic culture and their religion became enriched by other elements such as the cult of the Egyptian goddess Isis. However, in Ireland, where Christianity was adopted rather quickly, the Celtic deities were accepted into the pantheon of Christian saints, and so, for example, became the cult of the Christian Saint Brigid.

Technology, Warfare And Defense Of Celts

Already around 1000 BC, Celts mined tin, copper and rock salt applying it to food preservation; they could also obtain salt from seawater. They had great skills in the area of working with metals; they often used gold and manufactured tools and weapons made of iron and bronze.

Celtic metal shield coverings and chain-link armor were much more superior to those used by other people. The iron horseshoes, spoked wheel, seamless metal wheel rims were the Celts’ most important achievements. Their chariots had greater speed, horses were much safer as the hooves and horseshoes protected them better from injury.

All these skills, as well as knowledge of methods of metal processing and production of weapons, made the Celts superior to other less developed societies. The Celtic warriors were brave, mighty and highly regarded and respected by other armies.

The Expansion Of The Celts

At the end of the Bronze Age, about 1000 BC, the Celts started expansion into western and central Europe and reached the territory of present-day France, Benelux, Switzerland, Italy, the Iberian Peninsula, and the British Isles.

Later, they continued expansion into other regions of Europe.

In the 4th century BC, the Celts entered Rome and soon were driven from there; about 3rd century BC they entered Greece, sacked Delphi in 279 BC and settled in present-day Turkey and there, known as the Galatians, founded the city of Ankara.

The Celts were considered by the ancient Greeks and Romans to be barbarians.

Around the year 284 BC, the Romans entered the territory of the Iberian Peninsula, and began to gain new Celtic settlement over the Atlantic. The situation began to change and was not particularly favorable as before.

In 225 years BC, the Celtic Boii tribe, living in Bologna, clashed with the Roman army at the Battle of Telamon and suffered defeat. The Roman conquest of Gaul began. Celts counting on the support of Hannibal and supported his army, but after he left Italy in the year 203 BC, he had lost an ally, the Romans could easily attack Bologna and win.

The Roman conquest of Gaul proceeded in stages: first, in the 2nd century BC, The Romans captured and colonized South Gaul South (modern-day Provence), and the northern part of Gaul was conquered by Julius Caesar in 58 BC – 50 BC.

The Collapse Of Celtic Civilization

The conquer of Gaul marked the beginning of the end of the Celts’ dominance. Celtic people assimilated the new culture quite easily, though not without initial resistance, as we remember the struggle of Vercingetorix, the famous leader of his brave people.

The Celtic languages ​​were superseded by the universal Latin; the social structure of the Celtic society also changed and the role of the druids significantly decreased.

Green, The Gods of the Celts

Simon James, The World of the Celts