Don Wood – MessageToEagle.com – Science can be fun especially when you discover something new. Inspired by street performers making giant soap bubbles, scientists made an interesting physics’ discovery that revealed secrets of fluid mechanics. This finding can help researchers produce a solution that increases the ability of a thin film to stretch without breaking.

Physicists at Emory University explain these findings could potentially lead to improving processes such as the flow of oils through industrial pipes and the clearance of polluting foams in streams and rivers.

“Fluid dynamics is one of the focuses of Burton’s lab. “The processes of fluid dynamics are visually beautiful and they are everywhere on our planet, from the formation and breakup of droplets and bubbles to the aerodynamics of airplanes and the deep-sea overturning of the world’s oceans,” Justin Burton, associate professor of physics at Emory University said. 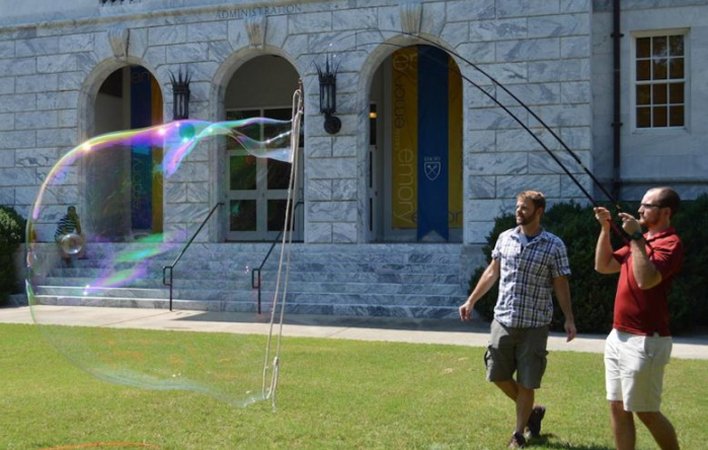 “These bubbles were about the diameter of a hula hoop and as much as a car-length long,” he recalls. “They were also beautiful, with color changes from red to green to bluish tones on their surface.”

This rainbow effect shows that a film’s thickness is comparable to the wavelength of light, or just a few microns, he explains.

Viewing the performance sparked a physics question in Burton’s mind: How could such a microscopically thin film maintain its integrity over such a large distance without breaking up? He began investigating, both in his backyard and in his lab.

As Burton researched bubble recipes he came across the Soap Bubble Wiki, an online, open-source project. The wiki states that it aims to help “bubblers” create “the perfect bubble” by separating fact from folklore regarding soap bubble-making recipes and ingredients.

In addition to water and dishwashing liquid, the Soap Bubble Wiki recipes usually included a polymer — a substance made up of long chains of repeating molecules. The most common polymers in the recipes were natural guar, a powder used as an additive in some foods, or industrial polyethylene glycol (PEO), a lubricant used in some medicines. Guided by the wiki recommendations, Burton conducted laboratory experiments along with two student co-authors who have since graduated: Stephen Frazier, who received a master’s in physics in May and is first author, and undergraduate Xinyi Jiang.

“We basically started making bubbles and popping them, and recorded the speed and dynamics of that process,” Burton says. “Focusing on a fluid at its most violent moments can tell you a lot about its underlying physics.”

Soap films absorb infrared light, so the researchers shone it through the bubbles to measure the thickness of the films. They also measured the molecular weights of the different polymers they used in the bubble recipes. And they let gravity pull droplets of the various soap films off a nozzle, in order to measure how long the resulting thread of liquid could stretch between the nozzle and the droplet before breaking.

The results revealed that polymers were the key ingredient to making colossal bubbles. The long, fibrous strands of polymers enable the bubbles to flow smoothly and stretch further without popping.

“The polymer strands become entangled, something like a hairball, forming longer strands that don’t want to break apart,” Burton explains. “In the right combination, a polymer allows a soap film to reach a ‘sweet spot’ that’s viscous but also stretchy — just not so stretchy that it rips apart.”

The work confirms what many expert “bubblers” already had figured out — a good giant soap bubble recipe should include a polymer.

“We did the physics to explain why and how polymers can make a fluid film stretch as far as 100 square meters without breaking,” Burton says.

The physicists also found that varying the molecular sizes of the polymers helps strengthen soap film. That discovery happened by accident.

The researchers worked on the project for more than a year and stored some containers of PEO they had purchased. They realized that PEO from containers that had aged about six months produced stronger soap bubble films compared to PEO from containers used when it was first purchased. Upon investigation, they realized that the polymers in the aged PEO had degraded over time, varying the length of the molecular strands.

Understanding how fluids and thin films response to stress, Burton says, could lead to an array of applications, such as improving the flow of industrial materials through pipes, or the clean-up of toxic foams.

“As with all fundamental research, you have to follow your instincts and heart,” Burton says of his soap bubble odyssey. “Sometimes your bubble gets burst, but in this case, we discovered something interesting.”

Burton recommends the following recipe for blowing giant soap bubbles. He cautions, however, that factors that cannot be controlled outside of a laboratory, such as humidity levels, may alter the results.

2-3 grams of guar powder, sold in many grocery stores (about ½ heaping teaspoon)

50 milliliters of rubbing alcohol (a little over 3 tablespoons)

2 grams of baking powder (about ½ teaspoon)

Mix the guar powder with the alcohol and stir until there are no clumps. Combine the alcohol/guar slurry with the water and mix gently for 10 minutes. Let it sit for a bit so the guar hydrates. Then mix again. Add the baking powder and stir. Add the detergent, and stir gently to avoid foaming.

Dip a giant bubble wand with a fibrous string into the mixture until it is fully immersed. Slowly remove the string and wave the wand gently or blow on the soap film. Enjoy the physics of giant soap bubbles!