Eddie Gonzales Jr. – MessageToEagle.com – Called KELT-9b, the planet is an ultra-hot Jupiter, one of several varieties of exoplanets — planets around other stars — found in our galaxy. It weighs in at nearly three times the mass of our own Jupiter and orbits a star some 670 light-years away.

It has a surface temperature of 7,800 degrees Fahrenheit (4,300 degrees Celsius) — hotter than some stars — this planet is the hottest found so far. 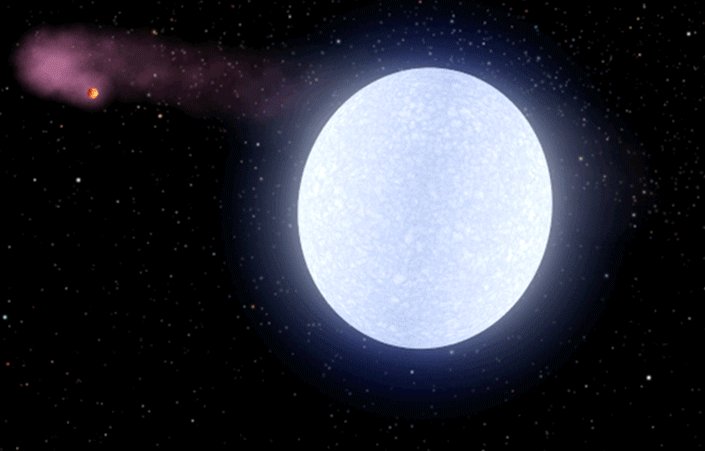 Artist’s rendering of a “hot Jupiter” called KELT-9b, the hottest known exoplanet – so hot, a new paper finds, that even molecules in its atmosphere are torn to shreds. Credit: NASA/JPL-Caltech

Astronomers have found that the heat is too much even for molecules to remain intact. Molecules of hydrogen gas are likely ripped apart on the dayside of KELT-9b, unable to re-form until their disjointed atoms flow around to the planet’s nightside.

Though still extremely hot, the nightside’s slight cooling is enough to allow hydrogen gas molecules to reform — that is, until they flow back to the dayside, where they’re torn apart all over again.

“This kind of planet is so extreme in temperature, it is a bit separate from a lot of other exoplanets,” Megan Mansfield, a graduate student at the University of Chicago and lead author of a new paper revealing these findings, said in a press release. “There are some other hot Jupiters and ultra-hot Jupiters that are not quite as hot but still warm enough that this effect should be taking place.”

KELT-9b will stay firmly categorized among the uninhabitable worlds. Astronomers became aware of its extremely hostile environment in 2017 when it was first detected using the Kilodegree Extremely Little Telescope (KELT) system — a combined effort involving observations from two robotic telescopes, one in southern Arizona and one in South Africa.

The team used the Spitzer space telescope to parse temperature profiles from this infernal giant. The team caught a glimpse of the difference between KELT-9b’s dayside and its “night.” In this case, the planet orbits its star so tightly that a “year” — once around the star — takes only 1 1/2 days. That means the planet is tidally locked, presenting one face to its star for all time (as our Moon presents only one face to Earth). On the far side of KELT-9b, nighttime lasts forever.

But gases and heat flow from one side to the other. A big question for researchers trying to understand exoplanet atmospheres is how radiation and flow balance each other out.

KELT-9b turns out not to have huge temperature differences between its day- and nightsides, suggesting heat flow from one to the other. And the “hot spot” on the dayside, which is supposed to be directly under this planet’s star, was shifted away from its expected position. Scientists don’t know why — yet another mystery to be solved on this strange, hot planet.