In those ancient times, the dead were buried on a location with a view – their ancestors were given something beautiful to enjoy from their graves. This Southern hillside sloping down towards Limfjorden is no exception.
The oldest graves from the Iron Age around 400 AD are near the top of the hill, and the further down the younger the graves till the youngest ones from around 1000 AD furthest down. Ity means that the graves were  arranged chronologically –

The graves are shaped differently depending on whether it contains a man or a woman. The graves containing men are shaped pointy like viking ships or as a triangle, while women’s graves are round or oval.

Depending on the burial customs of the time of each burial, the Iron Age grave was covered with a mound, and the Viking Age grave was a cremation grave with a stone surrounded perimeter, inside which the deceased was cremated.

This is a typical man’s ship shaped cremation grave, where a man was put on top of a fire within the stone circumference and cremated. It was thought that cremation set free the spirit of the man from his body – the cremation started his voyage to join the gods. People were buried with effects that was thought to be put to good use in the spirit world, and the fire didn’t help conserve them too well till today, but the oriental coins and accessories excavated show that the vikings had widespread trade connections.

Throughout the time Lindholm Høje was in use, a village was located close to the burial site. The concrete outline shows the outline of a hut which was built next to the graves. The sand that constantly blew in over and covered different parts of the hillside also forced the village, which was probably called Vendel, to move around in the area to avoid it. 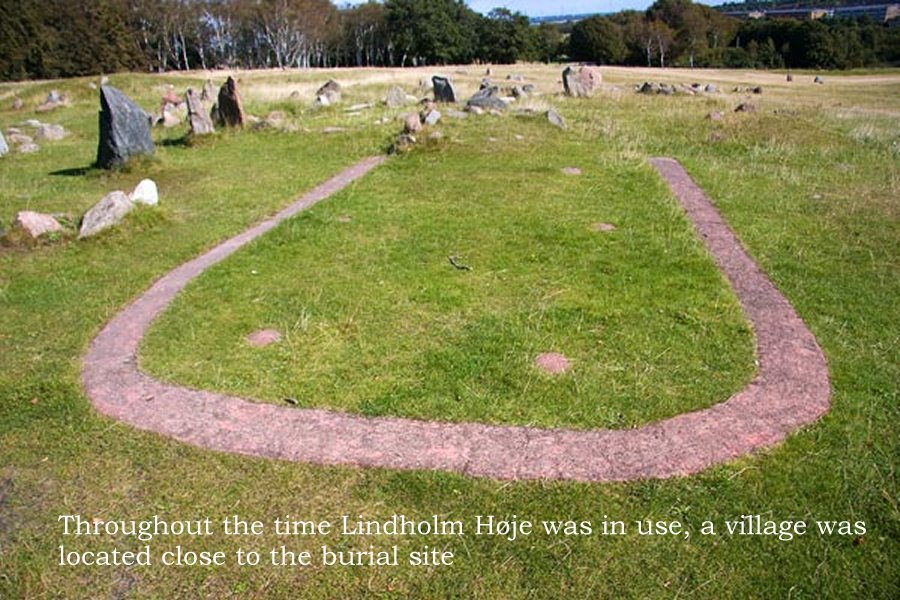 Excavations show that the village has been moved from top of the hill to the bottom of the hill, and up North of the hill entirely in the period between 700 AD and 1100 AD.

The Lindholm Høje museum Northwest of the burial site was built and given to the City of Aalborg presents information about the burial site related to the Iron and Viking Ages.