Discovered in 2012, the “White City” or a “Lost City of the Monkey God”, holds the remains of what would be a previously unknown pre-Columbian civilization.

Now, archaeologists from the Honduran Institute of Anthropology and History, or IHAH, National Geographic and the University of Colorado, have extracted the first two pieces from La Ciudad Blanca (The White City), namely, a vessel decorated with a vulture’s head and a jar with the heads of a jaguar and a man, informed Honduran President Juan Orlando Hernandez,’ reports Latin American Herald Tribune.

The artifacts, a vessel decorated with a vulture’s head and a jar with the heads of a jaguar and a man, were presented Tuesday by Honduran President Juan Orlando Hernandez, who was accompanied by archaeologists from the Honduran Institute of Anthropology and History, or IHAH, National Geographic and the University of Colorado who extracted the pieces from T1 – dubbed “Jaguar City”.

“God has blessed us to live in this moment so special in the history of Honduras and for many lovers of archaeology,” Hernandez said.

Ciudad Jaguar “is a metropolitan region where a number of small towns have been found,” Hernandez said, asking Hondurans to understand that the discovery and exploration of the site represent “a national commitment and project” to protect the treasures for the entire world.

Finding remains of a previously unknown culture “generates great expectation for Honduras and for the world,” the president said.

The archaeological team, led by Christopher Fisher of Colorado State University and supported by the Honduran government and a grant from the National Geographic Society, will spend a month recovering the artifacts. Fisher said the vessel with the vulture head found in Ciudad Jaguar dates between 1000 and 1500, a statement from the presidential office said.

IHAH director Virgilio Parades said that White City could be four times the size of the Copan archaeological park, a World Heritage Site hosting the most spectacular set of Maya sculptures in western Honduras, writes National Geographic in its article.

“We’re hoping to find out what culture was here,” added Paredes. 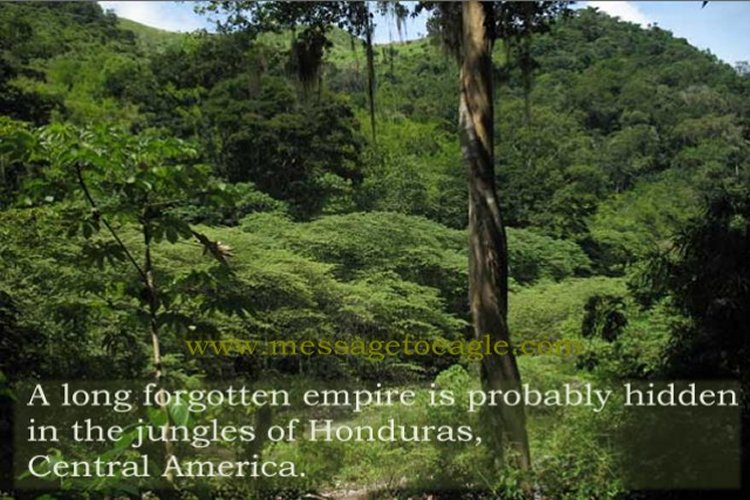 National Geographic reports that the vessel is a spectacular specimen carved in basalt. The rim of the jar depicts two animal figures, one of which might possibly represent the head of a vulture, common to that area. The vessel is one of fifty-two stone sculptures, discovered on the February expedition, which had been deposited at the base of an earthen pyramid in the central part of the city about five to eight hundred years ago, and apparently left untouched ever since.

Only the very tops of the sculptures could be seen protruding from the ground.

In just the first few days of excavation this month, the team, led by archaeologist Chris Fisher of Colorado State University in Fort Collins, has found a dozen more objects, bringing the total to sixty-four. The artifacts are mostly stone jars and “metates,” which are presumed to be thrones or seats of power.

Many of the objects are elaborately decorated with animal heads and geometric patterns. One of the metates is incised with a series of designs that archaeologists say seem to resemble those found in a Maya “sky band,” an abstract depiction of the night sky.

The site visited by the initial expedition last March is just one of three in the region revealed by an aerial survey in 2012 using an imaging technique called lidar.