MessageToEagle.com – An untouched by looters through several millennia, a remarkable, intact tomb was discovered by Leonard Woolley during his excavations at the “Royal Cemetery of Ur” between 1922 and 1934.

It was tomb of a mysterious lady named”Puabi” by researchers, who found her name and title on one of three cylinder seals.

She could have been a high priestess or wife of the king, but it is rather doubtful because in early Mesopotamia, women, even elite women, were usually described in relation to their husbands. The mysterious “Puabi” was identified without the mention of her husband and became only known as “Queen Puabi”.

The two cuneiform signs that compose her name were initially read as “Shub-ad” in Sumerian,; today, researchers rather prefer to read this word in Akkadian as “Pu-abi” (or, more correctly, “Pu-abum,” meaning “word of the Father”).

Her title is “eresh” (sometimes mistakenly read as “nin”), and means “queen.” 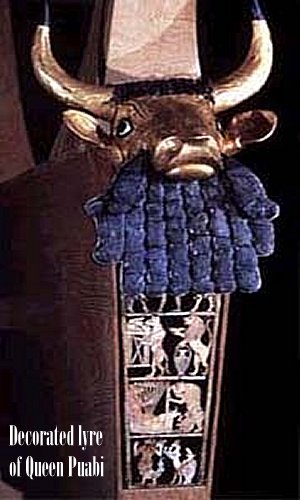 The woman’s final resting place was unique due to the large amount of rich and well-preserved artifacts that were found with her ashes protected by a wooden (rather badly preserved) coffin.

Puabi’s hands were holding a golden cup and her head was decorated with exquisite jewelry. The skeleton in the grave chamber of Puabi lay on a stretcher with his head to the west.

The examination of the skeleton Puabi showed that she was about 40 years old and five feet tall. She wore a golden headdress.

Her wig was wrapped a length of 8 m long girdle, adorned with golden leaves, flowers, rings, and plates. At the top of the decoration was a high crest of gold, with three rosettes. The woman had crescent-shaped earrings.

Her upper body was covered in strings of beads made of precious metals and semi-precious stones stretching from her shoulders to her belt, while rings decorated all her fingers.

The Puabi’s tomb contained the golden and lapis-lazuli encrusted bearded bulls head; a wealth of gold tableware; lapis lazuli cylindrical beads for extravagant necklaces and belts; a chariot adorned with lioness’ heads in silver, and many silver, lapis lazuli, and golden rings and bracelets.

Puabi was buried with 52 attendants, of which two persons were buried in the chamber with her; one crouched at her head, the other at her feet.

All attendants left this world to accompany the deceased to serve her in the Afterlife. Leonard Woolley suspected that these people either  poisoned themselves or had been poisoned by others.

Recent evidence derived from CAT scans through the University of Pennsylvania Museum suggests that some of the sacrifices were likely violent and caused by blunt force trauma.

Helmet Of Meskalamdug – Sumerian King Of The First Dynasty Of Ur

Walls Of Uruk Built By Sumerian King Gilgamesh 4,500 Years Ago

The grave also contained a threshing sledge chamber and much pottery.

In a pit associated with Queen Puabi’s chamber were five armed men, a wooden sled drawn by a pair of oxen, four grooms for the oxen, and a wood chest or wardrobe which probably contained decomposed textiles..

Three more attendants crouched near the wardrobe, surrounded by metal, stone, and clay vessels. At the opposite end of the pit were twelve female attendants, all wearing headdresses very similar to that of Puabi, though rather less decorative.

L. Zettler, L. Horne, Treasures from the Royal Tombs of Ur