Eddie Gonzales Jr. – MessageToEagle.com – Researchers from the Instituto de Astrofísica de Canarias (IAC) have solved one of the mysteries of 2018 in the field of extragalactic astrophysics: the supposed existence of a galaxy without dark matter. 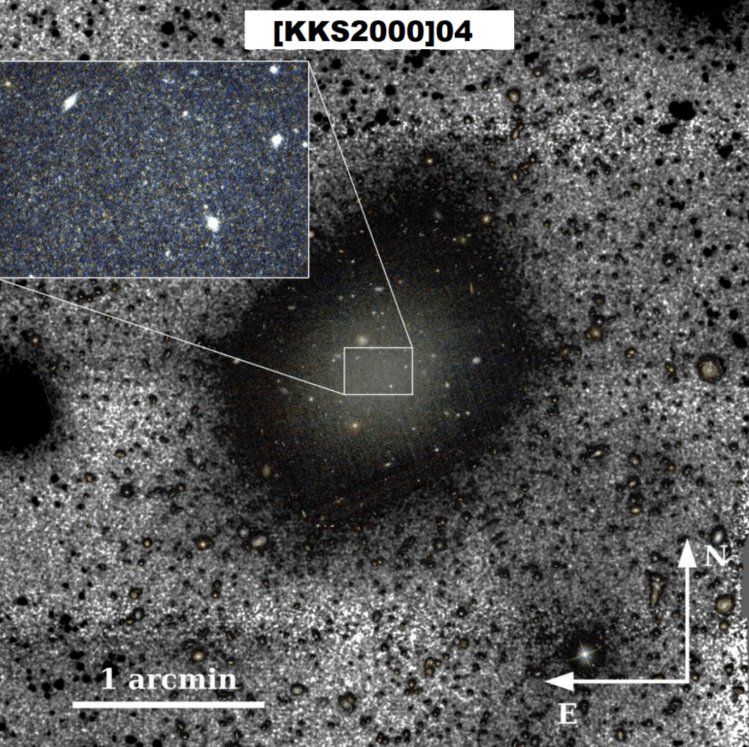 The ultra-diffuse galaxy KKS2000]04 (NGC1052-DF2), towards the constellation of Cetus, considered previously a galaxy with no dark matter. Credit: Trujillo et al.

Galaxies with no dark matter are impossible to understand in the framework of the current theory of galaxy formation, because the role of dark matter is fundamental in causing the collapse of the gas to form stars. In 2018, a study published in Nature magazine announced the discovery of a galaxy that lacked dark matter, which made a strong impact, and occupied the covers of popular scientific magazines.

Now, a group of researchers at the Instituto de Astrofísica de Canarias (IAC) has solved this mystery via a very complete set of observations of KKS2000]04 (NGC1052-DF2), previously nicknamed “the galaxy without dark matter”. The galaxy is located 64 million light years from the Earth and revealed that the real distance is much less, around 42 million light years.

The researchers, perplexed because all the parameters that depended on the distance of the galaxy were anomalous; have revised the available distance indicators. Using five independent methods to estimate the distance of the object they found that all of them coincided in one conclusion: the galaxy is much nearer than the value presented in the previous research.

Thanks to these new results, the parameters of the galaxy inferred from its distance have become “normal” and fit the observed trends traced by galaxies with similar characteristics.

The most relevant datum that has been found via the new distance analysis is that the total mass of this galaxy is around a half of the mass estimated previously, but the mass of its stars is only about quarter of the previously estimated mass.  This implies that a significant part of the total mass must be made up of dark matter.

The results of this work show the fundamental importance of the correct measurement of extragalactic distances. It has always been one of the most challenging tasks in astrophysics: how to measure the distances to objects which are very far away and which we cannot touch.