Eddie Gonzales Jr. – MessageToEagle.com – Data from NASA’s New Horizons mission are providing new insights into how planets and planetesimals – the building blocks of the planets – were formed.

The New Horizons spacecraft flew past the ancient Kuiper Belt object Arrokoth (2014 MU69) on Jan. 1, 2019, providing humankind’s first close-up look at one of the icy remnants of solar system formation in the vast region beyond the orbit of Neptune. 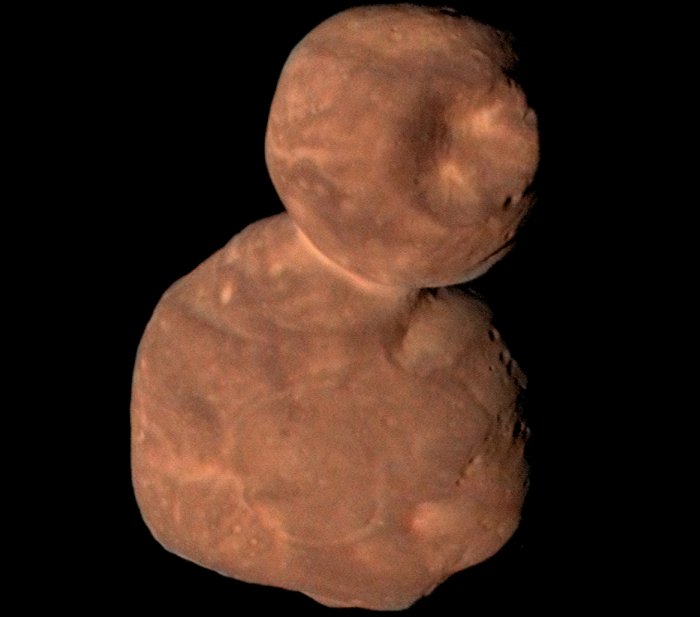 The uniform color and composition of Arrokoth’s surface shows the Kuiper Belt object formed from a small, uniform, cloud of material in the solar nebula, rather than a mishmash of matter from more separated parts of the nebula. The former supports the idea that Arrokoth formed in a local collapse of a cloud in the solar nebula. Credits: NASA/Johns Hopkins University Applied PhysicsLaboratory/Southwest Research Institute/Roman Tkachenko

Using detailed data on the object’s shape, geology, color and composition – gathered during a record-setting flyby that occurred more than four billion miles from Earth – researchers have apparently answered a longstanding question about planetesimal origins, and therefore made a major advance in understanding how the planets themselves formed.

“Arrokoth is the most distant, most primitive and most pristine object ever explored by spacecraft, so we knew it would have a unique story to tell,” New Horizons Principal Investigator Alan Stern, of the Southwest Research Institute in Boulder, Colorado said in a press release.

“It’s teaching us how planetesimals formed, and we believe the result marks a significant advance in understanding overall planetesimal and planet formation.”

The first post-flyby images transmitted from New Horizons last year showed that Arrokoth had two connected lobes, a smooth surface and a uniform composition, indicating it was likely pristine and would provide decisive information on how bodies like it formed. These first results were published in Science last May.

Scientists have used all available New Horizons images of Arrokoth, taken from many angles, to determine its 3D shape, as shown in this animation. The shape provides additional insight into Arrokoth’s origins. The flattened shapes of each of Arrokoth’s lobes, as well as the remarkably close alignment of their poles and equators, point to an orderly, gentle merger of two objects formed from the same collapsing cloud of particles. Arrokoth has the physical features of a body that came together slowly, with ‘locally-sourced’ materials from a small part of the solar nebula. An object like Arrokoth wouldn’t have formed, or look the way it does, in a more chaotic accretion environment.
Credits: NASA/Johns Hopkins University Applied Physics Laboratory/Southwest Research Institute/James Tuttle Keane

“This is truly an exciting find for what is already a very successful and history-making mission” said Lori Glaze, director of NASA’s Planetary Science Division. “The continued discoveries of NASA’s New Horizons spacecraft astound as it reshapes our knowledge and understanding of how planetary bodies form in solar systems across the universe.”

Over the following months, working with more and higher-resolution data as well as sophisticated computer simulations, the mission team assembled a picture of how Arrokoth must have formed. Their analysis indicates that the lobes of this “contact binary” object were once separate bodies that formed close together and at low velocity, orbited each other, and then gently merged to create the 22-mile long object New Horizons observed.

This indicates Arrokoth formed during the gravity-driven collapse of a cloud of solid particles in the primordial solar nebula, rather than by the competing theory of planetesimal formation called hierarchical accretion. Unlike the high-speed collisions between planetesimals in hierarchical accretion, in particle-cloud collapse, particles merge gently, slowly growing larger.

“Just as fossils tell us how species evolved on Earth, planetesimals tell us how planets formed in space,” said William McKinnon, a New Horizons co-investigator from Washington University in St. Louis, and lead author of an Arrokoth formation paper in Science this week. “Arrokoth looks the way it does not because it formed through violent collisions, but in more of an intricate dance, in which its component objects slowly orbited each other before coming together.”

Two other important pieces of evidence support this conclusion. The uniform color and composition of Arrokoth’s surface shows the KBO formed from nearby material, as local cloud collapse models predict, rather than a mishmash of matter from more separated parts of the nebula, as hierarchical models might predict.

The flattened shapes of each of Arrokoth’s lobes, as well as the remarkably close alignment of their poles and equators, also point to a more orderly merger from a collapsing cloud. Further still, Arrokoth’s smooth, lightly cratered surface indicates its face has remained well preserved since the end of the planet formation era.

“Arrokoth has the physical features of a body that came together slowly, with ‘local’ materials in the solar nebula,” said Will Grundy, New Horizons composition theme team lead from Lowell Observatory in Flagstaff, Arizona, and the lead author of a second Science paper. “An object like Arrokoth wouldn’t have formed, or look the way it does, in a more chaotic accretion environment.”

The latest Arrokoth reports significantly expand on the May 2019 Science paper, led by Stern. The three new papers are based on 10 times as much data as the first report, and together provide a far more complete picture of Arrokoth’s origin.

“All of the evidence we’ve found points to particle-cloud collapse models, and all but rule out hierarchical accretion for the formation mode of Arrokoth, and by inference, other planetesimals,” Stern said.