MessageToEagle.com – There is archaeological evidence of modern humans in the Americas by approx. 15 thousand years ago.

At the same time, there is still debate over exactly when and how many times the ancestors of present-day Native Americans entered the New World from Siberia.

A large genome-scale study conducted by an international team of scientists led by the Centre for GeoGenetics at the University of Copenhagen provides some very important answers. 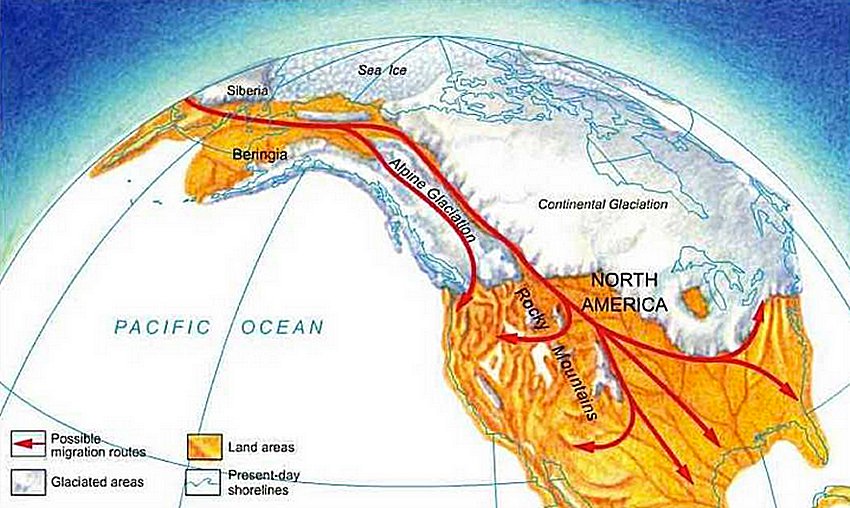 “Our study presents the most comprehensive picture of the genetic prehistory of the Americas to date. We show that all Native Americans, including the major sub-groups of Amerindians and Athabascans, descend from the same migration wave into the Americas.
This was distinct from later waves that gave rise to the Paleo-Eskimo and Inuit populations in the New World Arctic region,” says Dr. Maanasa Raghavan, a postdoctoral researcher at the Centre for GeoGenetics and one of the lead authors of the study.

The study also reveals that the ancestors of all present-day Native Americans arrived in the Americas as part of a single migration wave, no earlier than 23,000 years ago.

Within the Americas, a genetic split occurs between southern and northern branches of Native Americans around 13,000 years ago, researchers say.
A later gene flow into some Native Americans from groups related to present-day East Asians and Australo-Melanesians is also reported by the team.
The result of the study also show that ancestral Native Americans may then have been isolated in Beringia for about 8,000 years, given that the oldest archaeological evidence for humans in the Americas is around 15,000 years old.

However, debate over the demographic processes that led to the populating of the Americas still persists and there are many questions that must be answered.

Did they split from their Old World ancestors and immediately cross into the Americas or was there, as one genetic model suggests, an ‘incubation’ period in Beringia, the now-inundated land bridge that connected north-eastern Siberia to Alaska?

And if they came in a single wave, when did the ancestral Native American population split into the genetic branches seen today among their descendants?

The results have just been published online in the leading scientific journal Science.
MessageToEagle.com