MessageToEagle.com – A group of European astronomers has discovered an ancient planetary system that is likely to be a survivor from one of the earliest cosmic eras, 13 billion years ago.

The system consists of the star HIP 11952 and two planets, which have orbital periods of 290 and 7 days, respectively.

Whereas planets usually form within clouds that include heavier chemical elements, the star HIP 11952 contains very little other than hydrogen and helium.

The system promises to shed light on planet formation in the early universe – under conditions quite different from those of later planetary systems, such as our own.

It is widely accepted that planets are formed in disks of gas and dust that swirl around young stars.

But look into the details, and many open questions remain – including the question of what it actually takes to make a planet.

With a sample of, by now, more than 750 confirmed planets orbiting stars other than the Sun, astronomers have some idea of the diversity among planetary systems.

But also, certain trends have emerged: Statistically, a star that contains more “metals” – in astronomical parlance, the term includes all chemical elements other than hydrogen and helium – is more likely to have planets.

This suggests a key question: Originally, the universe contained almost no chemical elements other than hydrogen and helium. Almost all heavier elements have been produced, over time inside stars, and then flung into space as massive stars end their lives in giant explosions (supernovae). So what about planet formation under conditions like those of the very early universe, say: 13 billion years ago? If metal-rich stars are more likely to form planets, are there, conversely, stars with a metal content so low that they cannot form planets at all? And if the answer is yes, then when, throughout cosmic history, should we expect the very first planets to form? 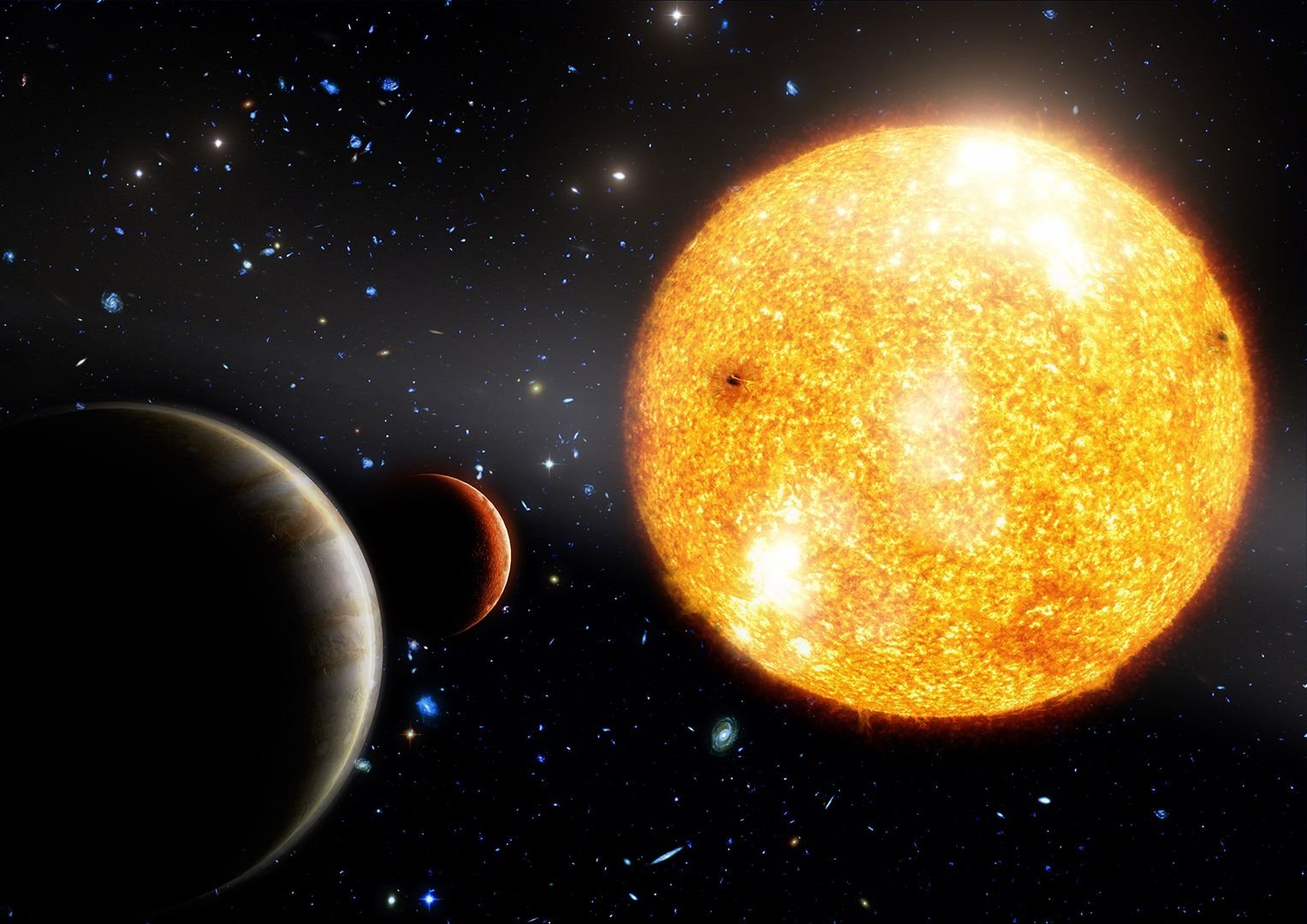 Now a group of astronomers, including researchers from the Max-Planck-Institute for Astronomy in Heidelberg, Germany, has discovered a planetary system that could help provide answers to those questions. As part of a survey targeting especially metal-poor stars, they identified two giant planets around a star known by its catalogue number as HIP 11952, a star in the constellation Cetus (“the whale” or “the sea monster”) at a distance of about 375 light-years from Earth. By themselves, these planets, HIP 11952b and HIP 11952c, are not unusual. What is unusual is the fact that they orbit such an extremely metal-poor and, in particular, such a very old star!

For classical models of planet formation, which favor metal-rich stars when it comes to forming planets, planets around such a star should be extremely rare. Veronica Roccatagliata (University Observatory Munich), the principal investigator of the planet survey around metal-poor stars that led to the discovery, explains: “In 2010 we found the first example of such a metal-poor system, HIP 13044. Back then, we thought it might be a unique case; now, it seems as if there might be more planets around metal-poor stars than expected.”

HIP 13044 became famous as the “exoplanet from another galaxy” – the star is very likely part of a so-called stellar stream, the remnant of another galaxy swallowed by our own billions of years ago.

Compared to other exoplanetary systems, HIP 11952 is not only one that is extremely metal-poor, but, at an estimated age of 12.8 billion years, also one of the oldest systems known so far. “This is an archaeological find in our own backyard,” adds Johny Setiawan of the Max Planck Institute for Astronomy, who led the study of HIP 11952: “These planets probably formed when our Galaxy itself was still a baby.”

“We would like to discover and study more planetary systems of this kind. That would allow us to refine our theories of planet formation. The discovery of the planets of HIP 11952 shows that planets have been forming throughout the life of our Universe”, adds Anna Pasquali from the Center for Astronomy at Heidelberg University (ZAH), a co-author of the paper.