Don Wood – MessageToEagle.com – If you could travel back in time and see what Sahara looked like about 100 million years ago, you could easily understand why this was the most dangerous place in the history of Earth.

The region was occupied by ferocious predators, including flying reptiles and crocodile-like hunters.

In those days Sahara was not a desert. We don’t know what really turned the green Sahara into a desert, but the area was home to a vast river system, filled with many different species of aquatic and terrestrial animals. It must have been an amazing sight to see Pterosaurs, flying reptiles of the Cretaceous period, soaring above a world dominated by predators. 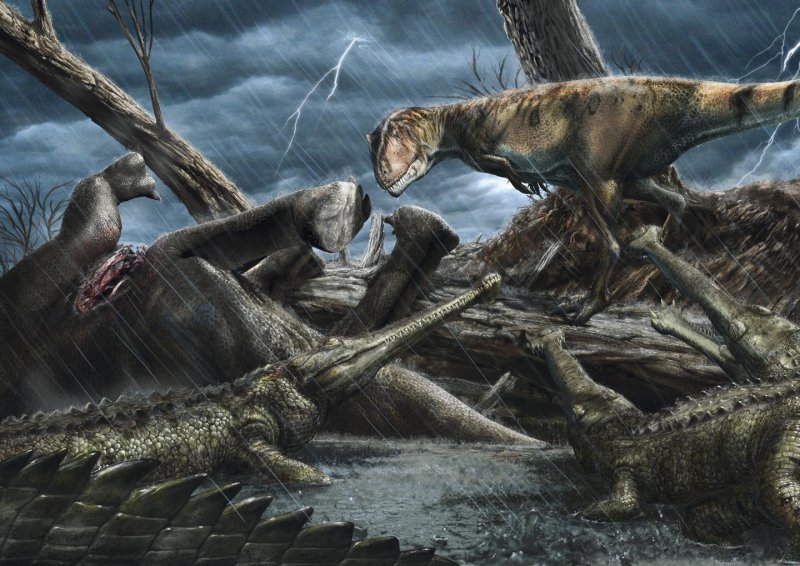 “This was arguably the most dangerous place in the history of planet Earth, a place where a human time-traveler would not last very long,” Dr. Nizar Ibrahim, an Assistant Professor of Biology at the University of Detroit Mercy and Visiting Researcher from the University of Portsmouth said.

Excavations from the area of Cretaceous rock formations in south-eastern Morocco, known as the Kem Kem Group resulted in the discovery of many fossils, including three of the largest predatory dinosaurs ever known, including the sabre-toothed Carcharodontosaurus (over 8m in length with enormous jaws and long, serrated teeth up to eight inches long) and Deltadromeus (around 8m in length, a member of the raptor family with long, unusually slender hind limbs for its size), as well as several predatory flying reptiles (pterosaurs) and crocodile-like hunters.

“This place was filled with absolutely enormous fish, including giant coelacanths and lungfish. The coelacanth, for example, is probably four or even five times large than today’s coelacanth. There is an enormous freshwater saw shark called Onchopristis with the most fearsome of rostral teeth, they are like barbed daggers, but beautifully shiny, ” Professor David Martill from the University of Portsmouth explained.

Shedding light on Africa’s ancient past is important says Professor Martill, “This is the most comprehensive piece of work on fossil vertebrates from the Sahara in almost a century, since the famous German palaeontologist Ernst Freiherr Stromer von Reichenbach published his last major work in 1936.”

Discovered – Large Mysterious Structure Hidden Under The Sand In The Sahara Desert – A New Pyramid Or Something Else?

Adding to this we feel it’s also wise to explore the secrets of Sahar to learn more about ancient civilizations. As we previously mentioned, researchers traveled to Takarkori rock shelter in southwestern Libya where they uncovered ancient animal remains that show climate was much different here thousands of years ago.

Among many things, they discovered fish fossils in the Sahara Desert. Those who search for evidence of a long-lost ancient civilization have discovered mysterious ancient structures hidden under the sand in the Sahara Desert. If the existence of these ancient buildings could be confirmed it would be a great archaeological and historical breakthrough.