MessageToEagle.com – Scientists at the University of Goettingen and the Carnegie Institution for Science in the U.S. Washington have discovered a potentially habitable planet, located 22 light years away from Earth.
The super-Earth, named GJ 667Cc has the mass four and a half times that of our Earth and an orbit of 28.15 days.

Star system, 22 light-years away from Earth, with two dwarf stars of class K (left) and a dwarf star of the class M (middle). Right on the edge of the picture now discovered super-Earth GJ667Cc that circles the dwarf star center. (Image credit: MessageToEagle.com)

The planet GJ 667Cc orbits a dwarf star of the class M, 22 light years away which corresponds to approximately 209 trillion kilometers.

“These super-earth are good choice for the existence of liquid water and life, as it also occurs on Earth, “says one of the lead investigator, Dr. Guillem Anglada-Escudé from the University of Goettingen, Germany.

The super-Earth receives from the dwarf stars they orbit, about one-tenth less light than our earth from the sun.

Since a large part of this light is in the infrared range, the planet can accommodate about as much energy as our earth.

The dwarf star has, in contrast to our sun barely metallic elements.

Star system, 22 light-years away from Earth, with two dwarf stars of class K (left) and a dwarf star of the class M (middle). Right on the edge of the picture now discovered super-Earth GJ667Cc that circles the dwarf star center. (Image credit: MessageToEagle.com)

“With a new generation of measuring instruments such scientists could dwarf stars systematically investigate similar research on this planet now and again targeted for spectroscopic signs of life.” 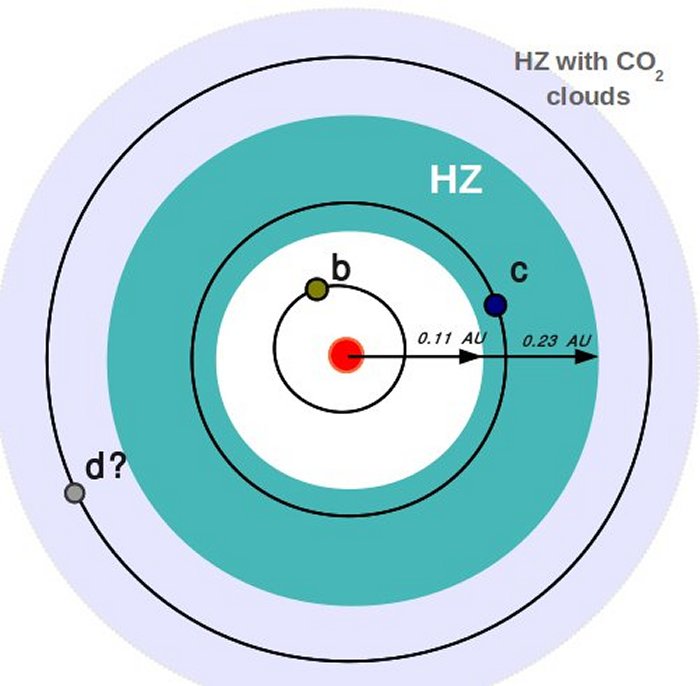 The researchers found the new super-Earth, as they wanted to explore a different super-Earth in the same star system. In their study, they analyzed data using a new method of the European Southern Observatory (ESO) and the Magellan II telescope in Chile and the Keck Observatory in Hawaii. In future studies, the scientists want to find out whether there are in the star system a so-called gas giant and another super-Earth.
The scientists have published their research results on the Internet at arxiv.org. These discoveries will soon appear in the journal The Astrophysical Journal Letters.
Original publication: Guillem Anglada-Escudé et al. A planetary system around the nearby M dwarf GJ 667C with at least one super-Earth in its habitable zone. The Astrophysical Journal Letters 2012 th