Cynthia McKanzie – MessageToEagle.com – Physicist Paul Davies has gained popularity not only for being an excellent scientist but also for his ability to explain the significance of advanced scientific ideas in simple language. He is the author of twenty books that deal with some of the greatest mysteries encountered in cosmology and physics.

Paul Davies’ newest book, The Demon in the Machine, takes aim at one of the great outstanding scientific enigmas—what is life, how and why does it emerge and what distinguishes the living from the non-living?

The Demon in the Machine was published last October in United States and has now been named the top physics book of 2019 by Physics World, a publication of the UK Institute of Physics.

In The Demon in the Machine: How Hidden Webs of Information are Solving the Mystery of Life, Davies picks up the challenge where the great quantum physicist Erwin Schrödinger left off 75 years ago. Schrödinger’s 1944 book What is Life? inspired two generations of scientists, Davies included. 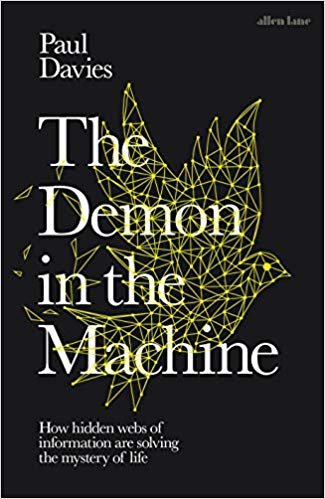 How does life create order from chaos? And just what is life, anyway? Leading physicist Paul Davies argues that to find the answers, we must first answer a deeper question: ‘What is information?’ To understand the origins and nature of life, Davies proposes a radical vision of biology which sees the underpinnings of life as similar to circuits and electronics, arguing that life as we know it should really be considered a phenomenon of information storage.

In an extraordinary deep dive into the real mechanics of what we take for granted, Davies reveals how biological processes, from photosynthesis to birds’ navigation abilities, rely on quantum mechanics, and explores whether quantum physics could prove to be the secret key of all life on Earth.

Lively and accessible, Demons in the Machine boils down intricate interdisciplinary developments to take readers on an eye-opening journey towards the ultimate goal of science: unifying all theories of the living and the non-living, so that humanity can at last understand its place in the universe. Read more

In spite of decades of progress in biology, there is still no agreement on what makes life tick or how it originated. To a physicist, life seems like magic matter. But now, explains Davies, we can at last glimpse where the answer lies, and it comes right out of left field—from the realm of information theory.

“What is it that gives life its distinctive oomph?” Davies asks. “How can a bunch of stupid atoms combine to form something so exquisitely clever?” That is where information comes in.

To Davies, living things are complex networks of informed chemistry, with organized information being the key to explaining life’s distinctive properties. Our genetic material, DNA and RNA, is but one well-known example of this information, being the instruction manual for life. But coded information surges through living things at all levels, from genes to cells to brains to ecosystems, even extending to a planetary scale.

The challenge for scientists is to understand how ‘information,’ an abstract concept stemming from the realm of human discourse, can affect material objects.

However, as Davies explains, a deep link between information and physics was discovered in the middle of the nineteenth century with a thought experiment by James Clerk Maxwell. Maxwell envisaged a tiny being—a demon—that could use information about molecules to perform mechanical work; that is, to use information as a fuel.

Mystery Of Our Coded DNA – Who Was The ‘Programmer’?

Today, real Maxwell demons are being made by nanotechnologists, proving that information can indeed serve as a fuel—it is a physical quantity. But living organisms are replete with molecular machines that are, in effect, Maxwell demons, thus opening the way for an explanation of life’s remarkable abilities.

“Information pervades biology,” Davies says. “But to fully explain life, do we need a new law, one that couples information and matter at all levels of complexity?

Schrödinger was prepared for it, and after many years of research I have come to agree. Biology demands a totally new kind of physical law, built on the theory of information.”

“It is a challenging, but ultimately extremely captivating, fruitful and enjoyable read,” said Tushna Commissariat, the Reviews and Careers Editor at Physics World.

“You might think a topic like the emergence of life would be quite overwhelming. But Professor Davies’ aim is to lay out a basic explanation of how matter (living and otherwise), information and entropy interact. For a topic like this, he is the ultimate guide.”