A.Sutherland  – MessageToEagle.com – This was one of the first admitted entity sightings and probably also one of the earliest close encounters of the third kind investigated officially at the time it took place.

The incident occurred just northeast of Frontenac and about seven miles northeast of Pittsburg, Kansas, on August 25, 1952. 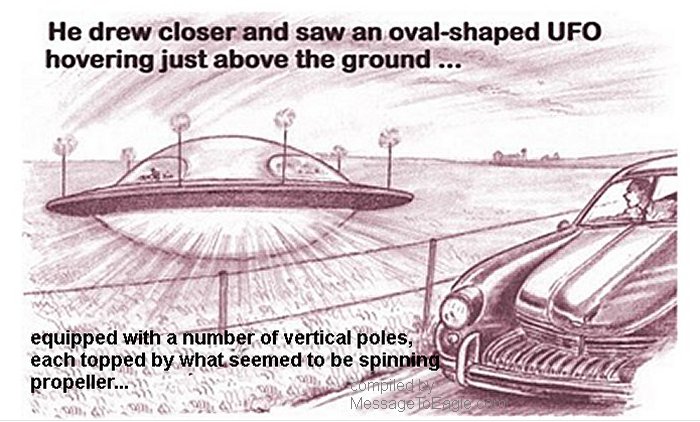 At 5.30 am, William Squyres, a KOAM radio entertainer in Pittsburg was driving through farmland along Highway 60. He was on his way into town to work early this morning.

As he drove through a heavily wooded area, suddenly something shiny and odd caught his attention, in a pasture field usually occupied by a large herd of cattle.
Squyres drew closer and saw an oval-shaped object hovering with a rocking motion, just above the ground. He saw the waving grass and vegetation affected by the down blast of the UFO’s hovering system.

The object was silver-grey in color, approximately 21m (70 ft) across and 3.7m (12 ft) high.
Based on the witness’s more detailed description, the UFO was rather like two soup bowls placed rim to rim and then flattened somewhat.

William Squyres drove up until his car was alongside the field and only about 90m (300ft) from the UFO. He then stopped the car and began to study the object more closely. The witness could clearly distinguish the underside of the object and its faint bluish glow.

The unidentified flying object “parked” in the field approximately 100 yards off the road.

The object’s rim that could also be a walkway was especially interesting. From this rose a number of vertical poles, each topped by what seemed to be a series of 6-7-inch spinning propeller revolving at high speed.
At one end of the UFO, there were slightly opaque window-like openings through which Squyres could observe indistinct objects moving all the time.
According to Squyres, the activity behind these windows was rather obscured “like a window shade pulled down, I could see figures behind it…” 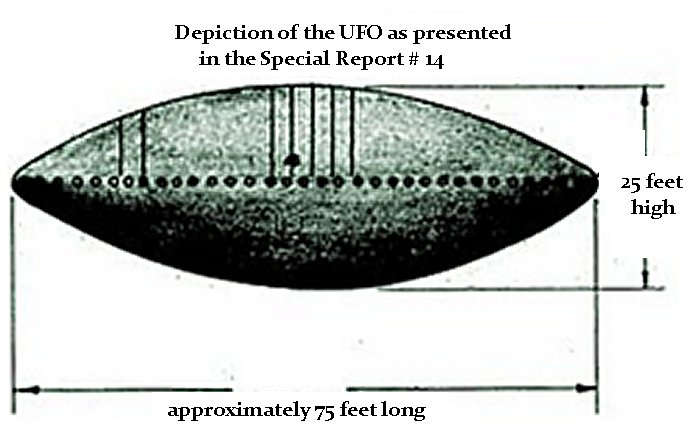 At the other end, the unknown vehicle was equipped with another, a rectangular window through which a “man”, perhaps a pilot, could be seen inside.
The stranger, whose head and shoulders were clearly visible, was working with controls or some kind of other instruments onboard the vehicle.
“I definitely saw a human being through the window,” the witness said. Squyres thought that the man observed by him looked entirely human.
Fascinated by what he saw, he got out of his car and began to approach the hovering vehicle, to take a better look…

He approached the UFO to within a hundred feet or so and almost instantly, the UFO began to rise vertically into the air. The pulsating, dull noise that all the time, accompanied the hovering UFO began to increase in volume.
It was like a “covey of a hundred quail taking off,” the witness said.

The object continued to rise slowly for some seconds, then suddenly accelerated and flew off at high speed.

Squyres reported the incident to the US Air Force. A few days later, an Air Force officer contacted him and asked to be taken to the site of the incident.
It has been found that in the center of the field the long grass had been flattened in a large circle about 18m (60ft) in diameter. Also, the grass stems had been bent over but not broken.
The affected grass in the field was “like the backwash of where the thing took off” and formed a swirling spiral pattern.

Samples of grass and soil were collected and sent for analysis. However, experts found nothing particularly unusual in them.

Officially, the encounter with the UFO was classified as a close encounter of the second kind. The sighting of a “pilot” of the flying object was considered as nothing more than the witness’s hallucination.
However, the flattened grass found in the area was definitely not any hallucination. It has confirmed the presence of the UFO which landed in the field, for an undefined period of time.

The later investigation, however, confirmed the reliability of the witness, William Squyres, and was termed “good” in the Special Report #14, completed March 17, 1954, where the case was mentioned among many other UFO incidents considered as reliable.

The UFO incident described by William Squyres coincides with another UFO sighting that occurred at about the same time (in August 1952) and was experienced by Mrs. Suzanne E. Knight, a resident of Maryland, USA.

Certain features regarding these two UFO encounters reported by William Squyres and Mrs. Knight, Seat Pleasant, Maryland are indeed strikingly similar to each other.

In August 1952, at around 9:30 pm, Mrs. Suzanne E. Knight was in her kitchen when she suddenly heard a strange buzzing noise similar to that of a large insect. The woman approached the window of her kitchen and looked out.
A flying object that bore a striking similarity to a fuselage of a plane, was descending rapidly at about 45-degree angle. Smoke was coming from the rear of the craft and her first thought was that an airplane was just going to crash but nothing like that happened.

Instead of an impact, the object of a dull silver color came to a hovering position approximately 300 feet above ground level and at a right angle to Mrs. Knight looking out of her kitchen window.
It was equipped with a row of large square windows and in one of them, Mrs. Knight noticed a helmeted man-like figure looking straight ahead.
No instruments or controls were visible.

On the underside of the UFO was an undercarriage with a row of smaller square windows lit up by a brilliant yellow light. Through these windows, Mrs. Knight was able to recognize the backs of little seats.

Another interesting detail was a small mast or perhaps an antenna placed at the front of the UFO.

This small vertical construction seemed to be very similar to vertical poles observed by William Squyres in his sighting on August 25, 1952.

The UFO incident lasted approximately three minutes, and at least for two minutes, the witness was continuously observing the object, having it in a clear view.
Mrs. Knight left the window only once trying to call local media. When she returned to the window, the UFO’s lights suddenly the lights went out; the object began to glow red and the witness watched its back-and-forth rocking motion.
The helmeted man-like figure was no longer visible and surprisingly, the undercarriage with small windows also disappeared.

“I thought maybe it had moved up into the fuselage because not even an outline of the car was visible, but it should have been because the street light would have shown it.”
Soon after the UFO left the area.
Mrs. Suzanne E. Knight witnessed UFO at close range but reported her sighting for the first time fifteen years later in 1967.

Who was the stranger, Mrs. Knight saw that summer evening in 1952?
According to Nicap.org “at present, there is not sufficient information concerning occupant reports to make any final judgments on their authenticity, although there is good evidence in a few cases to suggest that at least some of the witnesses could be telling the truth about such encounters…”