A. Sutherland  – MessageToEagle.com – Since the beginning of time, people have been looking at the sky observing celestial bodies, and unexplained atmospheric phenomena. Historical records reveal that people from all cultures and times have also observed oddly-shaped clouds and lights in the sky.

Ancient people could not always explain them as comets, planets Mars, Saturn, Jupiter, three stars of Orion’s Belt, or perhaps Sirius, the dog star located to the left of Orion. 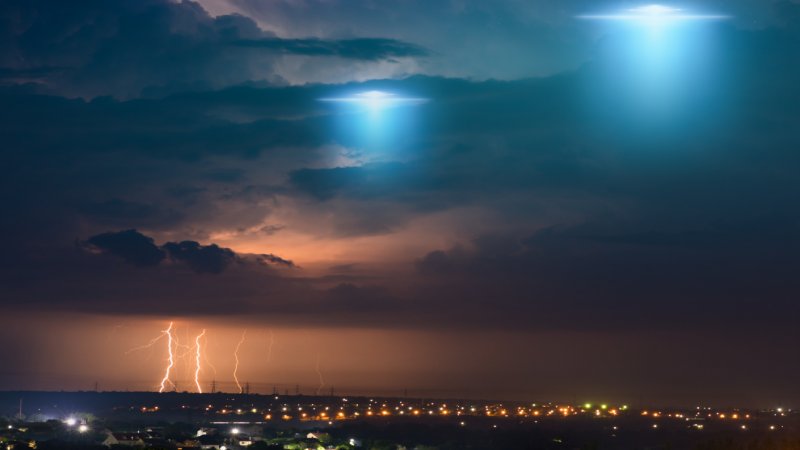 How do we explain the sightings of three suns or funnel-shaped clouds on fire and other unusual atmospheric phenomena? Are some of the weird objects seen in the skies cloaked UFOs?

The Day When Three Suns Appeared In The Sky

On June 6, 1797, the English newspaper Brighton Advertiser reported a very interesting sighting that cannot be classified as a normal and natural atmospheric phenomenon.

This extraordinary incident took place in the afternoon between the hours of 4 and 5 in St. Malo, a ring walled old town and port in Brittany in northwestern France on the English Channel.

The newspaper wrote that “three perfect suns were seen all in a row above the western horizon. The sky was very clear at the time, and there was no one who saw the unusual sight that believed that believes that it to have been a mirage or other atmospheric illusion. The central seemed more brilliant than his two luminous attendants, and between the three there seemed to be a communication in the shape of waves of light composed of all the prismatic colors. At about the same time a rainbow made its appearance at a short distance above the central sun, upside down – that is to say, the two ends pointed toward the zenith and the bow’s neel: toward the horizon.”

What did the inhabitants of St. Malo really observe in the sky? Could the “three suns” aligned “all in a row” be brightly shining unidentified flying objects?

Throughout the ages, people of all nations and backgrounds have seen strange clouds in the skies. Ancient Indian manuscripts mention Vimanas that were highly advanced space vehicles used by the gods. Present in the sky of IndiaThese powerful flying machines were  By using certain chemicals, a pilot of a Vimana was able to cloak his flying machine and give it the appearance of a cloud.

Strange clouds, which have been visible in the same place for hours have also been witnessed by humans throughout the history of mankind and still are, even in modern times. The Bible offers many good examples of such “clouds”, which were the most common description used when referring to Yahweh’s flying machines.

It is said that Yahweh was moving around the skies in thick, swift, bright, dark, low, huge, and fiery clouds. Possibly all types of clouds one can think of. Moses frequently mentioned the presence of the cloud chariots: “The Lord descended in the cloud”; “The Lord came down in a cloud”; “The Lord went before them by day in a pillar of cloud to lead them the way and by night in a pillar of fire.” The prophet Daniel was another who described the use of a cloudy chariot for cosmic transportation.

On August 1, 1888, at 1 o’clock a strange phenomenon was witnessed in Monroe, Georgia, USA. Mr. H.C. Harrison heard a loud noise and went outside to see what was happening.

“Though the sky was clear and sun shining in all its splendor a small funnel-shaped cloud was seen approaching from the southwest at a rapid rate, attended with a rumbling sound like thunder.

The whirling body rose and fell and occasional reports were heard described as sounding like an explosion of oil barrels on fire. The body passed between Mr. Harrison’s house and the colored Baptist church and crossed the street. It then turned in the direction of the old Stilwell place. In crossing a sandy flat a shaft of sand was elevated high in the air, having the appearance of almost a solid pillow.

The body afterward assumed the appearance of fire and great flaming tongues emerged from the top of as from a burning building, emitting heat for some distance, which was felt by those who witnessed the scene. In passing through a cotton patch some leaves were scorched to a crisp and others on the same stalk were unharmed. The body passed into a skirt of pines and disappeared.” (The New York Times August 2, 1888)

Did Mr. Harrison perhaps see an extraterrestrial craft that used clouds as a form of camouflage to move around unnoticed?

In 1973, physicist David Kubrin and his wife were visiting the Pinnacles National Monument in California. They suddenly noticed a light streak by just above the treetops, producing shockwaves in the air. Then it stopped without deceleration, as if weightless. The light was basically ovoid in form, and as it stopped it seemed to go into a spin, causing its light to dissipate. It lost its shape and merged somewhat with the surrounding air. David Kubrin took a photo when the object began spinning. It should be noted that beneath the Pinnacles there is a cave system largely still unexplored by archaeologists. Unfortunately, there are no surviving Indian legends that refer to the use of the caves.

Another incident that can easily be classified under the category unexplained atmospheric phenomena occurred on February 11, 1922, when a mysterious fireball was seen off the Brazilian coast.

On the arrival of the Lamport and Holt Liner, Vauban from South American ports, Frank C. Blessing, the second officer reported witnessing an unusual astronomical phenomenon, which lit up the ship and startled people on deck.

“The officer said he was in charge of the bridge at bells in the first watch at 9:30 P.M. when he saw a huge ball of fire rise above the horizon in the West and describe a low arc ahead of the ship and disappear below the horizon.
When he took his observations the fireball, which was as large as the full moon in the Southern hemisphere and surrounded by a flaming halo, lighting up the sky and sea, was about 10 degrees above the horizon. It was traveling at great speed and was in sight three minutes and twenty seconds.

In describing the strange sight Officer Blessing said: “The ball was very fiery and a brilliant red, with a tall and long fiery trail, which lit up the sea in all directions. The ship, and for a quarter of a mile around, was lit up like day, and the light was so brilliant that it dimmed the lamp in the binnacle and the smoking room lights, which caused passengers inside to rush out on deck to see what was the matter. I was scared at the strange sight because I thought it had to do something with the end of the world.

“It was too large for a meteor and came up from the horizon on the west and did not drop from the zenith.
I could not estimate how far it was from the ship when it passed across the bows. I called the Captain to see it but by the time he reached the bridge the ball of fire had disappeared. I cannot imagine what it could have been and the astronomers attached to the observatories could not explain it to me. When we arrived at Rio de Janeiro the scientists from the observatory came on board and questioned me as to the time I had seen the phenomenon and what it was like, and the same thing took place in Buenos Aires and Montevideo. From what the astronomers told me the big ball of fire must have been visible within a radius of 700 miles north, southeast, and west of the Vauban when we observed it.” (The New York Times February 20, 1922)

Unexplained atmospheric phenomena intrigue astronomers and other scientists, but also numerous ufologists who seriously consider that the presence of extraterrestrial spacecraft can explain many of these sightings.

Until scientists can present an adequate explanation for unexplained oddly-shaped funnel clouds, strange behaving whirlwinds, and mysterious fireballs, we can assume that certain unusual atmospheric phenomena can be related to the cloaked unidentified flying objects.