A. Sutherland  – MessageToEagle.com – On August 25, 1974, the unknown flying object registered on radar was traveling about 2,500 miles per hour. It was on a collision course with a small civilian aircraft that lifted off from El Paso, Texas, heading toward Mexico City. 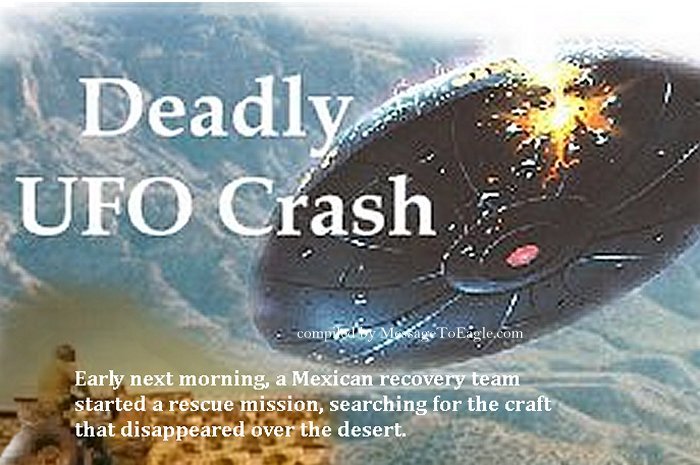 The small aircraft was in apparent danger and the catastrophe was inevitable, and this deadly collision was about to happen just outside of Coyame, Chihuahua, Mexico. It was a calm summer evening, and people were slowly turning in for the night.

Then, something unexpected happened…

In the meantime, at 10:07 PM five hundred miles away, the United States Air Defense System suddenly registered an unknown object flying over the Gulf of Mexico towards Corpus Christi, Texas.

The object was traveling at 2,200 (2530 mph) knots on a bearing of 325 degrees and at an altitude of 75,000 feet. In the beginning, it was assumed that the object – tracked by two different military radar installations – was a meteor.

However, radar operators quickly realized that the object they observed on the screen could not be a meteor. It was traveling and descending through steps, unlike that of a meteor that travels at higher speeds and descends in a smooth arc, not in level steps.

American Air Defense Systems were alerted, but there was no time for the military to scramble fighter jets to intercept the UFO.
Suddenly, the unknown flying object turned left, decelerated to about 1700 (1955 mph) knots, and turned to a heading of 290 degrees. It began a slow descent while entering Mexican airspace approximately 40 miles south of Brownsville, Texas.

Radar tracked the UFO approximately 500 miles to a point near a small desert town of Coyame, in the state of Chihuahua, not far from the US border, but then, the object suddenly disappeared from the radar screens.

It was believed that both the civilian plane and the spacecraft had collided, which was confirmed about an hour later when a  civilian radio station announced that an aircraft had crashed in the vicinity of Coyame.

Early next morning, a Mexican recovery team started a rescue mission, searching for the craft that disappeared over the desert. At approximately 10:35 a.m., Mexican recovery teams spotted the wreckage from the air. At the same time, Mexican authorities announced another crash site just a few miles away. Radio silence on the search was officially issued. All activity and radio contact between the Mexican recovery team and its headquarters had ceased. 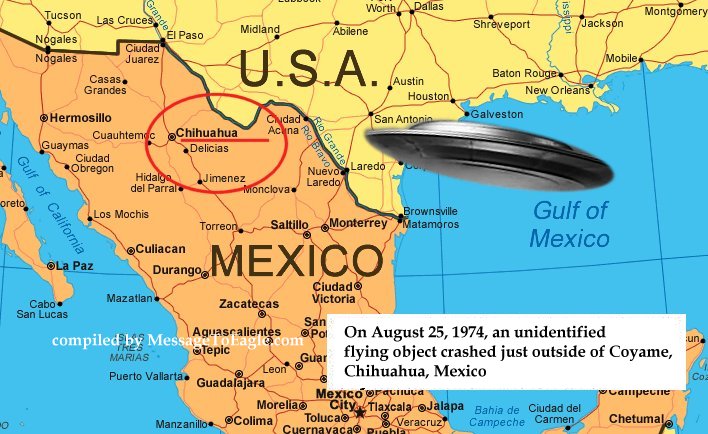 U.S. authorities offered assistance to help clean up and recover. The offer was declined.

According to researchers Ruben Uriarte and Noe Torres, who authored the book  “Mexico’s Roswell”, despite the refusal, Fort Bliss on the American side of the border, near El Paso, was forming a recovery team and continued to monitor Mexican recover efforts via air surveillance.

On the other side of the border, US intelligence followed the events. The Americans managed to intercept a Mexican military report and learned that the wreckage from the missing plane had been spotted from the air, just outside Coyame.

Shortly thereafter, the US received another report of a second plane on the ground a few miles from the first.  But it was not a conventional aircraft of any known type. It was a silver, disc-shaped object about 16 feet, five inches in diameter. The thickness was slightly less than five feet. Its surface had the appearance of polished steel. The craft had no windows, doors, markings and there were no bodies inside the craft. The spacecraft was damaged in two spots. The damage was most likely caused by the collision with the civilian aircraft.

However, as Ruben Uriarte, co-author of the “Mexico’s Roswell” said:

“What I found fascinating was that the crash may have been caused by both craft colliding at a lower altitude due to their vision being blocked by a high peak, hills, or mountain.

In other words, both craft met at an intersection of the mountain. If the plane was flying south and the craft was flying west, the pilot couldn’t have seen anything on his left until he cleared the mountain, colliding with the craft in front of him. In addition to this, the darkness of night was another key factor…”

The American recovery team included four helicopters, three small UHl Hueys, and a large Sea Stallion. When the Mexicans placed the UFO on a truck, US surveillance monitored the entire event. The Mexican convoy, with the damaged saucer, was now slowly moving away from the crash site.

What really happened at this point is unknown.

The Americans studied satellite photographs which revealed something must have gone wrong during the recovery. The photographs taken during high altitude overflights showed that the Mexican convoy had stopped and the US military could see a number of dead bodies. All convoy personnel was dead, most within the trucks.
Dressed in protection suits, American soldiers approached the silent convoy. The UFO was still on the truck. The recovery team reconfigured the straps holding the object on the truck and attached them to a cargo cable from the Sea Stallion that transported the spacecraft over the borders to US territory.

What happened next is unsettling. The American elite force gathered the debris, the bodies from the Mexican recovery team, the civilian craft, and then they destroyed everything with high explosives. There was no longer any visible evidence of what had taken place at this site on August 25, 1974.

Many ufologists who have studied this case, which became known as the Chihuahua UFO Crash tend to believe that the Mexicans were killed by an extraterrestrial biological agent of some sort. If the Mexican personnel was not wearing proper protection suits they were in danger of being exposed to a lethal unknown agent of some kind.

There were no bodies discovered inside the crashed saucer. This indicates that the spacecraft was most likely an unmanned probe. Perhaps it was an alien probe on a reconnaissance mission, examining and collecting data of our planet.

What happened to the crashed saucer is unknown. Some suggest that the debris was taken either to Wright-Patterson AF Base or Ft. Bliss. These are only two possible locations. The true whereabouts of the disc that crashed on August 25, 1974, outside of Coyame, Chihuahua, Mexico are unknown.

People who live near Coyame claim the UFO crash is a real event. This case remains unsolved, but there is a small newspaper story from the ‘El Heraldo de Chihuahua’ dated Oct. 27, 1974, that mentions a group of Mexican soldiers who died during transport.