Cynthia McKanzie – MessageToEagle.com – Philosophers and mathematicians have been arguing for centuries whether math is a system that humans invented or if it is of cosmic origin, perhaps even a divine knowledge that we simply discovered. This raises the question if God has the mind of a mathematician?

According to the mathematical Universe hypothesis, all structures that exist mathematically also exist physically.

In other words, we all live in a gigantic mathematical object- one that is more elaborate than a dodecahedron, and probably also more complex than objects […] which appear in today’s most advanced theories. Everything in our world is purely mathematical – including you,” Max Tegmark, Professor of Physics says.

There are naturally scientists who disagree with this theory.
“I’ve always had an extreme case of mixed feelings about this, thinking that Tegmark manages to bring together the extremely deep and the extremely dumb. 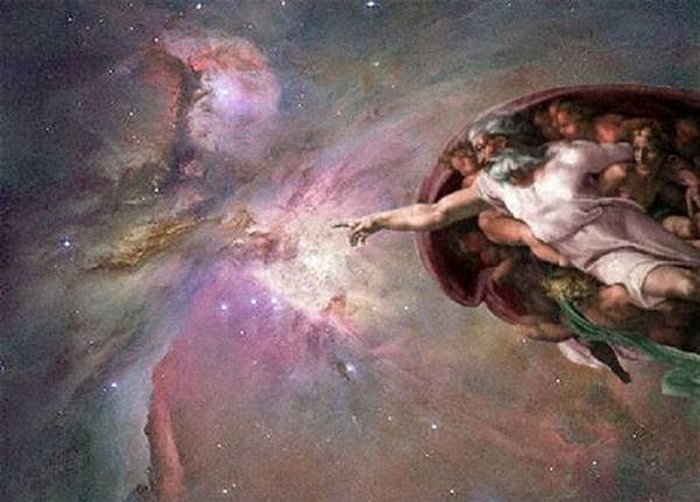 Thinking of the universe as a mathematical structure has turned out to be extremely fruitful, both for mathematics and for physics.

What is important though is that not all mathematical structures are equally important, central, or interesting, and this is the crucial point that Tegmark seems to me to be missing,” said Physicist Peter Woit.

Physicist Michio Kaku on the other hand, says that God could, in fact, be a mathematician.

“The mind of God we believe is cosmic music, the music of strings resonating through 11-dimensional hyperspace. That is the mind of God.”

“Some people ask the question “Of what good is math?” What is the relationship between math and physics?

For example, in the 1600s Isaac Newton asked a simple question: if an apple falls then does the moon also fall? That is perhaps one of the greatest questions ever asked by a member of Homo sapiens since the six million years since we parted ways with the apes. If an apple falls, does the moon also fall?
Isaac Newton said yes, the moon falls because of the Inverse Square Law. So does an apple. He had a unified theory of the heavens, but he didn’t have the mathematics to solve the falling moon problem. So what did he do? He invented calculus.

So calculus is a direct consequence of solving the falling moon problem.

So here is a situation where math and physics were almost conjoined like Siamese twins, born together for a very practical question, how do you calculate the motion of celestial bodies? Then here comes Einstein asking a different question and that is, what is the nature and origin of gravity?

Einstein said that gravity is nothing but the byproduct of curved space. So why am I sitting in this chair?

The Quest For A Cosmic Creator – Was The Universe Designed For Us?

A normal person would say I’m sitting in this chair because gravity pulls me to the ground, but Einstein said no, no, no, there is no such thing as a gravitational pull; the earth has curved the space over my head and around my body, so space is pushing me into my chair.

Now we have string theory. It turns out that 100 years ago math and physics parted ways. In fact, when Einstein proposed special relativity in 1905, that was also around the time of the birth of topology, the topology of hyper-dimensional objects, spheres in 10, 11, 12, 26, whatever dimension you want, so physics and mathematics parted ways.

Math went into hyperspace and mathematicians said to themselves, aha, finally we have found an area of mathematics that has no physical application whatsoever. Mathematicians pride themselves on being useless. They love being useless. It’s a badge of courage being useless, and they said the most useless thing of all is a theory of differential topology and higher dimensions.
Well, physics plotted along for many decades. We worked out atomic bombs. We worked out stars. We worked out laser beams, but recently we discovered string theory, and string theory exists in 10 and 11-dimensional hyperspace. Not only that, but these dimensions are super. They’re super symmetric.

A new kind of numbers that mathematicians never talked about evolved within string theory. That’s how we call it “super string theory.” Well, the mathematicians were floored. They were shocked because all of a sudden out of physics came new mathematics, super numbers, super topology, super differential geometry.

But you see, all this is pure mathematics and so the final resolution could be that God is a mathematician. And when you read the mind of God, we actually have a candidate for the mind of God. The mind of God we believe is cosmic music, the music of strings resonating through 11-dimensional hyperspace.

That is the mind of God.”