The mountain, which rises high above a barren desert plain, is sacred to the Navajos as ‘Tse Bi dahi’, or ‘the Rock with Wings’.

This name comes from an ancient folk myth that tells how the rock was once a great bird that transported the ancestral people of the Navajos to their lands in what is now northwestern New Mexico.

The Navajo ancestors had crossed a narrow sea far to the northwest and were fleeing from a warlike tribe.

Tribal shamans prayed to the Great Spirit for help. Suddenly the ground rose from beneath their feet to become an enormous bird.

The Navajo People In The Land Of The Four Sacred Mountains

For an entire day and night the bird flew south, finally settling at sundown where ‘Shiprock’ now stands. 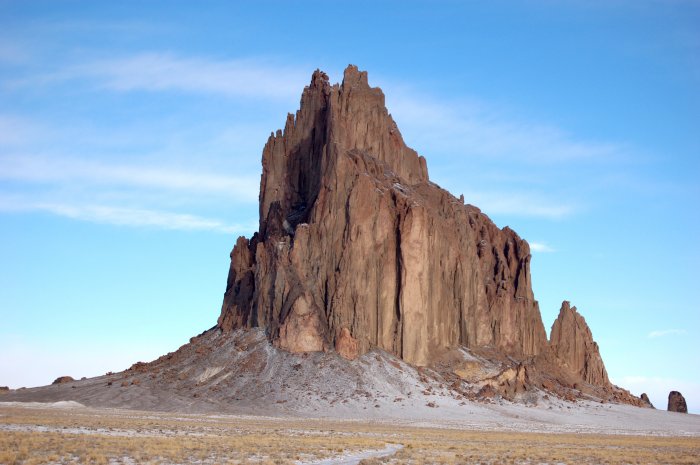 From ancient times to the more recent past, ‘Tse Bi dahi’ was a pilgrimage place of major importance. The rock was climbed in 1939. Since 1970, ‘Shiprock’ has been off limits to climbers. The peak and surrounding land are of great religious and historical significance to the Navajo people.

Climbing Shiprock has not been permitted officially since the early 1970s, though this may still be possible if permission is obtained.