Cynthia McKanzie – MessageToEagle.com – We, humans live in world with three spatial dimensions and the objects we interact with have height, width, and depth. According to the string theory, often called the “theory of everything,” there are more space dimensions, but the ones beyond three are effectively inaccessible.

As previously mentioned on MessageToEagle.com, if we could access higher dimensions we could see all past, present and future events appear before our eyes simultaneously?

We could see the construction of the pyramids at Giza, the end of World War II and an important event of the future we still know nothing about. History of the past, present and future would become available to us, just like a movie.

Our ability to access higher dimensions would give us possibility to time travel! But of course, we do not know if there are more than three dimensions in the Universe.

Some years ago, astronomers discovered that our universe is expanding at an ever-increasing rate, implying that space is not empty, but instead filled with dark energy that pushes matter away.

The Universe expands very slowly, and scientists are trying to determine what mysterious force is behind this process. Solving this riddle, can shed light on the fate of the universe.

Scientists who now studied dark energy, the mysterious force responsible for the expansion of the universe say that if there are extra dimensions in space, then these may be very small.

According to a study published in the Journal of Cosmology and Astroparticle Physics,  vast distances are not a big issue in the Universe. Much

Researchers suggest that the universe most probably operates in just the dimensions we experience on Earth.

“General relativity says gravity should be working in three dimensions, and [the results] show that that’s what we see,” said Kris Pardo, lead author on the study and a doctoral student at Princeton University.

Of course, since no-one really knows yet what dark energy is, we can speculate about the sizes of possible higher dimensions. They could be very small, but it doesn’t have to be the case.

Space-Time Warp May Exist Near Las Vegas – Could This Explain Why Time Slows Down In The Area?

This recent scientific argument is based on the idea that extra dimensions could be probed by gravitational waves.

Gravitational waves are disturbances in the curvature (fabric) of spacetime, generated by accelerated masses, that propagate as waves outward from their source at the speed of light.

Not long ago, scientists observed for the first time gravitational waves and light waves from the same event. Studying the universe with these two fundamentally different types of information is like observing the world with multiple types of sensory input, such as vision and hearing — it offers the possibility of a richer understanding of the world.

“This whole effort of looking for modified theories of gravity is in essence driven by the dark energy mystery. We’re trying to find: Is there a way that we can tweak the laws of gravity to explain why the universe’s expansion is speeding up?” said Tessa Baker, a cosmologist at Oxford University in England who was not involved in the study. 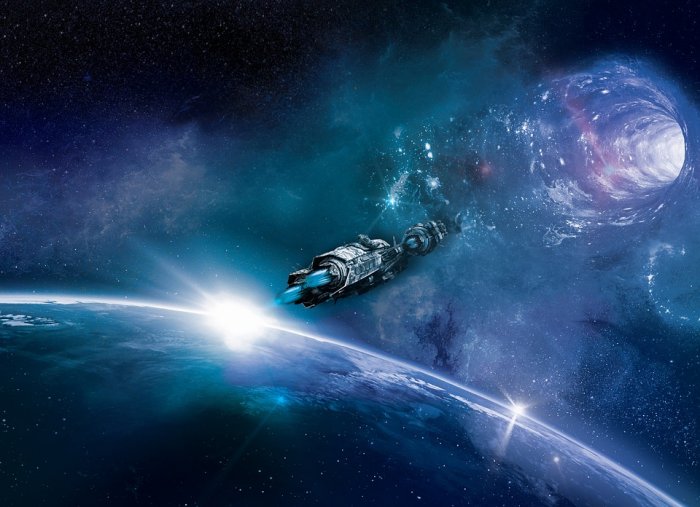 “This whole effort of looking for modified theories of gravity is in essence driven by the dark energy mystery. We’re trying to find: Is there a way that we can tweak the laws of gravity to explain why the universe’s expansion is speeding up?” said Tessa Baker, a cosmologist at Oxford University in England who was not involved in the study.

Basically, what researchers are saying is that if extra dimensions do exist and gravitational waves “leak” into those dimensions, this would cause them to weaken all across the Universe. The size of such extra dimensions would therefore smaller than we may expect.

It should be added that when scientists measured how far the gravitational waves and the light waves from GW170817 traveled to reach Earth, they didn’t find any evidence of the weakening that would be associated with extra dimensions.

The GW170817 collision event “was very, very local in cosmological terms — basically on our doorstep,” Baker said.   But physicists would really like to see more events at greater distances (which would have occurred further back in time), because those would reveal if gravity or dark energy have changed over time, Baker added.

We must get used to that we do live in a tree-dimensional worlds, but we cannot exclude the possibility of higher dimension and perhaps one day in the future the string theory that contends that there are 10 dimensions will be proven.