Cynthia McKanzie – MessageToEagle.com – One could say that Former Senator Harry Reid has done all he could to support the search for UFOs. Reid has accomplished more than other politicians who are often afraid to deal with the controversial subject of UFOs.

Reid believes in the existence of UFOs and extraterrestrial life and he urges politicians to take takes these subjects seriously.

In an interview with Motherboard he shared his views on UFOs and explained why he doesn’t think we are alone. 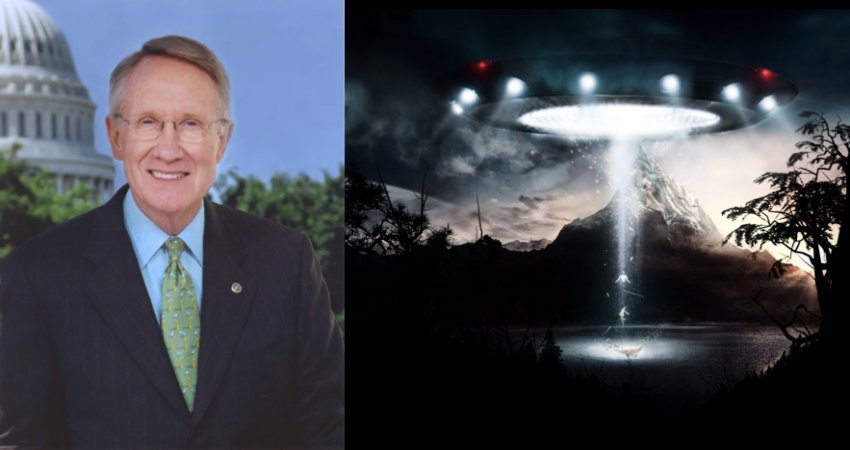 “I look at it this way,” Reid said. “The world as we know it today is extremely large. It’s so big I can’t comprehend it. And I think that we as human beings have to be a little short-sighted if we think we’re the only species in the entire universe. In the entire universe, there is for sure more than one [species].

We know that unusual things have happened over decades on a regular basis and we know that in the Dakotas, a missile launching facility has been shut down because of something over one of them basically shutting off the power to them. We know the accounts off the coast of San Diego where ships have found these unusual things in the water and it shut down the communications on the ships,” Reid said.

He continued by adding: “I think that we need to fully understand this and have no boundaries on what we look for,” he added. “And I repeat now for the second or third time that people should not be afraid. I think that too many of my legislative friends are afraid to go into this because someone will think that they’re some kind of a nutcase. But I went into it and I don’t think it hurt me politically.”

As most have heard by now, UFO videos were recently officially released by the Pentagon.

“The Pentagon has not been terribly forthcoming about AATIP when asked or FOIAed, and recently said that the program had nothing to do with UFOs. Reid said from the earliest days, this was a UFO program and was always designed to be a UFO program. Much of the research was carried out by Bigelow on the infamous Skinwalker Ranch, a paranormal hotspot in Utah. Reid said he has never visited Skinwalker Ranch but that he followed the program very closely while he was a Senator,” VICE reports.

“Even some of my staff told me to stay away from all this. But I never looked back. It was something I was interested in. I thought it was something that the government should be involved in.

UFOs And Space Travel: How Do They Get Here And Where Do They Come From?

I of course followed it very closely and talked to people that worked there, but I made the decision that it was very difficult for me to go there because I was a government employee as a member of the Senate. And I guess I could have paid my own way up. But I didn’t feel that it was appropriate for the government to take me, and so I thought well, I’ll just listen to others.

But you know there are all kinds of interesting reports about people who have gone there … there was too much weird stuff going on up there. But no, I have not been there,” Reid said.

Reid says studying UFOs is important government work that should continue to be funded. He also emphasizes researchers should focus on the science of UFOs and not little green man.

“I think the legislators are afraid to do this for fear they’ll be charged with wasting taxpayer dollars,” he said. “Even some of my staff told me to stay away from all this. But I never looked back. It was something I was interested in. I thought it was something that government should be involved in. And I think we have the Pentagon and other government officials don’t continue work on this it’s a really unfortunate thing for the country because other countries are doing it,” Reid said.

You can listen to the full interview with Former Senator Harry Reid on CYBER, which is available on all podcast platforms.

Reid is not the only one who think it’s time to start taking the UFO subject more seriously. As previously reported, Tyler Cowen, Professor of economics at George Mason University says the UFO phenomenon is worthy of close attention and investigation. Even if you think UFOs are nonsense, there is still reason to determine who or what is behind these sightings.

“I am struck by the contrast between those who see this as an important question and those who think the whole thing will turn out to be an error or some kind of optical illusion.