Cynthia McKanzie – MessageToEagle.com – Are you afraid of spiders? If so, let’s hope you will never encounter Goliath Birdeater.

Goliath Birdeater is no ordinary spider. It is considered to be the world’s largest spider. It has eight legs and their span can reach up to a foot (30 centimeters) or about the size of a child’s forearm. 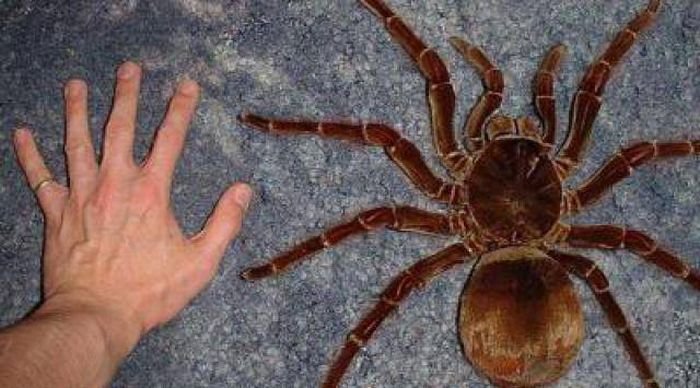 This huge spider’s body is the size of a large fist and of course, it’s very heavy too. Goliath Birdeater can weight up to 6 oz. (170 grams) – that equals the weight of a small puppy.

The Goliath Birdeater (Theraphosa blondi) belongs to the tarantula family Theraphosidae. It can be found in northern South America.

Although it is huge and might look scary to some, the spider is pretty harmless to humans.

It carries venom in its fangs and has been known to bite humans when threatened. It should be remembered that like other spiders of the tarantula family, it bites only in self-defense. A bite causes swelling and mild pain for a few hours. 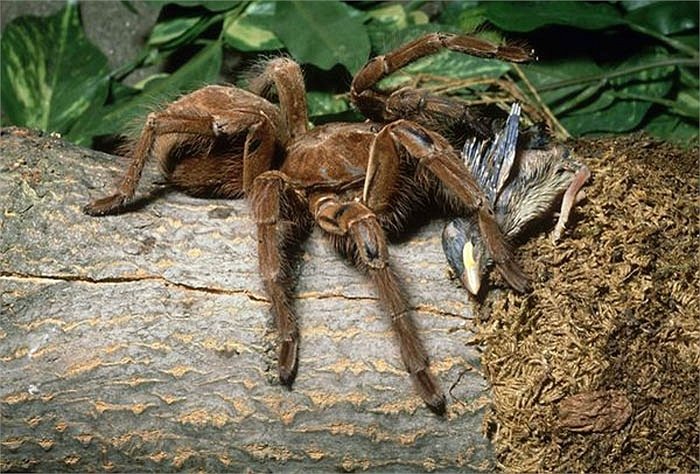 Goliath Birdeater is huge but harmless to humans.

Despite its name, the Goliath Birdeater doesn’t usually eat birds. It is capable of doing so, but Goliath Birdeater is in most cases satisfied with eating what it finds on the ground, like for example earthworms, or other small invertebrates, but it can also consume larger animals such as frogs, small snakes, beetles, lizards, and even bats.

The spider has a number of self-defense methods. It can scare off potential behavior called stridulation in which it rubs the bristles on its first two legs and pedipalps together to create a hissing sound. It can be loud enough to be heard up to 15 feet away!

The spider can also strike a spooky pose by arching the first two pairs of its legs back and “hinging back the fangs,” so it’s in perfect bite mode.

It can also flick barbed hairs from its abdomen at potential enemies — the hairs can irritate the skin of such foes.

Its lifespan depends on gender. Females mature in 3 to 6 years and have an average life span of 15 to 25 years. Males die soon after maturity and have a lifespan of 3 to 6 years. Goliath Birdeater’s colors range from dark to light brown with faint markings on the legs.