MessageToEagle.com – Known as the ‘Girl in the Glass Coffin’ or ‘Sleeping Beauty’, Rosalía Lombardo is widely considered one of the best preserved mummies in the world.

The girl died in 1920 at the age of two of pneumonia in 1920. Rosalia’s father was so sorely grieved upon her death that he approached Dr. Alfredo Salafia, a noted embalmer and taxidermist, to preserve her.

Dr. Salafia performed the procedure that would preserve Rosalia. For about a century, the exact formula remained a mystery, lost to the grave with Salafia. In 2009, a biological anthropologist named Dario Piombino-Mascali tracked down the eternal formula through Salafia’s living decedents.

According this miraculous formula, the chemicals included formalin, zinc salt, alcohol, salicylic acid and glycerin. The combination of alcohol and the climate conditions within the catacombs would have dried Rosalia’s body. Glycerin would have allowed the body to mummify and salicylic acid prevented the growth of mold. 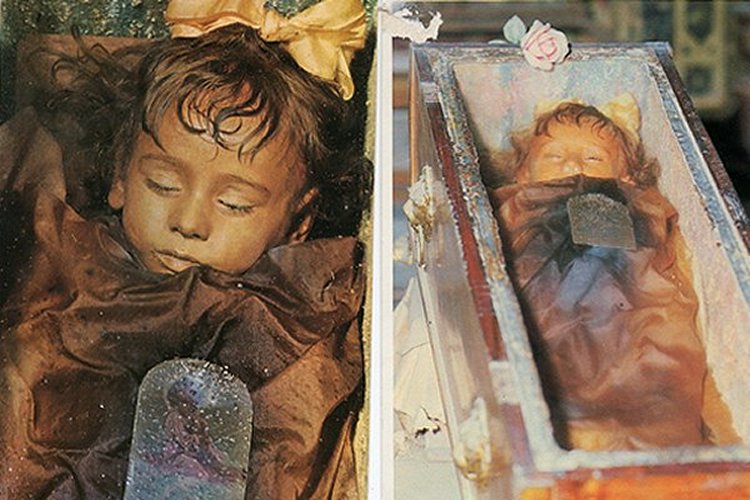 The magic ingredient was zinc which gave the body rigidity, essentially turning it into wax. She was one of the last corpses to be admitted to the Capuchin catacombs of Palermo, Sicily where about 8,000 mummies are being kept. She soon became one of the most well-known.

Her preservation is such that it appears as if she were only sleeping. Today, thousands of visitors visit the Sicilian Catacombs to take a look and admire this little girl that never had the chance to enjoy life.

According to the Peruvian journal El Comercio, scientists interested in learning more about the embalming techniques employed in Rosalía’s body put a camera inside her sarcophagus, capable of taking pictures every 60 seconds.

What happened next came as a surprise.

Malta’s Prehistoric Dark Secrets – What Experiments Were Conducted On The Island’s Bizarre And Mysterious Hypogeums?

The images taken by the camera seemed to show the little mummy’s blue intact eyes were opening and closing several times every day.

This weird phenomenon has been the subject of various speculations for some years.

Is it really possible for a deceased being to blink with the eyes? How can this behavior be explained?

Some scientists said that the blinking is caused by the natural humidity in the crypt where she’s kept. Just recently Italian researchers have once again debunked the claims that Rosalía Lombardo opens and closes her eyes every day.

“It’s an optical illusion produced by the light that filters through the side windows, which during the day is subject to change,” Dario Piombino-Mascali, curator of the Capuchin Catacombs said.

“They are not completely closed, and indeed they have never been,” Piombino-Mascali said.

There are also some skeptics who say that that the real body of Rosalia was replaced with a realistic wax replica. However, the child’s coffin was X-rayed and it has been discovered that not only a skeletal structure but that her organs were still intact. Her brain was perfectly visible only having shrunk 50% due to the mummification process.