MessageToEagle.com – Located in northeast Louisiana, North America about 25 miles from Lake Providence is a giant C-shaped, 3,500-year-old earthwork known as Poverty Point, a place that remains a prehistoric mystery.

The Poverty Point mounds are older than the Parthenon in Greece, the Great Wall of China, and the Colosseum in Rome. Some archaeoastronomers have discovered solar alignments at Poverty Point and suggested this place is the world’s largest ancient solstice marker.

The bird-shaped mound was constructed by the local hunter-gatherers of the Poverty Point culture. The inhabitants of Poverty Point used the natural resources that were plentiful in the Mississippi floodplain. Their culture is considered a pre-agricultural society, but the amount of man power and the thousands of hours of work that it took to construct the earthworks suggests a highly evolved society, living and surviving together.

The ancient site consists of six enormous, concentric earthen ridges and several large mounds, including one of the largest in North America. The five aisles and six sections of ridges form a partial octagon, and archeologists think the ridges, once 5 feet (1.5 meters) high, were foundations for dwellings. 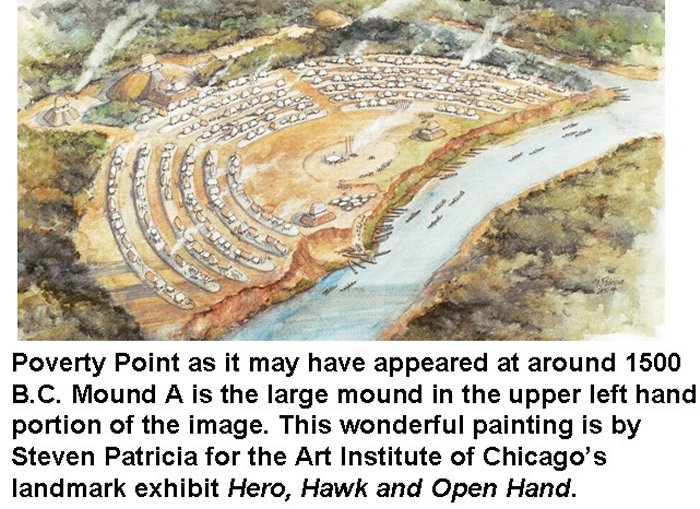 Archaeologists excavating at the Poverty Point site have unearthed hundreds of intriguing ancient artifacts. Bird effigies, stone tools, spears, and gems that are not native to Louisiana have been found, along with hundreds of round, clay balls. Historians believe that these clay balls were used for cooking. The balls were heated in a fire and then placed in a pit, which created an oven for cooking meat and other foods.

The massive earthworks have been nominated to become a UNESCO World Heritage Site because of its cultural significance.

What Was The Purpose Of The Earthworks?

Scientists are still puzzling out the purpose of the earthworks. Over the years, various theories have been presented. Some scholars suggest the Poverty Point site was a permanent residence of a large, socially, politically and economically ranked population. The town was spatially organized in a geometrically symmetrical order.

In the beginning of 1980, archaeoastronomers Kenneth Brecher and William Haag discovered what they considered to be solar alignments at Poverty Point. The shape of the overall site is semi-octagonal, different in design from any others in the United States.  The aisles or avenues define a central point within the site, although it is not marked in anyway that has been identified.

According to researchers Brecher and Haag, two of the avenues may have pointed to the setting location of Canopus (190° degrees) and Gamma Draconis (344° degrees).

Lyman Lake Petroglyphs Left By Ancestors Of The Hopi Indians

In the book Knowledge in Motion: Constellations of Learning Across Time and Place , Andrew P. Roddick ,an assistant professor in anthropology at McMaster University writes that “Poverty Point was erected on a meridian, actually tow meridians spread 600 meters apart. In practice, the layout of mounds on a straight line is merely a matter of sighting and back-sighting, but the practice of triangulation adds the possibility of measurement across space. It is in fact depended on known distances between points.”

It is possible that Poverty Point is the world’s largest ancient solstice marker, but much more research must be conducted before we can reach this conclusion.

For now the function and use of Poverty Point remain a mystery.