A. Sutherland  – MessageToEagle.com –  On November 16, 1986, a UFO was sighted by the crew of a Japanese jumbo freighter aircraft. Air Route Traffic Control Center in Anchorage, Alaska, had reported that the unidentified flying object had been detected on radar.

It is one of the most interesting UFO sightings reported by Japanese airline pilots. 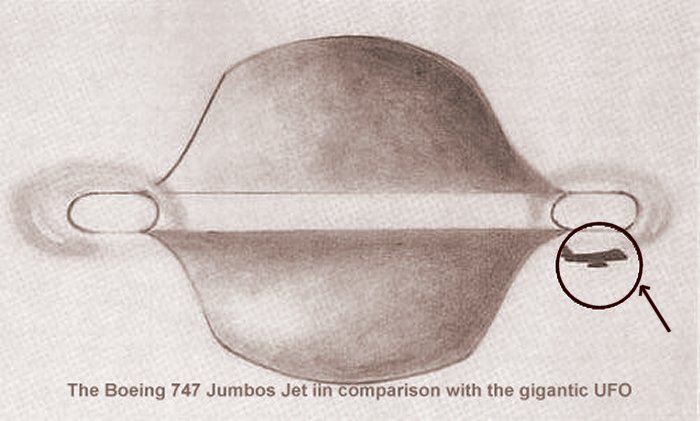 The flight route of the Boeing 747 carrying a cargo of French wine, was from Paris to Anchorage,
Alaska and then to Tokyo with a stop at Reykjavik, Iceland.

The airplane with the crew of three (Captain Kenju Terauchi, First Officer Takanori Tamefuji and Flight Engineer Yoshio Tsukuda) landed in Reykjavik and the next day took off heading northwest over Greenland.

The aircraft reported its position to the flight control center at Edmonton, Alberta, and continued over northern Canada, flying at an altitude of 39,000 feet. The crew began making final preparations before descending to Anchorage Airport.

Suddenly Captain Terauchi and his crew spotted unusual white and yellow lights ahead, below, and to the left of his airplane and thought these were originating from military aircraft.

While the unidentified lights continued to accompany the Boeing 747, first officer Takanori Tamefuji took
radio contact with Anchorage air traffic control and asked if there were other aircraft in the vicinity.

Both Anchorage and a nearby military radar station informed that they were picking up weak signals
from the 747’s vicinity.

The airplane’s crew observed one huge lighted object and two small lights were insight on their radar for more than a half-hour. They watched as they flew 550 km (350 miles) southward across Alaska from
Ft. Yukon toward Anchorage Airport.

Captain Terauchi said the following about the unidentified lights:
“They were flying parallel and then suddenly approached very close…”
He also caught a short glimpse of the main object’s walnut-shaped silhouette and estimated it to be “two times bigger than an aircraft carrier”.
The flight crew saw and tracked three unidentified objects.

The pilot later wrote in a statement for the Federal Aviation Administration that after several minutes, the lights suddenly darted in front of the 747, “shooting off lights” that lit the cockpit with a warm glow.
Captain Terauchi, sitting in the left-hand seat saw the lights in front of and below the airplane, when they began to move erratically, “like two bear cubs playing with each other…” 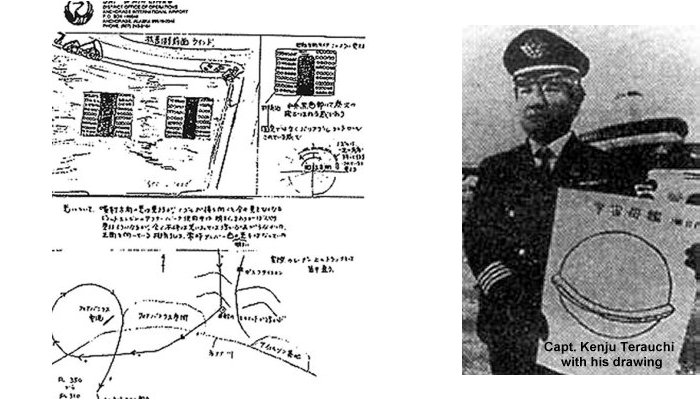 As the Boeing 747 was passing over Eielson Air Force Base, near Fairbanks, the captain noticed something very large behind his airplane. It was something unusual. The dark silhouette of a gigantic “mothership” larger than two aircraft carriers was clearly visible.

He asked air traffic control for permission to take his airplane around in a complete circle and then descend to 31,000 feet. The objects still followed his plane through both maneuvers and during several turns for thirty-two minutes before vanishing.

The communication between Captain Terauchi of JAL and ground controllers was later published by the
Federal Aviation Administration and is as follows:

6:27 PM: The ROCC contacted ZAN to advise they were no longer receiving any radar returns in the vicinity of JAL1628.

6:31 PM: JAL1628 advised that the ‘plane’ was ‘quite big,’ at which time the ZAN controller approved any course deviations needed to avoid the traffic.

6:35 PM: JAL1628 requested and received a heading change to two one zero (210 degrees, or southwest). The aircraft was now in the vicinity of Fairbanks and ZAN contacted Fairbanks Approach Control asking if they had any radar returns near JAL1628’s position. The Fairbanks Controller advised they did not.

6:38 PM: The ROCC called ZAN advising they had confirmed a ‘flight of two’ in JAL1628’s position. They advised they had some ‘other equipment watching this,’ and one was a primary target only.

6:42 PM: The ROCC advised it looked as though the traffic had dropped back and to the right of JAL1628, however, they were no longer tracking it.

6:45 PM: ZAN issued a 10 degree turn to a northbound United Airlines flight, after pilot concurrence, in an attempt to confirm the traffic.

6:50 PM: The northbound United flight advised they had the Japan Airlines flight in sight, against a light background, and could not see any other traffic.

On the night of November 17, 1986, the sighting of at least one of the UFOs was confirmed by FAA and U.S. military ground radar.

Later Terauchi also reported that the UFOs moved very quickly and were able to stop suddenly. The light from the gigantic “mothership” was so bright that it lit the airplane’s cockpit and he could feel the light’s heat on his face.
Additionally, the experienced Japanese pilot admitted the entire crew had been watching the UFOs for about six minutes before notifying anyone on the ground.

As reported by FAA agent Ronald E. Mickle after he interviewed the JAL crew:
“…Captain Terauchi stated he first sighted (visually) the unidentified air traffic (UAT) in the vicinity of Potat intersection and the ADIZ (Air Defense Identification Zone). The aircraft he was piloting (B747) was at flight level 390, airspeed 0.84 Mach… the UAT was in front of his aircraft at a distance of approximately seven to eight nautical miles for approximately 12 minutes… the distance was indicated by the onboard Bendix color radar.

Captain Terauchi stated that while he had a visual on the UAT, he spotted yellow, amber and green lights, and a rotating beacon, but no red lights… there were two distinct sets of lights but appeared to be joined together (as fixed to one object).

UFO Videos Officially Released By Pentagon – Is Extraterrestrial Disclosure Next?

Captain Terauchi stated that during the visual sighting, the lights of the UAT changed from a horizontal position to a vertical position and had positioned itself from in front of the B747 to the port side. The UAT stayed on the port side for approximately 35 minutes…

FAA, ATC (Air Traffic Control) had indicated to him the presence of a primary target in addition to his aircraft…”

The FAA investigated the incident and found the crew to be “normal, professional and rational”. US Federal Aviation Administration authorities admitted that the objects were tracked on radar. However, they were not registered on the radar tapes.

After the incident, the authorities also tried to attribute the radar targets to weather effects.

“We are accepting the descriptions of the crew, but are unable to support what they saw,” an FAA spokesman said.

Japanese Defense Minister Taro Kono has announced his country should have a plan for possible UFO encounters. Even if Kono is not convinced UFOs exist, this particular sighting shows pilots do encounter unknown flying objects and it is understandable that Japan wants a defense plan for UFO encounters.