A. Sutherland – MessageToEagle.com – In Greek mythology, the Erinyes, (also known as Furies) were three goddesses of revenge and retribution. The women resided in the underground world and were considered monstrous and evil.

How the Furies were created remains unclear. According to one legend created from the blood of the Titan Uranus, when his son Cronus castrated him to take revenge on the loss of his siblings.

According to another legend, the Furies were the daughters of Nyx, who was the symbolization of the night and the daughter of Chaos.

The “infernal goddesses” correspond to the Dirae in Roman mythology, and some suppose that they are called Furies in hell, Harpies on earth, and Dirae in heaven.

Their appearance was remarkable and hideous.

They are described as having snakes for hair, dog’s heads, coal black bodies, bat’s wings.

They had a burning breath and poisonous blood was dripping from their eyes.

In their hands, they carry brass-studded scourges, and their victims die in torment. 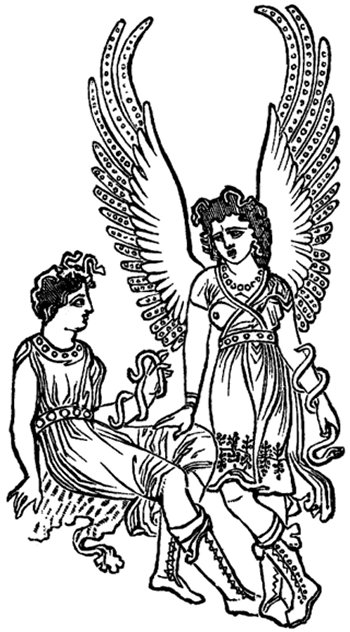 Two Furies, from a nineteenth-century book reproducing an image from an ancient vase.

The role of the Furies was to persecute crimes such as disrespect, injustice, perjury or arrogance and-first and foremost- murder, especially the murder inside a family. The Furies were regarded as very evil because their lust of punishment knew no bounds, for they kept punishing a sinner even after his death, until he finally would show remorse.

One of the most frequently repeated examples of ancient Greek literature featuring the Erinyes is found in examples that focus upon the Orestes myth.

Orestes was belonged to the third generation of the House of Atreus, and was the last to suffer the curse of the Erinys which plagued his house.

As the story goes, with Atreus and his brother Thyestes were rivals for the throne of Mykenai. 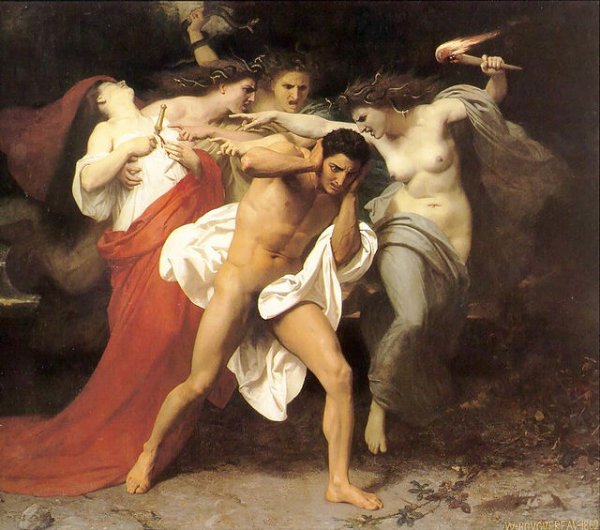 The Remorse of Orestes, where he is surrounded by the Erinyes, by William-Adolphe Bouguereau, 1862.

When Atreus won the throne, Thyestes conspired against him, seducing his wife in order to gain possession of a golden ram that would win him the kingdom. Atreus, however, returned from exile and regained his throne, expelling Thyestes in the process. But, desiring a harsher penalty, he invited his brother back, murdered his two sons, and served them up before him as a meal. Later, Thyestes’ son Aigisthos avenged this crime with the murder of Atreus. But his sons, Agamemnon and Menelaus, in turn, drove him from the throne.

When Agamemnon was away fighting the Trojan War, Aigisthos returned and seduced Agamemnon’s queen Klytaimestra and conspired with her to murder the king upon his return. A curse fell upon the guilty pair, and the young Orestes was compelled by his father’s Erinys to exact his vengeance.
Orestes himself was afterward plagued by the Erinys of his mother Klytaimestra for the crime of matricide, until he was purified of the blood-guilt by Apollon.

The reason Erinyes are also known as Furies is that their name in Greek mythology means literally “the angry ones”.