Ellen Lloyd – MessageToEagle.com – Many have tried to find the legendary ancient golden city of Vineta, but so far, the location of the place remains an ancient unsolved mystery.

Did Vineta really exist or was is it only a mythical city? Do the ancient ruins of Vineta lie hidden somewhere beneath the water of the Baltic Sea?
Ancient stories tell Vineta was once a very prosperous trading center somewhere on the Baltic Coast. During the late 12th century it disappeared beneath the water. Legend tells Vineta’s inhabitants ignored omens of a coming disaster and the city was submerged as punished for moral decay.

Today, Vineta has become known as the Atlantis of the North and people still go to the beach with the hope they will catch a glimpse of the ancient underwater city.

According to legends, Vineta was visited by traders from many corners of the world. It was one of the most important ancient commercial cities in Europe and visited by Vikings, Slavs, Spaniards, Saxons, people from the Mediterranean and businessmen from surrounding Baltic regions. 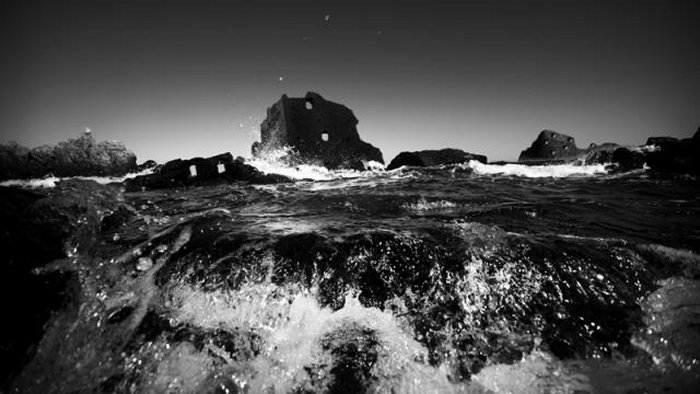 Before Vineta was submerged it was a major trading center. Image credit: Matthias Gründling

The ancient city of Vineta was flourishing and news about the city reached people in distant parts of the world. Ibrahim Ibn Yaqub, a 10th-century Hispano-Arabic, Sephardi Jewish traveler, who was probably a merchant and may also have been engaged in diplomacy and espionage described it as “a large city by the ocean with twelve gates, the greatest of all cities in Europe, farthest north-west in the country of Misiko (Poland) in the marshes by the ocean.

It is said that Vineta had a population of at least 50,000 inhabitants and the city was even richer than Constantinople.

Warnings Of A Coming Disaster Were Ignored

According to legend, three months, three weeks, and three days before the destruction of the city all people were warned of the coming catastrophe. Strange bright lights were seen in the sky and wailing mermaid appeared. The water woman cried three times in a high, startling voice:

“Vineta, Vineta, rich city, Vineta is to be destroyed because she has done much evil.”

Even today, bells from the depths of the sea will be heard.

Elders advised all people to leave the city, but everyone was reluctant to abandon a place famous for its gold and wealth. Inhabitants of Vineta lacked modesty and had become greedy.

The city of Vineta was deluged in 1170 and vanished beneath the waves of the Baltic Sea. It was believed that Vineta had been destroyed as punishment for immorality.

Where Is Vineta – The Atlantis Of The North?

The location of Vineta remains a controversial subject and there are many disagreements where the legendary city was situated. Some researchers have suggested that Vineta may have been on Wolin, an island surrounded by the Baltic Sea to the north, the Dziwna River to the east.  Archaeological excavations have revealed that Wolin was once a major Viking trading center.

Jomsvikings were elite warriors who trained at Jomsborg.

According to intriguing stories told in the Icelandic Sagas courageous Norse warriors were based at Jomsborg, a fortress on the southern Baltic shore where Jomsvikings had their headquarters.

Jomsborgs has never been found and there is not sufficient evidence to claim Vineta was on the island of Wolin. According to historian Wilhelm Ferdinand Gadebusch Wolin did not have the deep water port that Vineta must have had.

Another possible location of Vineta is Usedom. Its nickname is Sunshine Island and it is located in the Baltic between Germany and Poland. However, there is very little evidence of Slavic habitation in the area which makes it unlikely this could have been Vineta. Several maps published between 1633 and 1700 have the sunken “Wineta” east of the island of Ruden northwest of Usedom. The origin of this thesis is the All Saints flood of 1306 that leftover Ruden and other small islands from a much larger landmass that prior to the flood had existed between Mönchgut and Usedom.

Coloured copperplate engraving from 1590 by Braun and Hogenberg (which is probably the oldest pictorial depiction of the town Barth. Image credit: Barth Stadt

It has also been speculated that Barth, a medieval town on a lagoon in northeastern Germany is linked to the legendary golden city of Vineta. Barth was an important trade center during the Middle Ages.

Since 1999, the City of Barth has been allowed to call itself the City of Vineta. Two scientists from Berlin have suggested that Berlin the “Atlantis of the North” to be in the mud of Barth Bodden (Barth lagoon), but it has not been officially confirmed that this is the real location of Vineta.

Whether the story of the golden city, if Vineta is mere myth or based on real events, cannot be determined until the ancient ruins will finally be discovered. Many myths have been confirmed by modern science and perhaps it is only a matter of time before underwater archaeologists come across the submerged ancient city hidden somewhere in the Baltic Sea.