MessageToEagle.com – In Norse mythology, Odin is a god of war, death, poetry and wisdom.  He often spoke in beautiful poems.

But before he became the god of poetry, he had to steal and consume the Mead of Poetry; a magical potion, even called “the stirrer of inspiration”, was a source of unlimited knowledge, inspiration and eloquence.

The magical and priceless drink was protected by a giant Suttung and his daughter. Odin had to call on all his powers of deception and cunning to steal it.

As we know, Odin was always seeking wisdom, even at great personal cost. He was already a great master of supernatural powers, but he wanted to go to a further extreme to master even more. 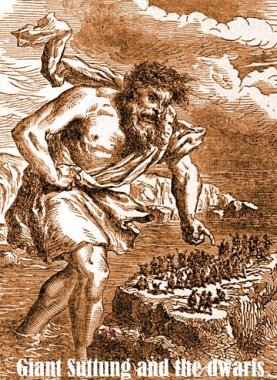 Eventually he became known as the God of Poetry, speaking in beautiful poems and gladly gave poetic talent to gods, humans and others he considered worthy of this supernatural gift.

But before that happened, Odin had to figure out how to access to the mountain, which was giant Suttung’s home.

Disguised as a mortal and calling himself, Bolverk (‘ Evil-Doer’) , Odin set forth to obtain the mead.

He took up lodgings with Suttung’s brother, a giant Baugi, who was the owner to nine slaves.

Odin murdered them and offered to do their work, for a price of one drink of Suttung’s mead of poetry.

Baugi was not authorized to accept such request, but he agreed.

When winter came, Odin/Bolverk completed his work and came to Baugi  demanding his reward. Both men set off for Suttung’s mountain dwelling.

When they arrived, giant Suttung refused to take any part in Bolverk and Baugi’s agreement.

Mead: Secret Drink Of The Vikings And Gods – Was It An Ancient Antibiotic?

Mysterious And Powerful Valkyries In Norse Mythology: The Choosers Of The Slain

Norse Shamanism: A Völva And Her Prophecies Were Feared Among Norse Gods And Vikings

Then, Bolverk decided to use en auger (an instrument for boring) and ordered Baugi to bore a hole in Hnitberg (Hnitbjörg) mountain, which, as he believed, contained the mead.

Soon, a tunnel had been created and Bolverk could transform into a snake and crawl into an inner chamber, where he changed his appearance once again into a young, beautiful man in order to meet Suttung’s daughter, Gunnlöd (whose name means “invitation to the battle”).

She guarded the precious liquid so Odin had to spend three nights with her, and after this time together, Gunnlöd, who fell in love with him. Thus, he could have three draughts of mead.

But each emptied a container. Then, Odin turned himself into an eagle and flew to Asgard, the kingdom of the Norse gods.

When the Aesir gods saw Odin flying towards them, they were ready to help him by placing special containers in the courtyard. Thus, Odin who flew overhead could release the mead into them, and so he did.

He also gave the mead to the Valkyries for reviving dead heroes upon their arrival in Valhalla, and to all mortals on earth.

Did Odin really want to give mortals some of the magical potion?

In another version of this beautiful myth, we learn that furious Suttung, also transformed into an eagle following Odin in pursuit. Being very close behind, Suttung caused Odin to spill some of the magical drink outside the walls of Asgard, and since that time any mortal  can benefit from it – if he/she so wishes.