A. Sutherland – MessageToEagle.com – From about 700 to 300 BC one particular group of migratory peoples, identified as Scythians by the Greeks, suddenly appeared on the Eurasian steppes.

Some modern scholars suggest three theories to explain their sudden and mysterious appearance. Some believe they migrated there from the north, others from the east, or perhaps from the south.

Although the geographic origins of the Scythian people are hotly debated, evidence for the time of their first appearance in history is not. They suddenly appeared at the same time and near the same area of the Israelites’ disappearance.

Cannabis was not only used by the Scythians for relaxation, but for ceremonies for the dead.

They are mentioned in the Bible and several other ancient sources. However, for some unknown reasons they vanished without a trace. What happened to them?

The Scythians were nomads who along with wild horses roamed the grasslands stretching from the Carpathian Mountains of Eastern Europe to what is now southeastern Russia. They were excellent horsemen and were among the first to use the saddle and stirrup.

By the eighth century BC, military action taken by the Chinese Emperor Hsuan forced people migration to west. Scythians first occupied the territory around the Black Sea about 700 B.C. Seeking wealth, they sacked the Assyrian capital, Nineveh. 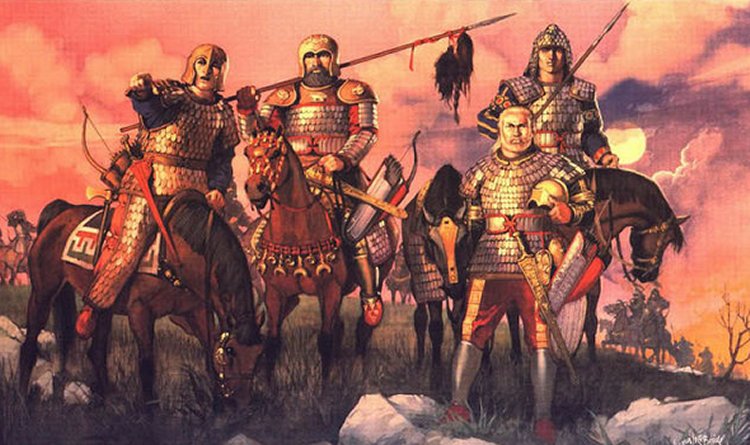 The Scythians were feared and admired for their prowess in war and, in particular, for their horsemanship. They were among the earliest people to master the art of riding, and their mobility astonished their neighbours.

Assyrian sources place their appearance between the Black Sea and the Caspian Sea in the time of King Sargon (722-705 BC), a date which closely corresponds with that of the establishment of the first group of Scythians in southern Russia.

Curiously, this date also corresponds with the disappearance of the captives from Israel’s northern kingdom.

Later, the Scythians allied themselves with Assyria against Media, Babylonia, and other nations. Their attacks touched even northern Egypt. The fact that the city of Beth-shan in northeastern Israel was later called Scythopolis may indicate a period of Scythian occupation.

In time, the Scythians settled in the steppes of present-day Romania, Moldova, Ukraine, and southern Russia, they grew wealthy, trading grain, honey, fur, and cattle in exchange for Greek wine, textiles, weapons, and works of art.

The Scythians are the oldest nations on Earth, according to ancient Greek sources.

Ancient sources mention the Scythians as a cruel and sadistic people, who had a number of bizarre customs. They showed the enemy no mercy in battle. Storming their enemies, they decimated them with iron swords, battle-axes, spears, and barbed arrows that tore flesh. Later, they used the skulls of their victims as drinking cups.

The Scythians practiced witchcraft and shamanism and worshiped fire and a mother goddess. They regarded the tomb as a dwelling for the dead. Slaves and animals were sacrificed for the dead master’s use. Treasure and household retainers supposedly accompanied chieftains into the “next world.”

In one royal tomb, five servants were found lying with their feet toward the master, ready to rise and resume their duties. Rulers were buried with lavish offerings, and during periods of mourning, the Scythians spilled their blood and cut off their hair.

Herodotus wrote: “They cut off a part of their ears, shave their heads, make cuts round their arms, tear their foreheads and noses, and pierce their left hands with arrows.” In contrast, God’s Law to the Israelites of the same era commanded: “You must not make cuts in your flesh for a deceased soul.”- Leviticus 19:28.

The Scythians also left behind thousands of kurgans (burial mounds). Many ornaments found in the kurgans depict everyday Scythian life.

Russian Czar Peter the Great began to collect such items in 1715, and these glittering objects can now be seen in museums in Russia and Ukraine.

This “animal art” includes horses, eagles, falcons, cats, panthers, elk, deer, bird-griffins, and lion-griffins (mythological creatures having the winged or wingless body of one animal and the head of another). They left behind thousands of pieces of fine and extremely rich jewelry, usually made from combinations of gold, turquoise and lapis-lazuli.

At Colossians 3:11, we read: “There is neither Greek nor Jew, circumcision nor uncircumcision, foreigner, Scythian, slave, freeman, but Christ is all things and in all.”

When the Christian apostle Paul wrote those words, the Greek term rendered “Scythian” implied, not a specific nation, but the worst of uncivilized people.

Some archaeologists believe that the name Ashkenaz found at Jeremiah 51:27 is the equivalent of the Assyrian Ashguzai, a term that was applied to the Scythians.
Cuneiform tablets cite an alliance between these people and the Mannai in a revolt against Assyria in the seventh century B.C. Just before Jeremiah began to prophesy, the Scythians harmlessly passed by the land of Judah on their way to and from Egypt. Hence, many who had heard him foretell an assault on Judah from the north may have questioned the accuracy of his prophecy.- Jeremiah 1:13-15.

The vanishing of the Scythians remains an unsolved ancient mystery.

We have to remember that full knowledge of any ancient people’s origins is almost always clouded by the mists of time.

On This Day In History: Foundation Stone Of The Royal Greenwich Observatory In London Was Laid – On August 10, 1675