MessageToEagle.com – In 1998, an intriguing discovery of thirteen stone stelae was made in Hakkari by a local resident.

Hakkâri (also called Julemerg) is a city and capital of the Hakkâri province in the Turkish region of Kurdistan. The city is located roughly 200 km southeast of Van, another Kurdish city, in the southeastern most corner of Turkey, close to the borders with Syria and Iraqi Kurdistan.

Through its entire history, Hakkari has been continuously ruled by various civilizations like Urartians, Medes, Persians, Romans, Byzantines, Seljuks and many more.

Scholars suggest that this particular region of Eastern Anatolia, was once occupied by an Iron Age Kingdom of Hubushkia, which was centered on the headwaters of the Great Zap River, that goes through the Hakkari Province in Eastern Anatolia, Turkey.

However, the exact location of this independent kingdom is unknown.

The kingdom is mentioned in the Assyrian annals of the tenth and ninth centuries BC., when the Assyrian expeditions crossed the territory of Hubushkia many times, which was under the Urartian and Assyrian influence as well.

Disputed by Assyria and the kingdom of Urartu, Hubushkia eventually lost its independence.

The artifacts, which are now on display in Van Museum, were discovered accidentally by a local resident of the south-eastern Turkish town of Hakkari, at the base of a steep crag crowned by an Ottoman castle.

It has been proposed by scholars that these stone stelae were erected to venerate the dead. They could be tombstones depicting warriors or other important people that lived in the Kingdom of Hubushkia.

The fascinating cut stone figures are hewn in high relief and vary in size from 70 cm to 3.1 m.

Mysterious Lost Kingdom Of Urartu And Its Enigmatic History

Helmet Of Meskalamdug – Sumerian King Of The First Dynasty Of Ur

They portray human figures in cluttered compositions, amidst an array of  motifs and objects – weapons, other human figures, reptiles, deer, snakes and other wild animals. The figures are mostly men (only two stelae contain female figures without arms), are shown front-on, and stare emotionlessly with round penetrating eyes at the observer. 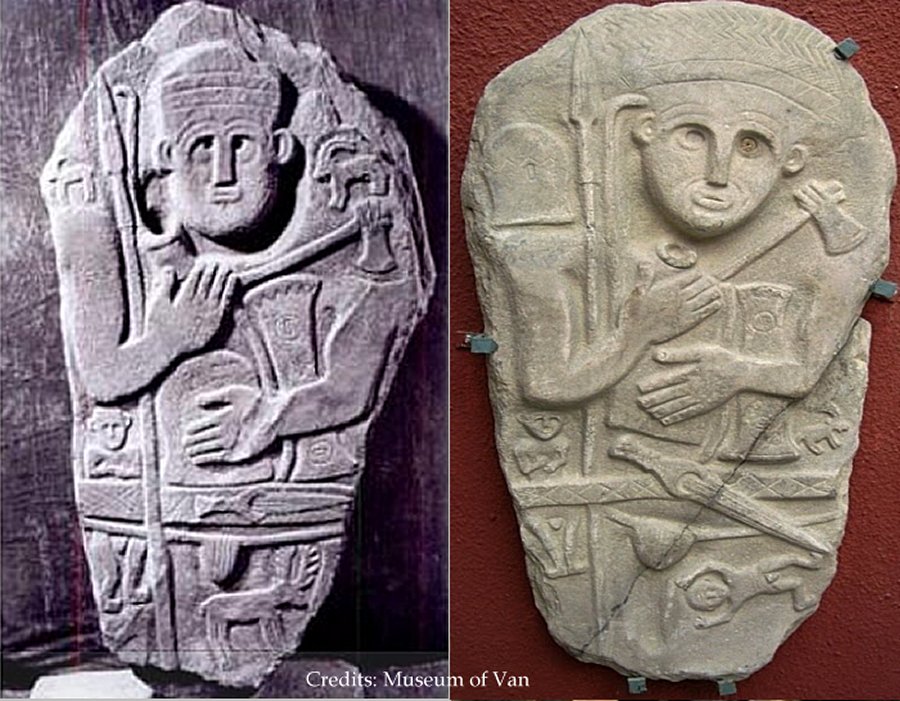 They have long noses and small, closed mouth and around each of their waists is a belt from which hangs a dagger.

Most of these enigmatic figures wear a cap  and in their hands they hold tightly an object.

It has been suggested that these anonymous stelae were carved by ancient people who inhabited Hubushkia.

These types of stelae had never been previously discovered in Eastern Anatolia, and were dated back to the fifteenth century BC.