Ellen Lloyd – MessageToEagle.com – All across the world we encounter mysterious ancient monuments, buildings, structures or artifacts and one such intriguing structure can be found in India.

Today, this enigmatic giant stone is simply called Krishna’s Butter Ball, its original name is Vaan Irai Kal”. In Tamil language, the original language of the land, it means “Stone of The Sky God”.

The colossal boulder is located in in Mamallapuram, India on a hill slope near the Ganesh Ratha.

What makes the rock so interesting is not only its size, but mainly the fact that it defies all known laws of physics!

Krishna’s Butter Ball has become a popular tourist attraction visited by people by thousands of people every year. Both children and adults are eager to see this mysterious rock that just can not be moved by any means. The rock is about five meters in diameter and is perilously resting at an angle of 45 degrees.

It weighs over 250 tons and miraculously stands on an extremely small, slippery area of a hill. In many ways, Krishna’s Butter Ball still reminds that our understanding of history is very incomplete. There has been a lot of debate how this enormous rock which most consider to be a natural formation ended up on the hill.

So far, it has proved to be totally impossible to move the boulder. 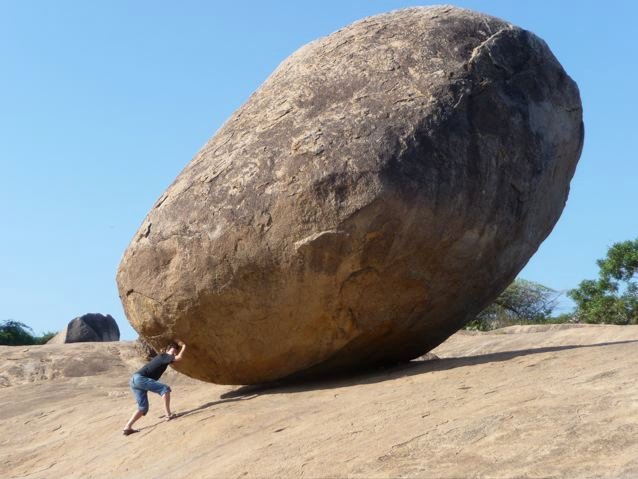 Several attempts to move the rock have been made, but none of them has been successful.

According to an ancient myth, the Pallava King Narasimhavarman who ruled South India from 630-668 C.E. tried to remove the rock.

He gave specific order that the rock which was considered to be from the heavens must never be touched. However, a frustrated Narasimhavarman was forced to watch that his orders could not be carried out. Despite all efforts, the rock simply did not move. 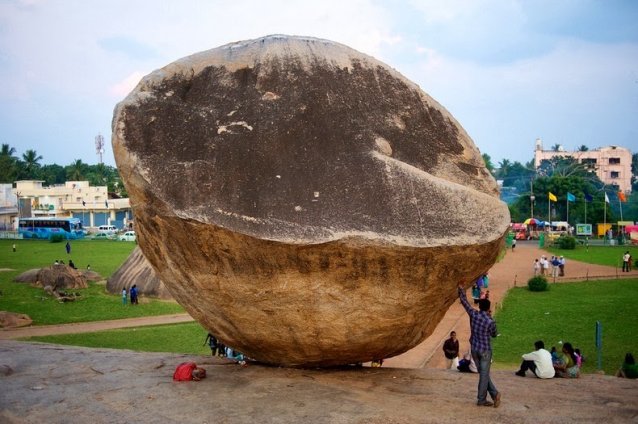 The other side of the rock.

In 1908, Arthur Lawley who was the Governor of Madras, considered the boulder to be too dangerous to have around. Fearing that it would slide of the hill at any time, he ordered it to be moved with help of seven elephants.

However, the rock did not move an inch and the Indian government gave up leaving Krishna’s Butter Ball where it is now.

Don’t worry, it won’t roll. All attempts to move the boulder have failed.

How does a 250 ton rock stand on less than 4 feet base? If it was impossible to push this rock downhill, how was it pushed up the hill?

I will leave you to ponder these questions and the fact that this mysterious rock defies the laws physics.