MessageToEagle.com – The enigma of streetlight interference (SLI) has been recorded in various parts of the world. Many people say they are able to turn off the streetlights just by walking under them.

Is this an explainable electrical phenomenon or the product of unknown energies?

How can we explain that a street lamp nearest a particular person suddenly blinks out, turning on again as soon as the person passed it.

If it happened once, we could easily explain it as a coincidence, but if it occurs over and over again just to that particular person then it is an enigma.
The true reason why some people cause streetlight interference remains a mystery. The opinions vary and it is an interesting subject worthy to explore in more detail.

Late Fortean writer and researcher Hilary Evens was prior to his death in 2011, the foremost authority on SLI.

“SLIder” is the term he coined to refer to someone who reports a SLI experience.

After receiving numerous reports from people claiming that street lamps respond to their presence in an inexplicable way, Evans decided to investigate the enigma.

He collected hundreds of accounts of SLI and presented the result of his research in his book SLIders: The Enigma of Streetlight Interference.
In his book, Hilary Evens writes: “History demonstrates that there can be widespread belief in a phenomenon which is nonetheless nothing more than an artifact derived from an erroneous interpretation of witness testimony.

However, SLI has a basis in physical reality which is amenable to investigation: street lights are physical objects and the SLI effect, if it exists, must be ultimately a physical process. By its nature, SLI lends itself to methodical observation and controlled testing.”

“Frankly, when I first heard of SLI I considered it largely insignificant and boring, regardless of whether or not the phenomenon had a paranormal basis.

I hastily concluded that most, if not all, SLI experiences could be accounted for as a result of people perceiving connections that have no basis in reality. For, as everybody knows, street lamps can and do malfunction from time to time, and people are bound to walk past them at the moment these malfunctions occur.

After taking a deeper look at the phenomenon, however, I came to the unavoidable conclusion that we’re dealing with a genuine mystery – and, what’s more, an important and fascinating one. If true… claims [of SLI] carry profound and exciting implications for science and for our knowledge of human potential, ” Evens wrote in his book explaining his own attitude and take on the subject.

SLIders are often treated with great skepticism and yet they are told that there is no sufficient explanation for the phenomenon they experience. 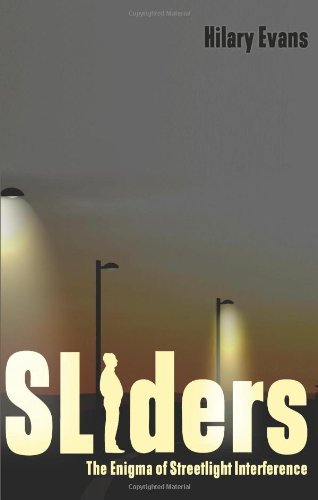 How Do They Do That? A young man of Dublin walks past a row of streetlights at night–and they go out, one by one, as he passes.

An engineer in Woodville, Washington, is stopped by police and his car searched to find out what he’s doing to their streetlights.

An Australian in the entertainment industry parks his car in a parking lot, and the light above him goes out-until the following evening when he parks in precisely the same space and the light comes on again. And that’s not all. When a guest in a restaurant in Athens, Greece, asks that the music be turned down, they refuse–whereupon she “kills” the restaurant’s electricity and they eat the rest of their meal by candlelight. Other people affect traffic lights, computers, railway crossings… This is Street Light Interference (SLI). Once considered to be folklore–something that happened to a friend of a friend–today it is recognized as a scientific enigma with implications for our knowledge of the universe, including ourselves. In this, the first full-length book on SLI, we hear from some of the hundreds of SLIders who have reported their uncanny experiences, and consider the wider implications of this fascinating phenomenon. Read more here:

Evens describers plenty of stories reported to him by people who experienced streetlight interference.

“It occurred to me that the ones I zap are all on light-sensing switches, and perhaps my energy at certain times for who knows what or why, is the right kind and strength to trick the switch into thinking it is daytime,” explains one individual who considers himself to be a SLIder

Richard M, says he became aware of his SLI ability as a teenager. He recalls “lights were going out when we walked under them and then flickering back on when we had passed. It didn’t frighten me but I became conscious of it. I remember walking under them trying to make them go out but I couldn’t.

Mysterious Shadow People – Are They Alien Entities, Time Travelers Or Interdimensional Beings On A Mission?

Mystery Of The Black-Eyed People – Why Are They So Different From The Rest Of Us?

Strange And Unexplained Mysteries
The moment I stopped willing it to happen, it would start again – like someone catching me out. I sort of anticipated it for a while and didn’t really tell anyone about it. A few years ago, I noticed it happening again – the first time for a long time.

Again, I was with my dog and this time we turned out a number of lights in a car park across the road. I told a close friend when I got home and he came out to watch from the other side of the road. As we walked around the park, they all went out as we passed under them, and then came back on when we had moved away… I seem to recall that both periods coincided with stress, some of it quite intense.”

Some skeptics suggest that SLI occurs as a consequence of lights near the end of their life, but the intermittent illumination of aging streetlights does not resolve many of the cases of SLI.

“These appliances need not be street lights, of course: and the reports we have of persons affecting computers, supermarket check-outs, etc. can be seen as providing confirmatory testimony to this. However, there is good reason to think that street lights are particularly sensitive compared with other types of equipment: this could be because they operate at close to the critical level, or because it is not normally considered necessary to provide them with substantial shielding,” Evens writes.

Those who treat SLI as a true phenomenon believe that certain people possess a level of energy that interacts with the streetlights or electrical equipment and this energy causes lights to go on and off.

According to Evens’ theory a “force” at work in SLI operates by affecting the voltage of the current, most likely by causing a surge in voltage that triggers the lamp’s internal cut off switch.
“To perform this feat,” he speculates, “SLI would have to be an electro-dynamic force, somehow generated within or through the human biological system, and somehow externalised into the neighbouring environment, where it will act on any appliance which happens to be vulnerable.”

It should be added that the majority of SLI cases happen while people walk. However there , are also those who say it occurs while riding on bicycles, motorbikes, or even the bus.

SLIders also often experience problems with compasses or clocks, causing them to stop or malfunction.

First version of this article was originally published on 24 August, 2013