MessageToEagle.com – The Maya Blue has been a scientific puzzle mainly due to its unusual chemical composition. Maya blue is an extremely resistant artificial pigment. Despite time and the harsh weathering conditions, paintings colored by Maya blue have not faded over time. However, the blue pigment could be destroyed using very intense acid treatment under reflux.

The Maya Blue (azul maya in Spanish) has been discovered at several architectural locations from the ancient Mayan civilization including the archaeological site of Cacaxtla on the Mural de la batalla.

This pigment was named Maya blue because it was thought that existed only in the Maya area of Yucatan. Today, it is known that there are murals with Maya Blue in various parts of Mesoamerica, as in the Tajin, Tamuín, Cacaxtla, Tenochtitlan (Templo Mayor), Zaachila, Tula and other parts of Central America. The pigment has also been found on palace walls, ceramics, codices, sculptures and even the bodies of human sacrifices.

Maya blue first appeared around 800, and it was still used in the 16th century. 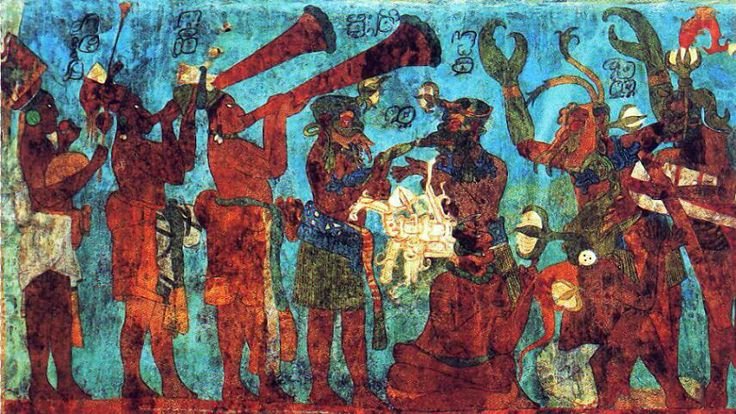 The recipe and process for preparing Maya Blue, a highly-resistant pigment used for centuries in Mesoamerica, were lost.

Scientists have long known the two chief ingredients of the intense blue pigment: indigo, a plant dye that’s used today to color denim; and palygorskite, a type of clay. However, how the ancient Maya produced unfading paint remained a mystery.

History of the Maya blue began in 1931, when scientists analyzed a bluish substance that was found in the exploration of the Temple of the Warriors in Chichén Itzá (Yucatan). Since then, scientists from different countries have dedicated their efforts to unlock the secrets possessing this compound.

Some years ago, a group of scientists from the University of Valencia in Spain discovered traces of another pigment in Maya Blue. It could possible solve the Maya Blue mystery. “We detected a second pigment in the samples, dehydroindigo, which must have formed through oxidation of the indigo when it underwent exposure to the heat that is required to prepare Maya Blue,” Antonio Doménech, a researcher from the University of Valencia, said.

“Indigo is blue and dehydroindigo is yellow, therefore the presence of both pigments in variable proportions would justify the more or less greenish tone of Maya Blue,” Doménech explained. “It is possible that the Maya knew how to obtain the desired hue by varying the preparation temperature, for example heating the mixture for more or less time or adding more of less wood to the fire.”

In 2008, American scientists claimed that copal resin, which was used for incense, may have been the third secret ingredient for Maya Blue. Their research was based on a study of a bowl that had traces of the pigment and was used to burn incense. However, Doménech remains skeptical and remarked that the bowl contained Maya Blue mixed with copal incense, so the simplified conclusion was that it was only prepared by warming incense.

The chemical composition remains unknown, at least for now. Blue pigment was also used in ancient Egypt. The Egyptian blue is the world’s oldest artificial pigment. It appeared about 5,000 years ago in a tomb painting dated to the reign of Ka-sen, the last king of Egypt’s First Dynasty.

Scientists have discovered that the Egyptian blue pigment has extraordinary properties and will enable us not only to reconstruct the past, but also possibly to shape the technological future.

The material giving Egyptian blue its color is calcium copper silicate. It was made by grinding sand, lime and copper (or copper ore) and heating the mixture in a furnace.

Could the answer to the secret ingredient for Maya Blue be hidden in the composition of the ancient Egyptian blue pigment?

Ancient Egyptians used the blue pigment in paintings, such as in wall paintings, tombs, mummies’ coffins and ceramics.