Cynthia McKanzie – MessageToEagle.com – Scientists have found rare evidence preserved in the chemistry of ancient rocks from Greenland which tells of a time when Earth was almost entirely molten.

The study, published in the journal Science Advances, yields information on an important period in our planet’s formation when a deep-sea of incandescent magma stretched across Earth’s surface and extended hundreds of kilometers into its interior. 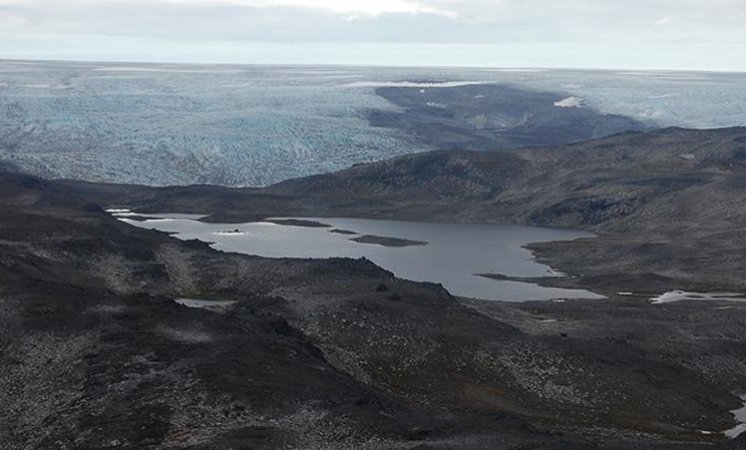 It is the gradual cooling and crystallization of this ‘magma ocean’ that set the chemistry of Earth’s interior – a defining stage in the assembly of our planet’s structure and the formation of our early atmosphere.

Scientists know that catastrophic impacts during the formation of the Earth and Moon would have generated enough energy to melt our planet’s interior. But we don’t know much about this distant and fiery phase of Earth’s history because tectonic processes have recycled almost all rocks older than 4 billion years.

Now researchers have found the chemical remnants of the magma ocean in 3.6-billion-year-old rocks from southwestern Greenland.

The findings support the long-held theory that Earth was once almost entirely molten and provide a window into a time when the planet started to solidify and develop the chemistry that now governs its internal structure. The research suggests that other rocks on Earth’s surface may also preserve evidence of ancient magma oceans.

“There are few opportunities to get geological constraints on the events in the first billion years of Earth’s history. It’s astonishing that we can even hold these rocks in our hands – let alone get so much detail about the early history of our planet,” said lead author Dr. Helen Williams, from Cambridge’s Department of Earth Sciences.

The study brings forensic chemical analysis together with thermodynamic modeling in search of the primeval origins of the Greenland rocks, and how they got to the surface.

At first glance, the rocks that makeup Greenland’s Isua supracrustal belt look just like any modern basalt you’d find on the seafloor. But this outcrop, which was first described in the 1960s, is the oldest exposure of rocks on Earth. It is known to contain the earliest evidence of microbial life and plate tectonics.

The new research shows that the Isua rocks also preserve rare evidence which even predates plate tectonics – the residues of some of the crystals left behind as that magma ocean cooled.

“It was a combination of some new chemical analyses we did and the previously published data that flagged to us that the Isua rocks might contain traces of ancient material. The hafnium and neodymium isotopes were really tantalizing because those isotope systems are very hard to modify – so we had to look at their chemistry in more detail,” said co-author Dr. Hanika Rizo, from Carleton University.

Iron isotopic systematics confirmed to Williams and the team that the Isua rocks were derived from parts of the Earth’s interior that formed as a consequence of magma ocean crystallization.

Most of this primeval rock has been mixed up by convection in the mantle, but scientists think that some isolated zones deep at the mantle-core boundary – ancient crystal graveyards – may have remained undisturbed for billions of years.

It’s the relics of these crystal graveyards that Williams and her colleagues observed in the Isua rock chemistry. “Those samples with the iron fingerprint also have a tungsten anomaly – a signature of Earth’s formation – which makes us think that their origin can be traced back to these primeval crystals,” said Williams.

But how did these signals from the deep mantle find their way up to the surface? Their isotopic makeup shows they were not just funnelled up from melting at the core-mantle boundary. Their journey was more circuitous, involving several stages of crystallization and remelting – a kind of distillation process. The mix of ancient crystals and magma would have first migrated to the upper mantle, where it was churned up to create a ‘marble cake’ of rocks from different depths. Later melting of that hybrid of rocks is what produced the magma which fed this part of Greenland.

The team’s findings suggest that modern hotspot volcanoes, which are thought to have formed relatively recently, may actually be influenced by ancient processes.

“The geochemical signals we report in the Greenland rocks bear similarities to rocks erupted from hotspot volcanoes like Hawaii – something we are interested in is whether they might also be tapping into the depths and accessing regions of the interior usually beyond our reach,” said Dr. Oliver Shorttle who is jointly based at Cambridge’s Department of Earth Sciences and Institute of Astronomy.

The team’s findings came out of a project funded by Deep Volatiles, a NERC-funded 5-year research program. They now plan to continue their quest to understand the magma ocean by widening their search for clues in ancient rocks and experimentally modeling isotopic fractionation in the lower mantle.

“We’ve been able to unpick what one part of our planet’s interior was doing billions of years ago, but to fill in the picture further we must keep searching for more chemical clues in ancient rocks,” said co-author Dr. Simon Matthews from the University of Iceland.

Scientists have often been reluctant to look for chemical evidence of these ancient events. “The evidence is often altered by the course of time. But the fact we found what we did suggests that the chemistry of other ancient rocks may yield further insights into the Earth’s formation and evolution – and that’s immensely exciting,” said Williams.

The study was published in Science Advances.