MessageToEagle.com – Ornaments in the shape of beetles are known from the late Paleolithic epoch (10,000 to 20,000 years ago). However, so much earlier than the Egyptian civilization, it is difficult to know the exact meaning these people attributed to beetle body ornaments.

Scarab is one of the oldest and widely used symbols of the ancient Egyptians. Egyptian pharaohs worshipped dung beetles and most probably it was symbolically as sacred to the Egyptians as the cross is to Christians.

The scarabs with aesthetic qualities and shamanic symbolism, were already known in the Old Kingdom (3rd millennium BC) and played an important role in the early worship of animals. It is supported by archaeological evidence discovered in graves during the time of King Den of Dynasty I. 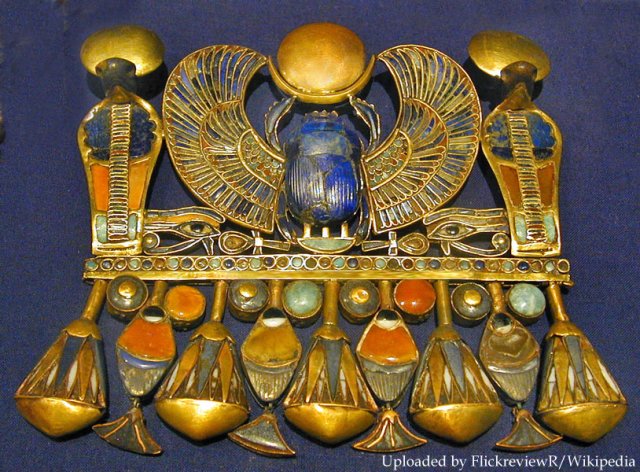 Winged scarab of Tutankhamun with semi-precious stones. This pectoral is composed of Tut’s Prenomen name: “NebKheperU-Ra”, the hieroglyphs of: Basket, Scarab-(in Plural-strokes), and Re.

Sir W. M. Finders Petrie in Scarabs and cylinders with names writes that many different kinds of beetle were sacred and venerated in ancient Egypt as showed by many jars, found in graves containing numerous dried beetles, both large and small and many amulets, especially in the form of large sacred Scarabeus sacer.

Particularly well-known is an amulet depicting ‘the sun – the big ball rolled across the heaven by the Creator, and… the scarab is an emblem of the Creator, Khepera…’ or the sun god Khepri (Kheper), in the mythology of ancient Egypt, ‘the Father of the Gods’ and this symbolism of the beetle is a part of the primaeval animal worship of ancient Egypt.

The ‘Kheper’ is ‘being’ and it means existence, creation or becoming and so, the god Khepera is the self-existent creator god.’ 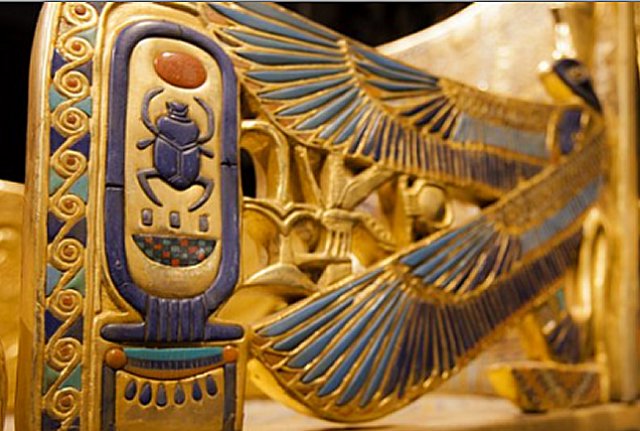 The scarab was depicted with the disc of Ra in its claws in 12th, 18th and later dynasties and associated with other gods as a creative emblem.

Millions of amulets and stamp seals of stone or faience were fashioned in Egypt with depictions of the scarab beetle and this tradition survived well beyond the dynastic periods.

‘On the passing to the 23rd dynasty and later the winged scarab were placed on the breast of the mummies, as the emblem of the Creator, who will transform the dead, and from the 26th to the 30th dynasties, many scarabs were placed on the mummy, usually a row of half a dozen or more along with the figures of the gods.’ (W.M.F.Petrie)

In Roman times, there were various kinds of beetles and the Greeks adopted the carved stone columns, which seems to confirm the importance of the sacred temples of the Egyptian scarabs:

“I am Cheprer, a student and when I spread wings, back to life.” 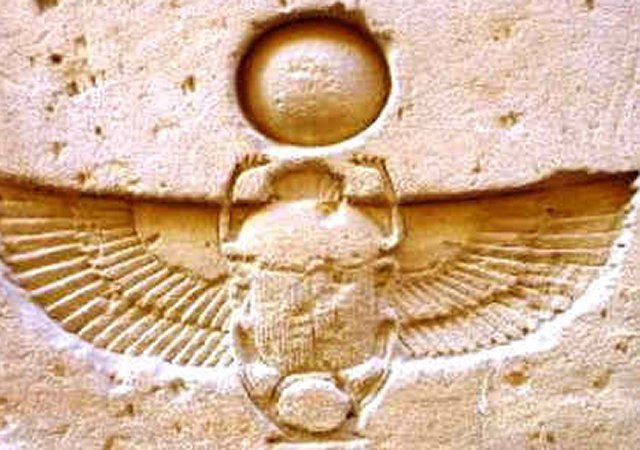 The sacred ‘Chilam Balam’ books written by the Maya describe the scarab as a dirt ground, in terms of material and moral, which is destined to become a saint and in China, we find the same symbolic interpretation in ‘the scarab rolls its ball, which is called by life.’

‘The scarabaeus rolls his ball and in the ball there develops life as the result of the undivided effort of his spiritual concentration. If now an embryo can grow in manure, and shed its shells, why then should not the dwelling place of our heavenly heart also be able to create a body if we concentrate the spirit upon it..? we read in the ‘The Secret of the Golden Flower’ – A Chinese Book of Life, translated in 1931).

Scene from the Chapel of Sokar-Osiris in the Temple of Hathor at Nitentòre (“Jwnt-t3-N?rt”, Dendera): from left to right.

The famous text of “The Secret of the Golden Flower,” takes the sacred scarab as an example of the “work to be done” in order to reach spiritual immortality, either material (for the body), or spiritual (for the soul). 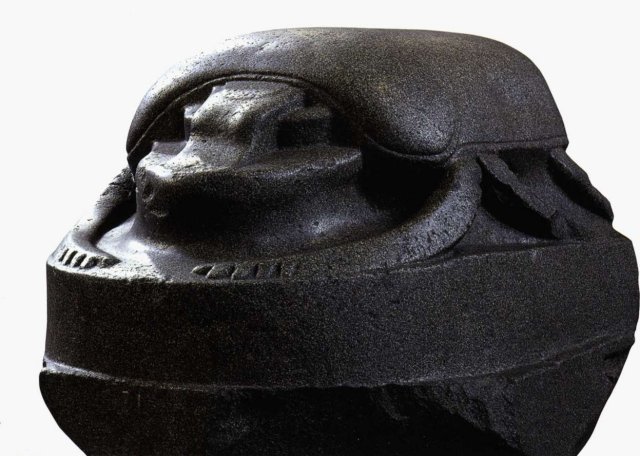 This is a giant sculpture of a scarab beetle. It is around one and a half meters long and is one of the largest known representations of a scarab beetle. This scarab is thought to be from the Ptolemaic period (305-30 BC) but could be earlier. It may once have stood in an Egyptian temple but it was found in Constantinople (modern Istanbul) in Turkey. It may have been taken from Egypt to Constantinople when the city became the capital of the Later Roman empire in AD 330. Image credit: British Museum.

It is a goal of the Taoism philosophy, which believes in the strengths of various material “pellets” that aids in reaching immortality.

The scarab dung ball was identified as one of these important ‘pellet substances’.

Many beetle species have been and still are used as food in America, Australasia, Asia, and Africa; some were also eaten in Europe. Western civilization through Art Nouveau jewelry of the 1900’s was richly adorned with beetles and other insects.

To this day, especially in Mexico, living specimens of some beetle species are worn by women as broaches, attached with a small gold or bronze chain.

By the way, some say that the scarab worn as a pendant around the neck, can cause disease of the throat and larynx. Or is it only an illusion…?