Ellen Lloyd-  MessageToEagle.com –  This is a hypothetical scenario that should serve as food for thought.

Let’s assume that extraterrestrials do exist, and an advanced alien race is in close vicinity of our planet watching us. They can have probes observing events taking place on the Earth. Let’s also assume these extraterrestrials are very advanced and could help humans solving a variety of problems, like for example finding a cure for Covid-19.

The question is – Should extraterrestrials interfere in human affairs if they can help us?

Do we deserve their compassion and gift of knowledge?

Some will say every sentient being, who possesses adequate means is obliged to help those who require assistance. Empathy makes us human, but why should we assume this is also an extraterrestrial personality trait?

We don’t know anything about alien logic, intelligence or emotions. Many will argue, humanity doesn’t deserve help from extraterrestrial intelligence.

Our history books offer proof we are a violent and destructive race. A quick look at our planet today shows we disrespect other lifeforms and destroy our nature. Perhaps extraterrestrials observe us and think that we don’t deserve to call this beautiful planet our home.

Why Would Extraterrestrials Be Unwilling To Help Humans

If you’re a fan of Star Trek you’ll remember how Seven of Nine described humans in the episode Scorpion.  Seven of Nine said: “When your captain first approached us, we suspected that an agreement with humans would prove impossible to maintain.

You are erratic, conflicted, disorganized. Every decision is debated, every action questioned, every individual entitled to their own small opinion.”

Could this be how extraterrestrials see humanity? Ufologist and former Ministry of Defence UFO investigator Nick Pope warned that humans are totally unprepared for an alien invasion. Who can argue with that? We have successfully demonstrated we are unprepared for a pandemic outbreak, so it’s unlikely our world could handle a superior alien force that has hostile intentions.

“In most science fiction movies extraterrestrials are presented as the bad guys and they are part of a hostile invasion force. For some reason, these highly advanced alien beings travel several light-years with the goal to destroy Earth and humans.

Many of the extraterrestrial invasion scenarios make a good movie plot, but how realistic are they from a scientific point of view?

An astrobiologist has examined five possible extraterrestrial invasion scenarios and his conclusions are more optimistic and show us we shouldn’t be afraid of our alien visitors.” 1

A while back researchers suggested that extraterrestrials are deliberately waiting for the right moment before they reveal themselves to Earthlings.

If aliens wait and hope humans will evolve spiritually, then they may have to wait a very long time.

Returning back to Star Trek, many will remember that the Prime Directive prohibits its members from interfering with the internal and natural development of alien civilizations.

The Prime Directive applies particularly to civilizations which are below a certain threshold of technological, scientific and cultural development. It prevents starship crews from using their superior technology to impose their own values or ideals on them. So, if an advanced alien race wants to help another alien culture it cannot do us without breaking the rules.

Even if many think this way of reasoning is unethical, the Prime Directive is an ethical guideline, for how to treat cultures based on a policy of egalitarianism and trust. It ensures every culture is given the opportunity to develop on its own without interference.

Could extraterrestrial watching us be prohibited in interfering in our development? 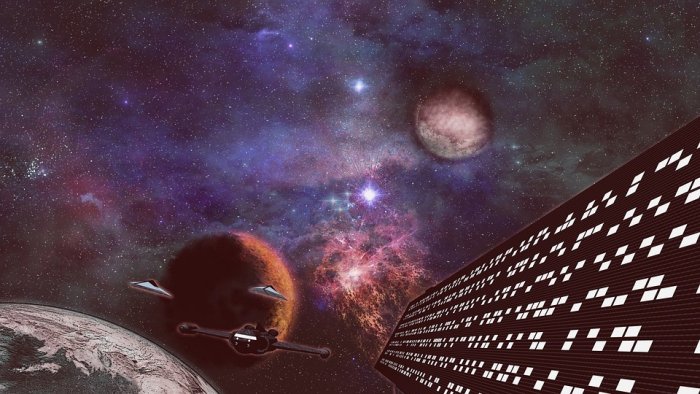 Another possibility is that we have reached a stage when we can apply for membership in the Galactic Club.

According to David Schwartzman, a biogeochemist at Howard University in Washington D.C, aliens are out there, but there are several things we must accomplish before planet Earth can be initiated into the Galactic Club.

“Our world will change completely once we enter the Galactic Club.

I submit that if we want to enter the Galactic Club, the challenge lies in reconstructing our global political economy. A few minor side benefits should result, like no more war, no more poverty, a future for all of humanity’s children with a substantial proportion of biodiversity intact. We should not expect the Galactic Club to save us from ourselves,” Schwartzman said.

Even if extraterrestrials are out there and they’re unwilling to help humanity, it’s still in our best interest to save our planet and do what is right for future generations. Maybe one day in the future humans will explore beautiful, exotic alien worlds, but right now, planet Earth is our home, our only home.