For thousands of years, numerous ancient cultures flourished and disappeared in the Altai region, Siberia. Archaeologists excavating the ancient burial complexes of the Pazyryk culture that existed in the Altai region about 2,500 years ago through the end of 600 BC to the beginning of 200 BC discovered several skulls that offer evidence of sophisticated ancient surgical technologies.

The traces of complex manipulations on human skulls performed by ancient healers indicated that improvement of the human body apparently was an important aspect of the Pazyryk people’s worldview.

The term trepanation is commonly understood as a surgical intervention when a piece of skull bone of a living individual is removed without any damage to the underlying blood vessels, meninges, and brain. “Trepanning” means making a hole and exposing the intra cranial contents of a human skull Trepanation can have medicinal or ritual purposes.

The Pazyryk cranial collection consists of 153 skulls, 3 of which have evidence of intravitam trepanations. These 3 skulls were carefully examined.

One of the male patients had a blood clot from head trauma that most likely caused him to suffer from nausea, headaches, and other symptoms. It’s believed that trepanation was used to remove the clot. The skull shows bone growth after the surgery, meaning the man lived for many years afterward.

The second male skull suggests the surgeon was trying to repair a congenital skull deformity. With both of these men, the surgeons made a small hole where they could get to the brain with minimal damage to the membrane and joints.

The third skull belongs to a woman who showed trauma from a fall. Unfortunately, she did not survive her surgery because her doctor made mistakes.  In ancient times, the choice of surgeon was critical.

The actual scraping tool was not found at the site, but archaeologists suspect it was a bronze knife. 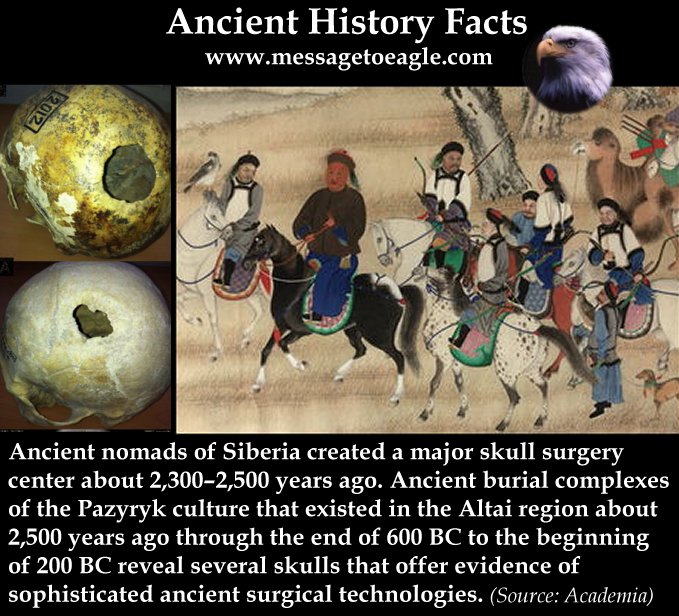