Ellen Lloyd – MessageToEagle.com – Many superstitious people fear that a crack in the giant boulder known as the Hanging Rock in Siberia may unleash an ancient legend linked to the coming world changes.

The Hanging Rock in the Western Sayan Mountains has sat uncomfortably on the edge of a precipice probably since glacial times tens of thousands of years ago but has so far failed to submit to gravity or the efforts of groups of tourists to dislodge it.

A crack has appeared in the giant stone

The impressive stone considered one of the wonders of Siberia has a contact area of only one square meter with the rock-face on which it has rested since being deposited here by an Ice Age glacier which later receded.

Now, local experts say a new crack has appeared which could lead to it falling into the dark waters of Lake Raduzhnoye – the ‘pearl’ of the Yergaki (or Ergaki) National Park is also known as the ‘Russian Yosemite’ in the vast Krasnoyarsk region – literally ‘at any time’.

Evidently, the fissure started to show in 2012, and it could lead to the demise of a natural phenomenon that has intrigued man for thousands of years. If it falls one kilometer, it could have dire consequences according to legends handed down by native groups since ancient times in this part of southern Siberia.

Ancient legend of the giant warrior Sleeping Sayan, the Master of the Taiga

Peace and order are maintained here by age-old warrior Sleeping Sayan, the Master of the Taiga, it is believed. The falling of the rock will signal that this slumbering giant has awoken from an eternal sleep to defend her motherland (Sleeping Sayan is seen as female). The splash from the rock crashing into the lake below will wash this mystical female warrior’s face, and launch a new epoch, with the beginning of new life.

Yet this is not the only legend about Hanging Rock. Another stems from the eerie way the rock vibrates from the wind whistling through the pristine mountain air in its exposed location. Hanging Rock, according to this version, is the beating heart of sleeping Sayan which the gods had removed from her chest. 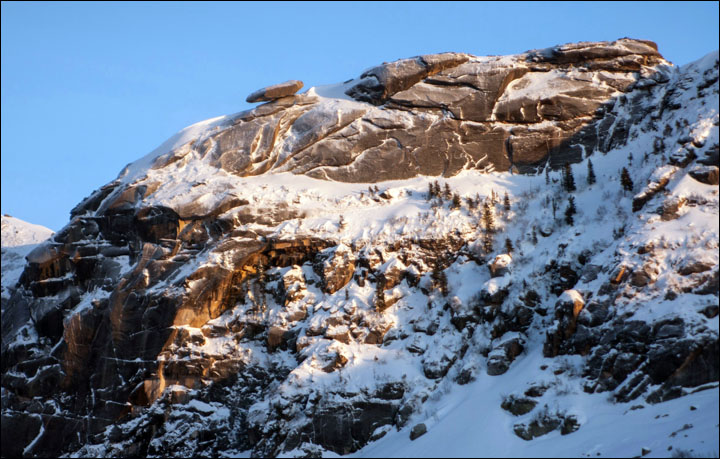 A Tale Of Yakutian Horses: One Of The Fastest Cases Of Adaptation To – 70 Degrees In Siberia

If a man comes along with super-human powers who can lift and dislodge this incongruous stone, then he will replace sleeping warrior Sayan as the keeper of this majestic and unspoiled region. The mystical warrior, in turn, will be finally freed from seemingly endless duties.

It is true that many have tried to push Hanging Rock into a watery grave, including one group of 30 tourists who believed they could sway nature. They all pushed at once, but the coarse-grained granite – hewn from 500 million-year-old rock – didn’t budge. Others boasting Samson-like muscles have also failed – so far – to send Hanging Rock on its way to create a mighty tsunami in the tiny 100-meter diameter lake below.