MessageToEagle.com – The Pawnee – one of the earliest Native American tribes to be described in the historical records. The Skidi Pawnee, or the Wolf Pawnee were not closely bound to the other bands, and might have originated from a different ancestry.

The Skidi Pawnee, who originally inhabited along the Platte River, Loup River and Republican Rivers in present-day Nebraska, were famed for their courage and intelligence.
They put up a brave resistance to the white invaders but eventually abandoned their old customs and adopted new ways. 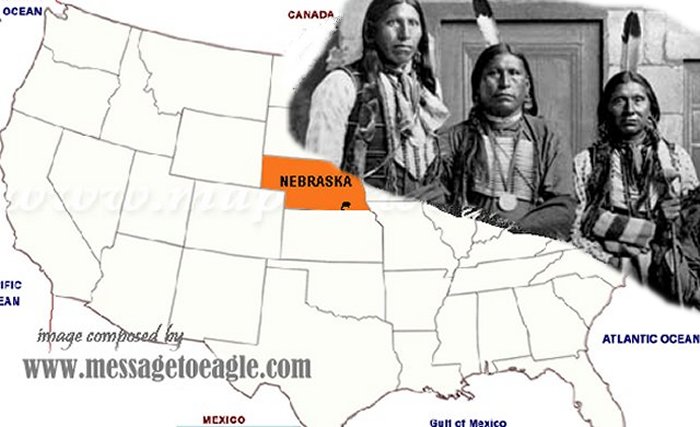 To the south of the Great Plains lived the Pawnee. They spoke one of the Caddoan languages used by their very remote ancestors. They were famed for their courage and intelligence.

Considered as one of the best sky watchers of ancient times, the ancient Pawnee tribes were especially interested in the gods of the sky. Among them, there were astronomers who watched the movements of the planets and particularly venerated the North Star as a beneficent creator god, and went in strong fear of the magical South Star, a force of opposition belonging to the underworld.

They fully trusted the stars regarding various important events which supposedly could take place and their most sacred ceremonies were tied to the stars.

The stars were the Pawnee’s true timekeeper, indeed. These people possessed a true understanding of the movement of stars and their life from the beginning to the end was focused on the star positions in the sky. The stars served not only as a calendar for the Pawnee, they developed complex star ceremonies and rituals. 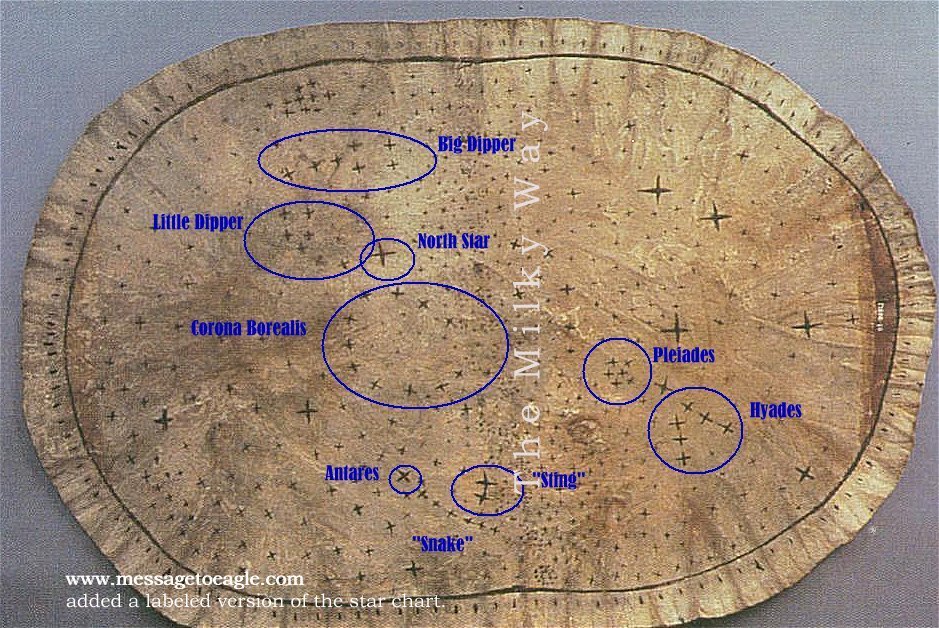 Their celestial religion was of the most sophisticated kind yet recorded for a North American culture.

They were familiar with meteorites, had own sky observation methods and followed the tracks of the sun, moon, and the five planets. They deeply believed that they were once born of the stars and were able to map their favored stars on buckskin.

However, the Skidi Pawnee sky map gives no indication of the importance of the Path of the Sun, the Ecliptic or the summer solstice. Also they did not bother to develop any precise lunar calendar. Most ancient cultures including other North American Indian tribes, had calendars calculated with the summer solstice or the Moon or even lunisolar, but the Pawnee were the star people of the Plains and concentrated their attention on stars.

This Skidi star chart (image below) is of unknown age. The buckskin chart depict some particularly important stars that guided the Skidi Pawnee in their lives.

Chamberlain, Von Del wrote in his book “When Stars Came Down To Earth”, that “the Skidi saw a sky of glorious beauty … their Spirit Path, the Milky Way, loomed overhead in brilliant splendor”. 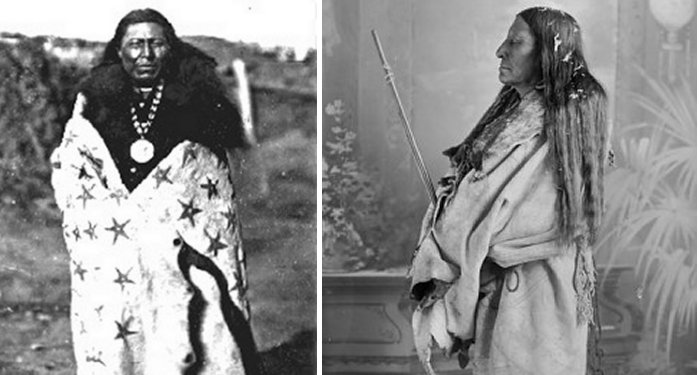 Skidi Pawnee worshipped the Pleiades cluster and the North Star was considered to be a chief protecting people and all stars in the sky. Pawnee believed that the stars were gods that “interacted with humans.”

According to the Pawnee’s beautiful but rather complicated cosmological myth explaining the creation of the universe, “The Red Morning Star” and the “Evening Star” had a daughter who gave birth to the first humans and so the human race appeared on earth, “the union of Mars and Venus created the first woman and the overlapping of the sun and the moon created the first man”.

Their small houses and villages were built on constellation patterns observed with the naked eye in the night sky. Skidi Pawnee perception of the stars had strong effects on village planning and building of their houses (lodges). The doors of the lodges always faced east to the rising sun. A common feature of those lodges were the four painted poles which represented the four important semi-cardinal directions NE, NW, SW, and SE were used to hold up the structure.

The Pawnee believed that the sky was supported by the star gods who dwelled at NE, NW, SW, and SE. Also gods of the four directions – N, S, E, W were of great importance. 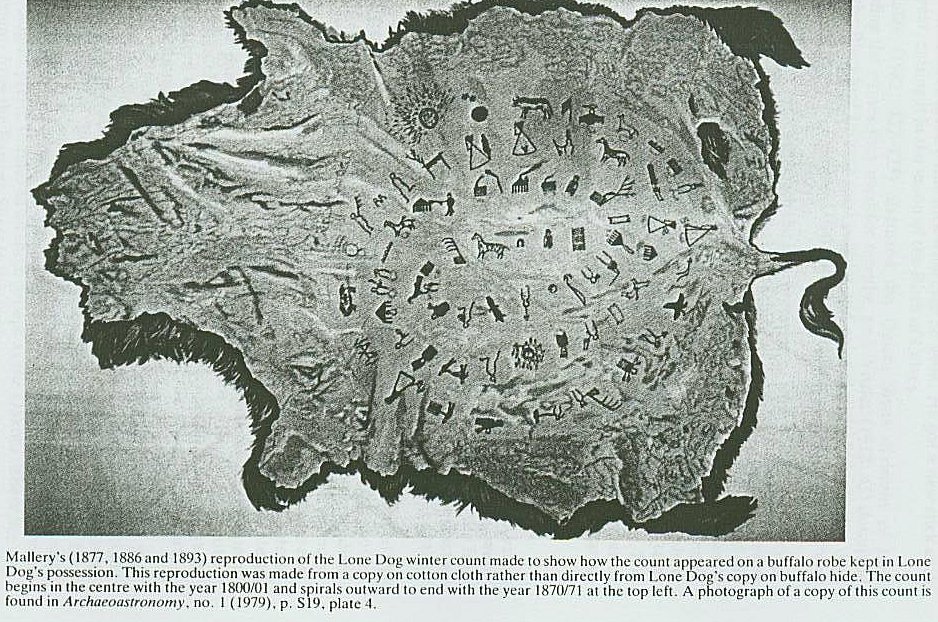 The earth lodge served as an astronomical observatory. The priests sat inside at the west of the lodge. From there they could observe the stars in certain positions through the long east-oriented entrance. Similar observations were conducted through the smokehole of the lodge which was the zenith, the abode of the center, Tirawa.

The order and position of the stars were observed by careful watching of the horizon after sunset and just before dawn. The Pawnee earthlodges and the villages were a symbol of their cultural identity, their world. People’s belongings were decorated with sky symbols. The lodge and village defined and symbolized the Pawnees’ world and they evidenced of the Pawnees’ architectural sophistication.

The earthlodge was also built for astronomical observations of stars and their worship and possessed a sacred star bundle, which demonstrated the direct link between the villages and the astral gods.

Through both the historical and archaeological record, it is clear that the Pawnee lifestyle was focused, on the observation of the celestial bodies. The positions and a way of construction of their lodges placed their daily life in the center of the universe. They could observe the universe and follow the sky patterns.

In one corner of the village was a shrine devoted to the morning star (Venus), and in the west was another shrine to the evening star (also Venus). The Pawnee’s intensive ritual life took place at those shrines dedicated to the night sky.

In each of these households a sacred bundle could be found, these bundles were believed to be gifts from the star gods and contained star charts made of leather.

The stars were represented in four-pointed figures. One side of the chart was a brownish-yellow and the other side a reddish-brown.

The Milky Way was depicted in the center of the chart and symbolized the division between winter and summer.

The Pawnee believed that when the end was coming they would be warned by the moon changing to a dark color and then to black.
One day that the the cataclysm was to take place the sun would become dim quite quickly and then suddenly all would be dark, much darker than in an eclipse…

Von Del Chamberlain, ‘When Stars Came Down To Earth: Cosmology Of The Skidi Pawnee Indians Of North America’