Ellen Lloyd – MessageToEagle.com – Did the inhabitants of Britain once in the remote past share the land together with huge extinct animals? Fossils of ancient, long-vanished beasts like the mammoth and the rhinoceros, destroyed by a universal catastrophe have been discovered next to skulls and skeletons of prehistoric humans in various countries around the world, including the United Kingdom.

Man is of greater antiquity than modern science is willing to admit. Elephants and tigers did once occupy the soil of Britain. There is a lot of evidence clearly supporting this claim.
In my book Voices from Legendary Times I write among many things about the existence of prehistoric animals and humans in America, but in this article we will take a brief look at some of the often forgotten, yet very significant discoveries in the United Kingdom.

In 1715, a London pharmacist named Conyers made the first known finding, which proved that the antediluvian man could also be traced back to England.

In Gray’s Inn Lane, Conyers dug up a stone axe that was lying next to elephant bones. Based on his discovery, Conyers logically concluded that the ancient man had once used stone tools to hunt elephants.

In 1790, John Frere, conducted archaeological excavation at Hoxne in Suffolk, England, where he found “thunderstones”- hand axes of flint lying beside huge bones of unknown animals. There was still a teeth remaining in the enormous animal jawbone that Frere found at a depth of twelve feet, in a layer of gravel. Frere reached the same conclusion as Conyers – the fossils and human tools were evidence of that man and extinct animals did coexist in the past.

However, the scientists were of a different opinion. Frere was of course met with nothing but scorn by the world of science. His findings were not in accordance with the historically accepted timeframe of mankind, therefore his ideas and discoveries could not be seriously treated and the case was closed.

Later in 1824, a Roman Catholic Priest named Father J. MacEnery, unearthed human tools together with bones of extinct animals in Kent’s Cavern, Devon, England. Father J. MacEnery told William Buckland, an English theologian and Dean of Westminster about his unusual finding. William Buckland made a very interesting cave discovery himself at Goat’s Hole Cave near Paviland in Wales, where he found a skeleton of a young man. Buckland misidentified the remains, believing that he had unearthed the remains of a woman. He named her the “Red Lady of Paviland”. Additionally, Buckland came across ancient stone tools next to the skeleton.
According to the religious doctrine, Man before Adam was an impossibility. Adam was the first Man created by God. Buckland concluded therefore that his discovery along with Father J. MacEnery’s dated back to the time of Jesus Christ.

So, how could the ancient tools end up mixed with the bones of prehistoric animals? William Buckland had an answer to this question – the tools must have somehow “slipped down” to the lower, older layer were the remains of extinct animals were found.

Some years later another curious cave finding was brought to light in Devon. In 1858, when entering a cave in Devon, William Pengelly, a schoolmaster discovered on its floor a sheet of stalagmite from three to eight inches thick having within it and on it relics of lion, hyena, bear, mammoth, rhinoceros and reindeer.
This was yet more proof of that history is different than presented in orthodox history books.

One of the most astonishing artifacts discovered in England is undoubtedly a little hammer, which is estimated to be 140 million years old.

At first sight, this tool appears rather insignificant. However, this antediluvian relic is unique in many ways. According to modern science this hammer should not exist because a tool of this particular kind is impossible to manufacture! Yet, it is there. Someone did produce this hammer, millions of years ago!
Examinations of the hammer conducted by independent organizations revealed that this tool consists of 96.6 % iron, 2.6 % chlorine, and 0.74 % sulphur. The hammer is almost entirely made of iron. Further examination of the hammer showed no evidence of inclusions or irregularities in the hammerhead steel. There are no traces of ingredients used for refinement such as copper, titanium, manganese, cobalt, or molybdenum, vanadium, wolfram or nickel, all of which we employ in steel-manufacturing. Based on the hammer’s compositions, it would be impossible to reproduce this type of tool with help of modern technology. It therefore clear that however manufactured this hammer possessed great technological skills. 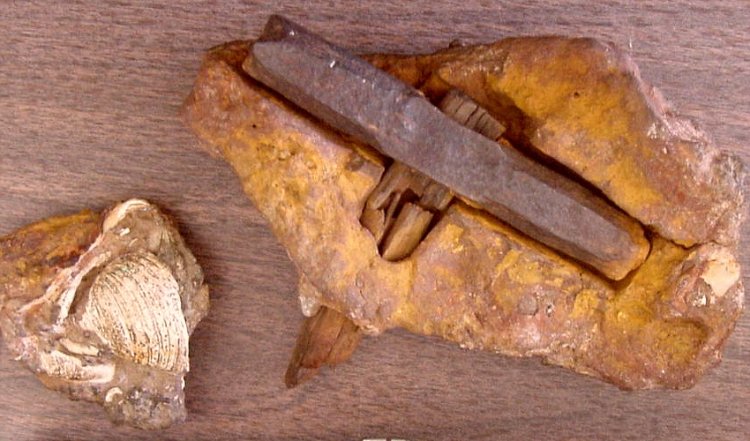 Where these antediluvian people perhaps introduced to metallurgy by an advanced ancient civilizations that was active on our planet during that time? Many ancient cultures relate how wise “sky beings” instructed them in sciences like astronomy, mathematics, metallurgy and agriculture. Who were these sky beings that our ancestors refer to in myths and legends as teachers of mankind?

Our alien gods, our ancient astronauts, were not only creators of Man, but acted also as our teachers.
Discoveries corroborating the existence of humans and antediluvian creatures occurred regularly not only in the United Kingdom, but in other parts of Europe as well.

In Germany, in a cave near the Bavarian city of Bayreuth, a priest named Johann Friedrich Esper found a human jaw accompanied by the remains of a giant bear. It was assumed that the now extinct bear lived in the days of the Biblical Noah, before the Flood.

In France, Boucher de Perthes discovered in 1832, in the area of Abbeville a number of stone axes, similar to those found by John Frere in Suffolk, England. Beside the stones, Boucher de Perthes came across the bones of mammoths, rhinoceroses, bison, cave lions, and other extinct animals, which dated back to time before the Deluge.
In Belgium, a doctor named Schmerling unearthed seven human skulls, a number of flint tools, and the bones of extinct creatures like the woolly mammoth and the European rhinoceros in caves. Dr. Schmerling concluded: “There can be no doubt that the human bones were buried at the same time and by the same cause as the other extinct species.”

The coexistence of man and now extinct animals is reality. This fact can no longer be explained away. There are too many fossils proving this point. It is obvious that someone was walking on this planet long before the first modern human appeared…

Author of “Voices from Legendary Times: We are a bridge between past and future.”

Ellen Lloyd – is the owner of MessageToEagle.com and an author who has   spent more than 20 years researching ancient mysteries, sacred texts, and the   existence of extraterrestrial life.
She is the author of Voices From Legendary Times in which she demonstrates that races of men have inhabited Earth for millions of years, but not all of them were human.

In addition, Ellen has written many articles about prehistoric alien visitations, ancient mysteries and alternative history.